My week is starting well when I find the time to do some sport. Yesterday I met my running partner again and we went for a ‘longer’ round (ok, we just wanted to pass the 5k mark). Since the Vienna Night Run is already next week, it’s time to make some effort! 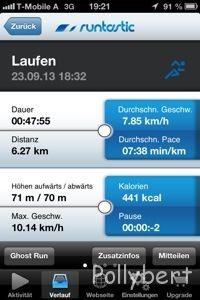 I know it looks like a cozy run but try talking the whole time while you run. This requires an excellent breathing technique.

After this excellent work out I rewarded myself with homemade vegetable soup (ok, the base was made with powder and I had to use two chillies to give it some flavor) and a lie-in on the couch with ‘Life, Universe and Everything’ by Douglas Adams. TV of course would have been a proper reward after the exhausting run, but the tv is broken. How I know that? There is only a white light visible when I open it. And that means either the second coming of Jesus or a broken tv. Since I don’t believe that Jesus would deign to appear on my tv (especially because I left his church two years ago) it has to be the latter.

Anyway, I am blabbering again and maybe this is not the right place to discuss all this. In the other hand why not? Ok brain shit up now. I must be very tired after HIIT. But what is my excuse from before?

Never mind, where did I get distracted before? Oh yes, I finished #3 of ‘The Hitchhiker’s Guide to the Galaxy

‘ trilogy. So only one part left. Yes, Douglas Adams was also a funny guy and his trilogy comes in four parts. If you don’t like it, take it up with him. Or not. Just looked him up and he died in 2001.

My brain goes off again, will shut it up now.