Riding on a hot dog 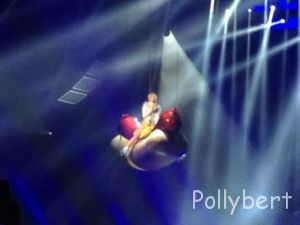 Last night I had the great pleasure to see Miley Cyrus perform. I wrote this sentence beforehand because I wanted to start my post with it. But after seeing her last night, I am not so sure about what to write anymore. Let me start by apologizing for the terrible quality of my pictures, I might have to invest in a phone with a better camera sooner or later. However the camera catches the sentiment of the show and gives a clear picture that I was definitely too old for this spectacle.

Let’s be honest here, I was the one who wanted to go. I love the song Wrecking Ball and after hearing her perform it on SNL I was hooked. What a voice and what great emotion she carried over with the song. I asked my niece if she wanted to go with me since she was a Hannah Montana fan when she was younger. And I had hoped that something of her fan love might have survived into her almost teen years. This was not the case. First she flat-out refused, the next day though she reconsidered (I am sure some of the guys at school told her to go) and agreed to come with me. Long story short, she wasn’t by my side yesterday because she has a very important exam tomorrow. Everything is still life and death at this age. 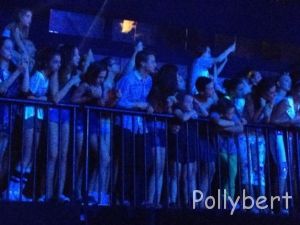 Anyway, I asked a couple of people and nobody wanted to go. How come? She is cool (up for discussion), can sing (no doubt about it), ok so her fan base might be a bit young, but I was sure there would be older people too. Which was definitely true. Lots of parents! In the end my friend Tina relented and went with me. She at least is a mother (and so fits with the other parents from our age group) but her daughter would never be caught dead at this concert. It started shortly after 9pm and I wondered if these little kids needn’t go home already?

What I noticed right away was that the music was too loud. I hate it when this happens, sure sign that I am at my age limit (it happened on vacation too, so embarrassing). At least my friend thought so too but since she is the same age as me, it’s not really a consolation age-wise. The music was not only too loud overall, it was also to loud for her voice. And she has a strong voice which definitely can carry a tune. But last night I could not make out any chorus to sing along least alone individual words. Of course I was not prepared enough, I had listened to her album only once. But usually one can mouth along the words after the first couple of lines. Not in this concert, though. Also the girls including their mothers made an ear-splitting noise. My ears were still ringing when I was finally in bed last night. 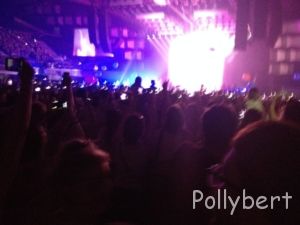 So was it worth going there? Not for me really, for the others…probably. For all the little girls and some young guys (so weird seeing also groups of guys there, really don’t want to know what they were dreaming about last night) it must have been a great show considering the screaming level and the dancing that was going on. What was fascinating as well, is that people are enjoying the show through the screen of their phones. First song, all hands were up in the air and in their hands they held a phone. Interesting phenomenon, in my time and age we all had a lighter and swayed along. At least today’s youth seems to not smoke anymore. Still ‘Wrecking Ball’ was great hearing live and of course it was the last song!

By looking now at the pictures from last night it’s pretty clear from the stage setting that the target audience is younger. Not only younger, but young. Which doesn’t really go well with the explicit gestures. But that’s probably just me.
Yours, Pollybert 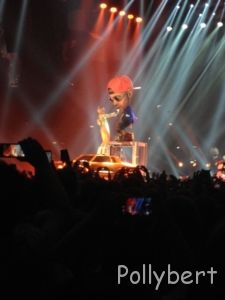 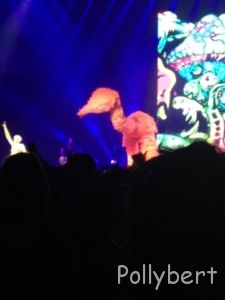 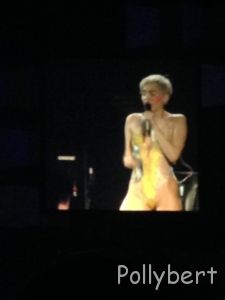 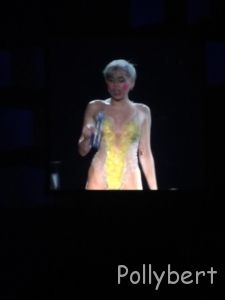 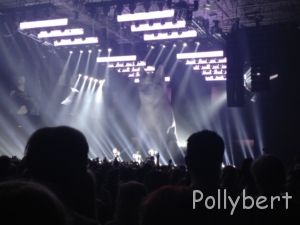 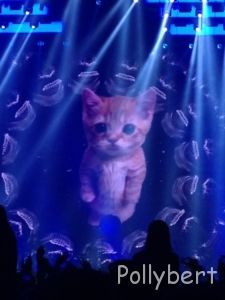