At 8am we said goodbye to our Australian friends Angie and Peter and at 11am our shuttle boat picked us up. There would be no private shuttle tour to our new destination, I had insisted on public transfer.
The shuttle boat took its time to pick every on up and only when every available seat was filled did we go to Ban Nakasang. 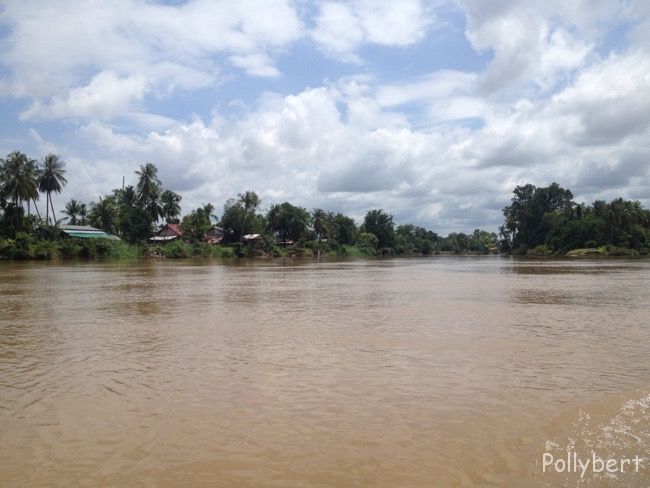 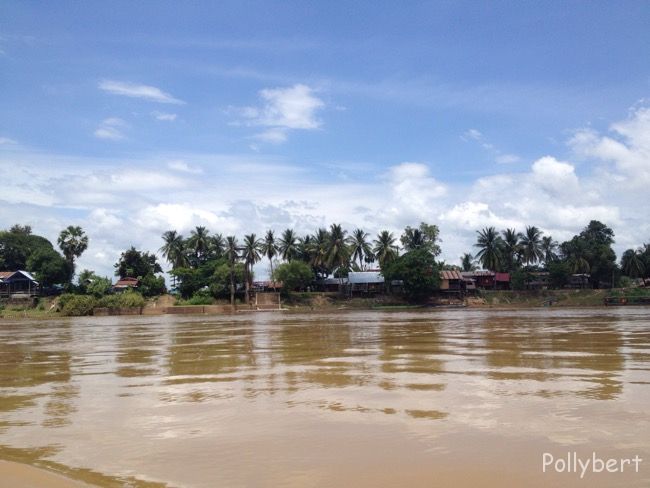 So the little place we saw at our arrival three days ago was the official gateway to the islands. We made it from the boat with only a little accident (this time Dudley fell, but in another boat) and were then transferred like sheep to the bus station. There we boarded our minibus and since I had insisted on drawing some money from the ATM we were the last to board. Big mistake, really something I have to remember: Always be the first to board a bus. Dudley and I sat in the last row and he was more than uncomfortable due to his size. To make matters worse he told me what could happen with the minivan (accident wise) so that I had to tell him to stop his horror stories otherwise I would start to panic in the confined space of the last row with no way out. I kept on reading and tried to loose myself in a different world. 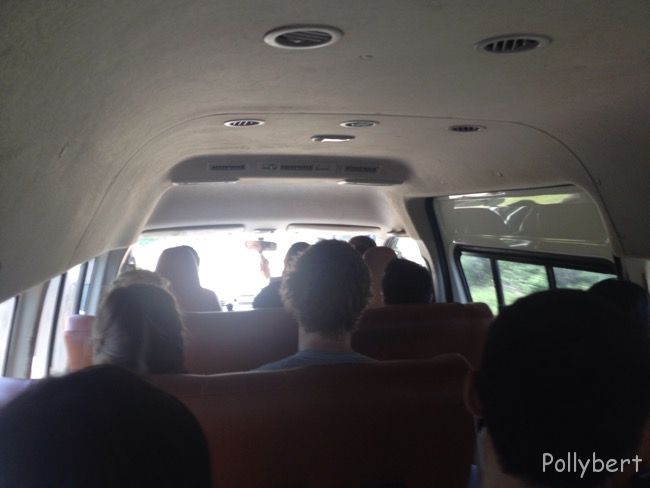 But all good things must come to an end and so must also must bad things. Eventually we got off the bus with the station Champasak being in the middle of nowhere. Literally there was nothing there. We had just time to ask in which direction the Mekong was because we knew we had to cross it and then the bus left.
When we started walking with our backpacks and my front pack I felt already tired. And when Dudley showed me on his phone that the Mekong was easily 5-6km away I slightly despaired. How could our Australian friends send us into this nightmare? 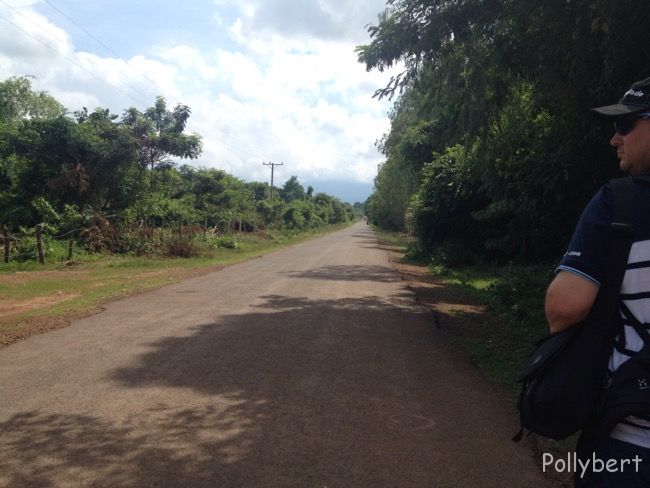 We walked for at least two km, all the while trying to hitch a ride. But none would stop or they would just slow a little and then drive on. If I had been alone, now would have been the right moment to sit down and have a good cry. I was tired, I was hot and sweating and I was exhausted. But since we were two I couldn’t do that and so just drudged on. And eventually, oh miracle, a car stopped to my hold out thumb and we got on its cargo area. 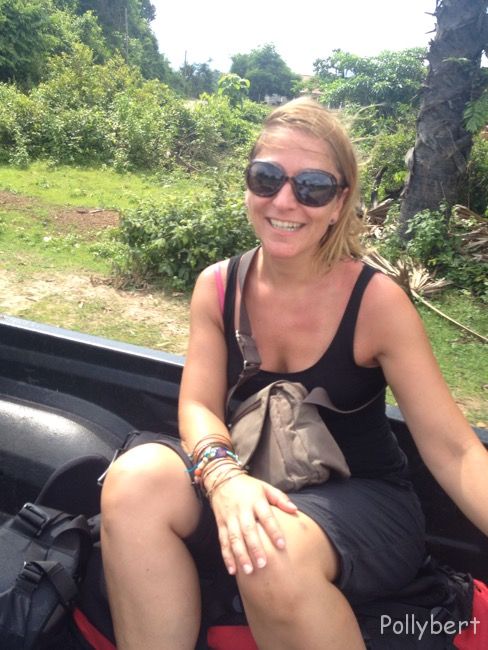 This wonderful lady gave us a lift to the boats (I am sure it was more than 6km) and we had no trouble to cross the Mekong. 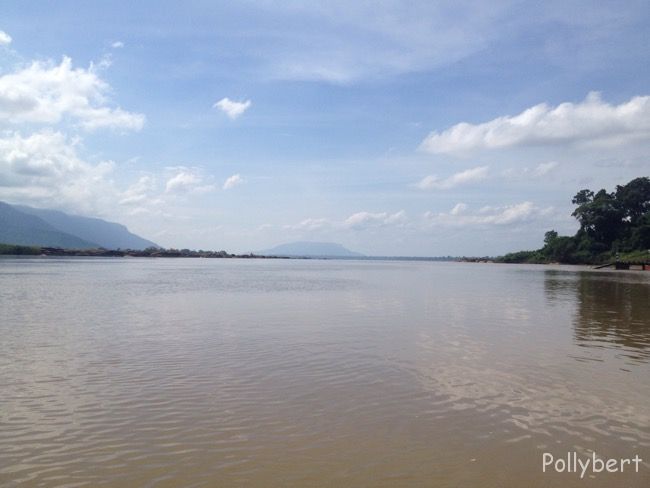 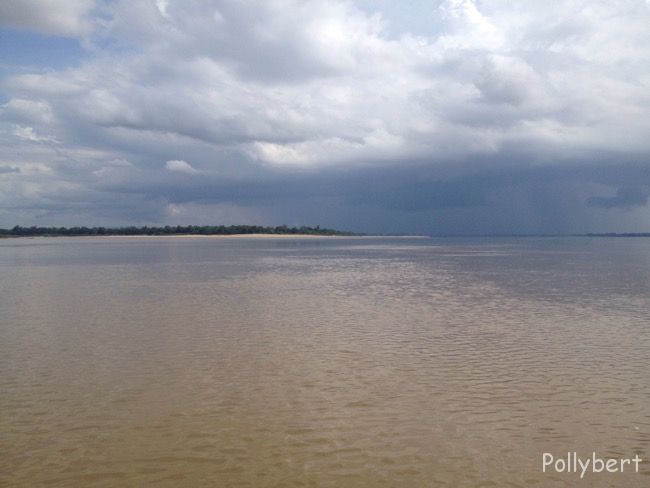 Once we were on the other side we had finally reached Champasak. 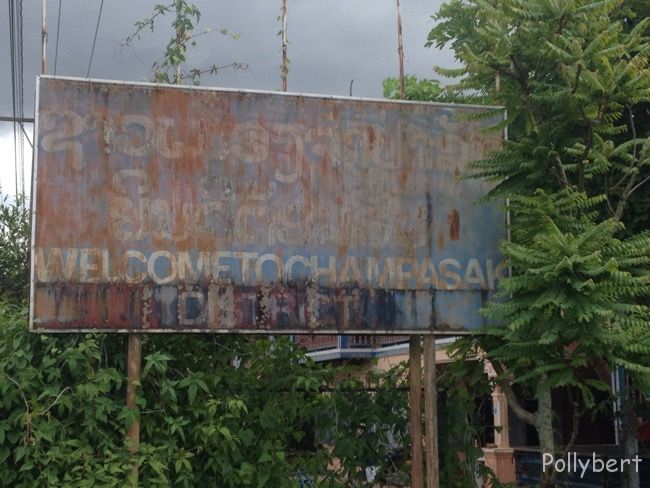 Again we had no ride and were told that the hotel was just 3km away. With a storm threatening we walked as fast as we could when suddenly a minivan stopped and offered his services. With its driver it was the first and only time that I spoke French in Laos.

So with a couple of miracles and angels watching over us we made it to our Hotel Inthira before the rain started. Quite a feat! 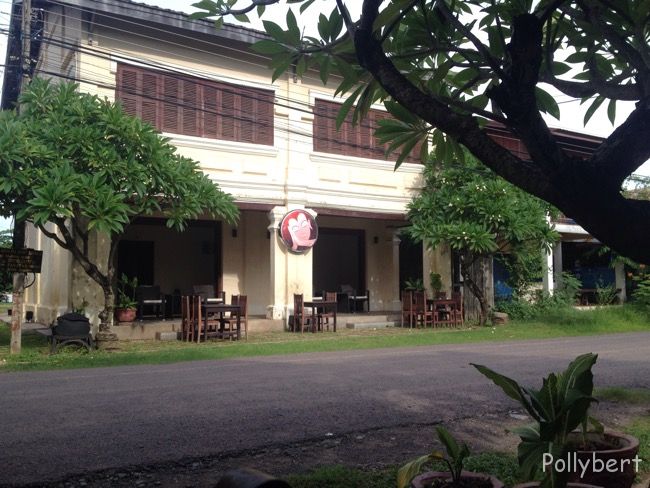 And here the view out back from our rooms across the street. 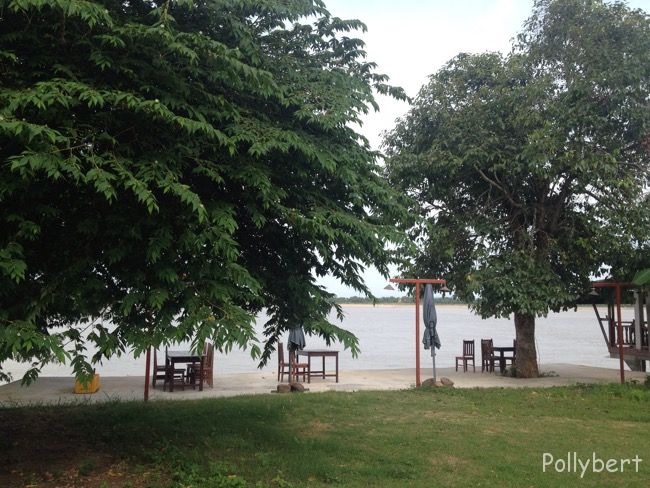 Champasak had not really much to offer as we would notice shortly after checking in. Dudley and I walked up and down the main street, visited one of the many temples and then bought ice cream. There was not much else to do. 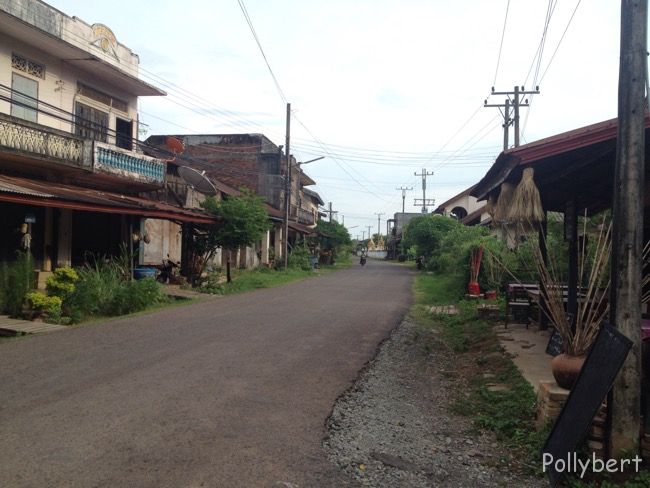 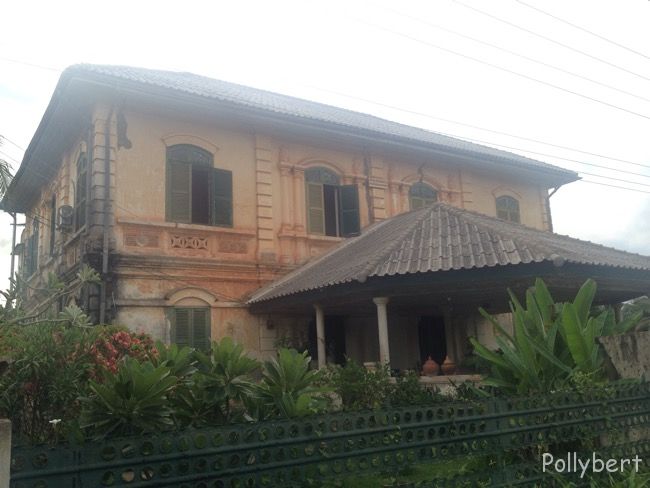 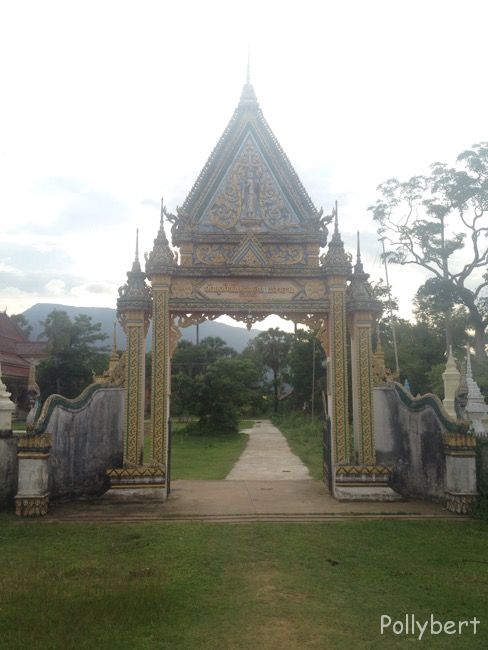 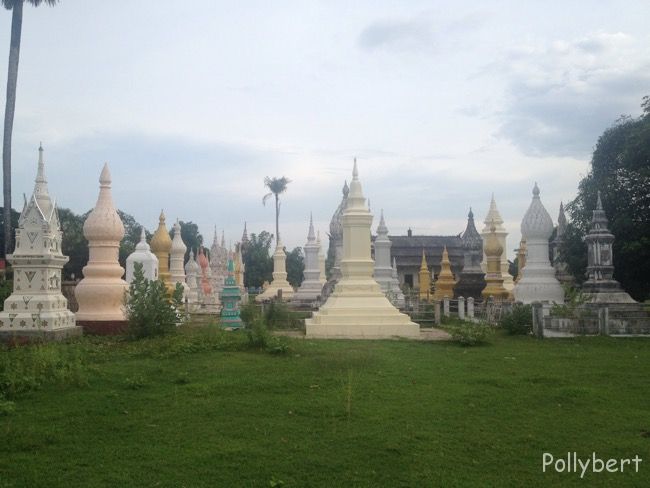 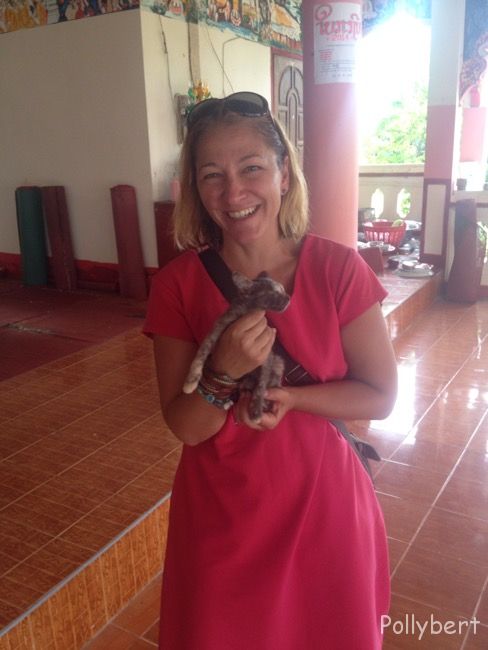 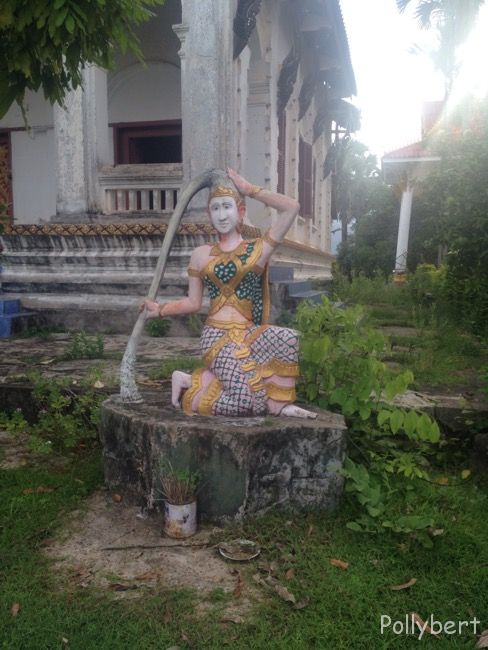 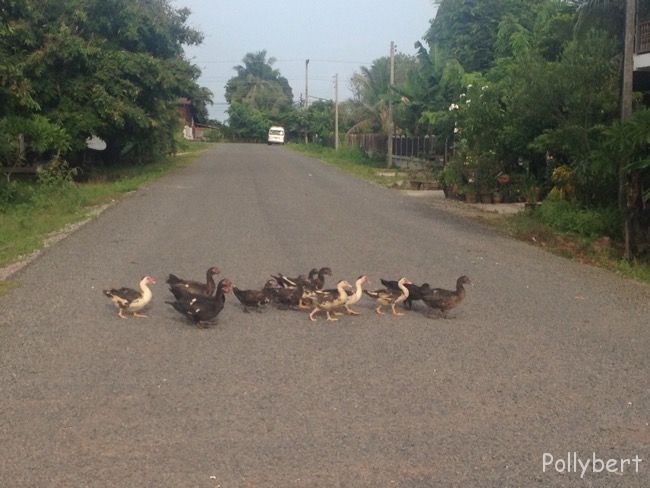 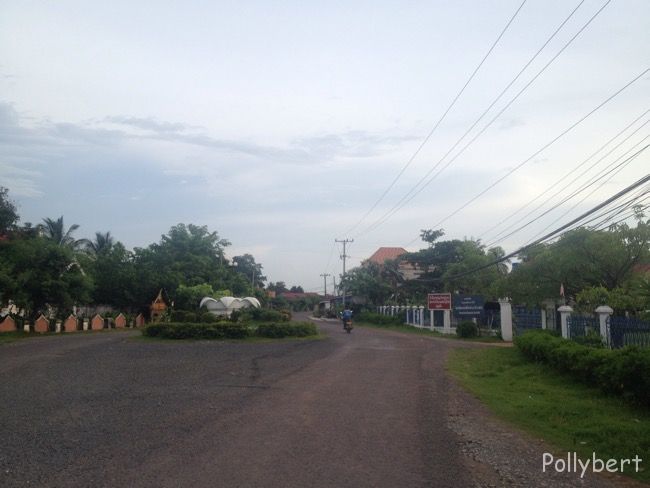 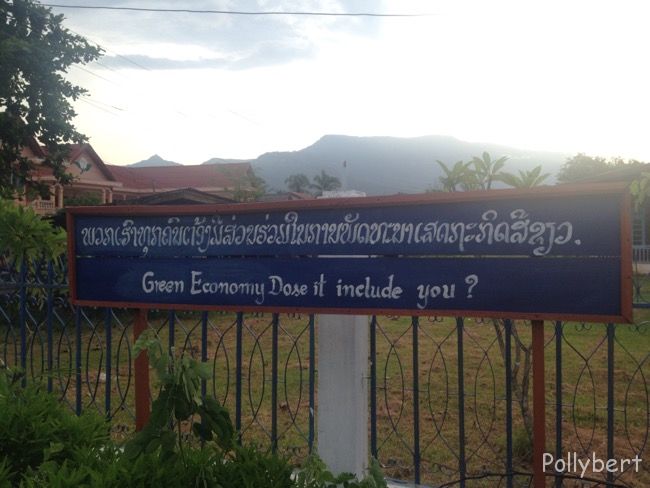 After a short power nap during which it had started to rain in earnest we met for dinner at the hotel restaurant and I enjoyed a local delicacy called laab. Minced meat with lots of herbs especially mint. Very tasty and just a bit spicy. With this new experience under my belt I was ready for bed. Yours, Pollybert 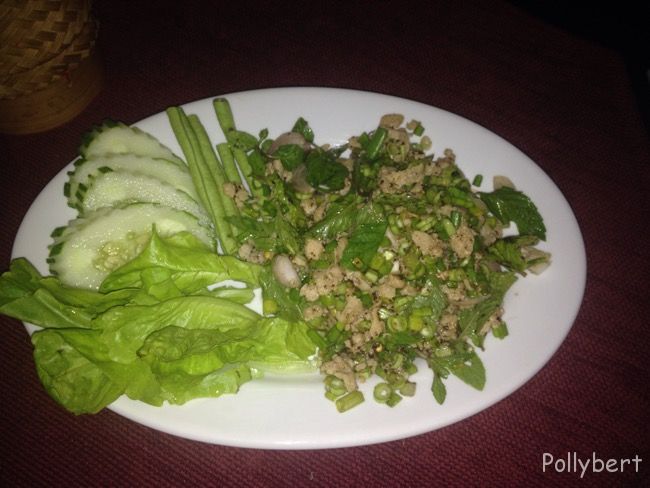