A weekend in London

London is a city that over the years I have visited repeatedly and it still doesn’t get “old”. So when friends and I hatched the plan to fly there for a short weekend, I was excited. The idea was to get in late on Friday and then just go with the flow. No plans were made on what to see and what to do. Sometimes these are the best weekends. 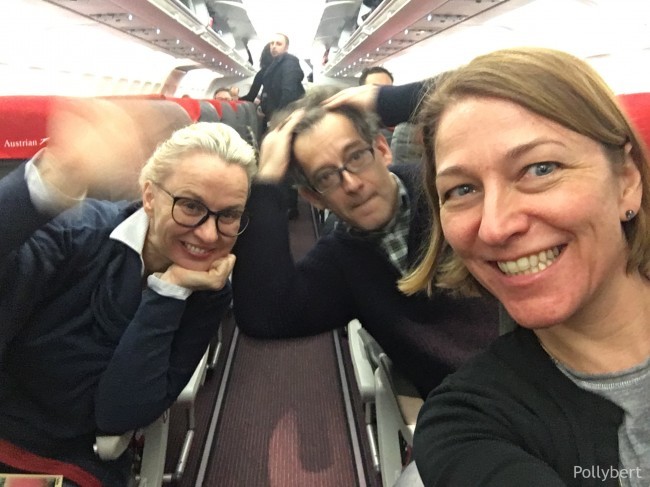 on the way to London

Our hotel was in South Kensington, a five minutes walk from the Earl’s Court tube station. Very convenient if you arrive at Heathrow since the Picadilly line takes you directly there. The hotel itself, the Ambassadors Hotel, has a grand name but doesn’t live up to it. It is however, as already mentioned, in South Kensington and for London fairly cheap.

Not much was done on this first evening except go for a very late dinner and then off to bed. Nobody was in the mood for G&T which I found exceptionally sad. At least the burger was great at Byron although once we ordered we saw a mouse running through the restaurant. Speaks for their love of animals though. 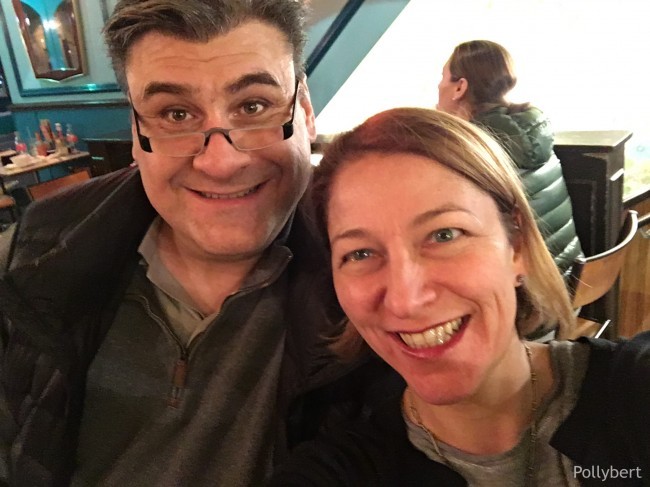 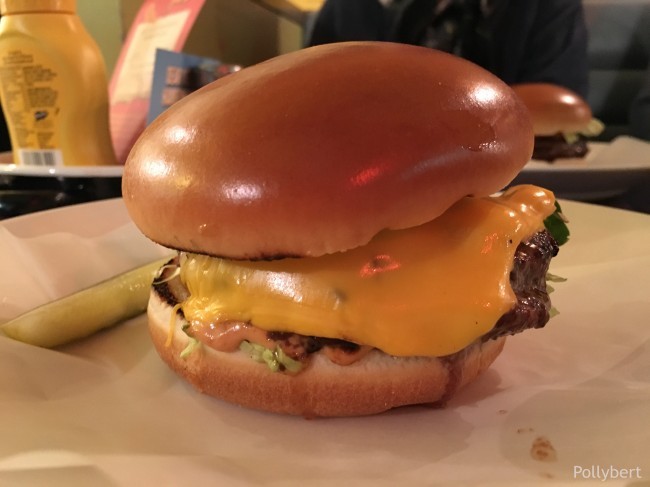 my burger at Byron Hamburgers

For Saturday shopping was on everybody’s agenda, so after a lengthy breakfast at Muriel’s Kitchen we headed to Bond Street and spent the day leisurely visiting shop after shop, enjoying a much-needed G&T (by me) inbetween. There was much to see while walking around including a demonstration against dolphin slaughter in Japan. 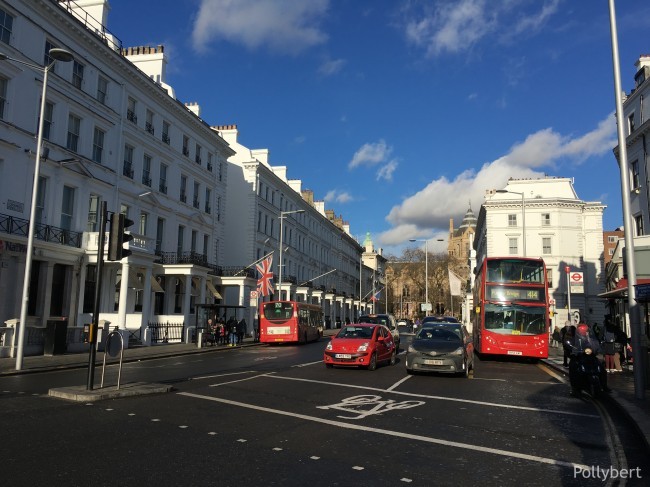 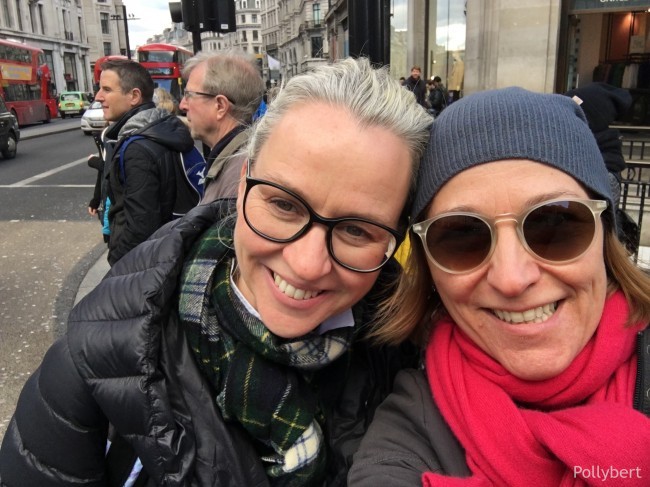 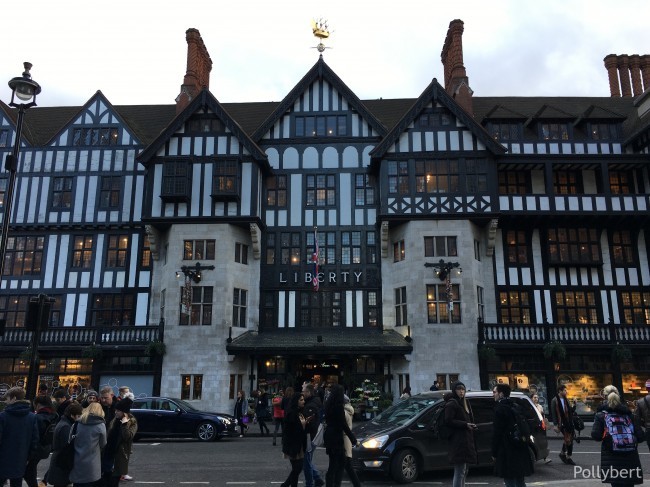 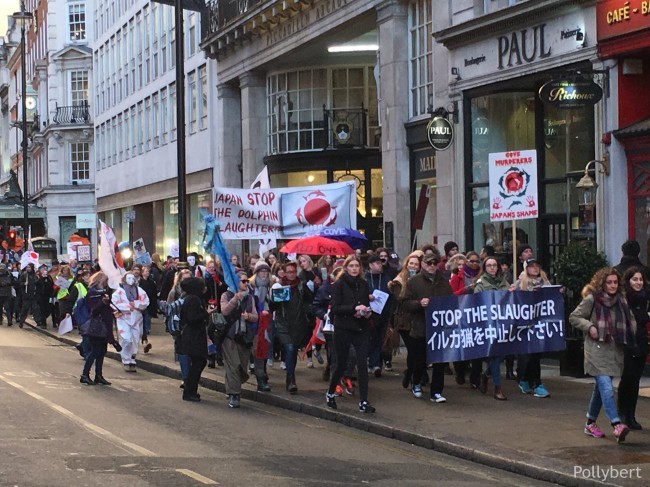 Finally we found our way to London Bridge and with it The Shard. The building is amazing and the view was spectacular. But is it worth the price? I don’t think so. Especially as there are similar views for free to be had in this city. Since we were already on top though, I took quite a lot of pictures. It was stunning after all. In hindsight it would have been better to be there earlier, either at sunset or just during the day. 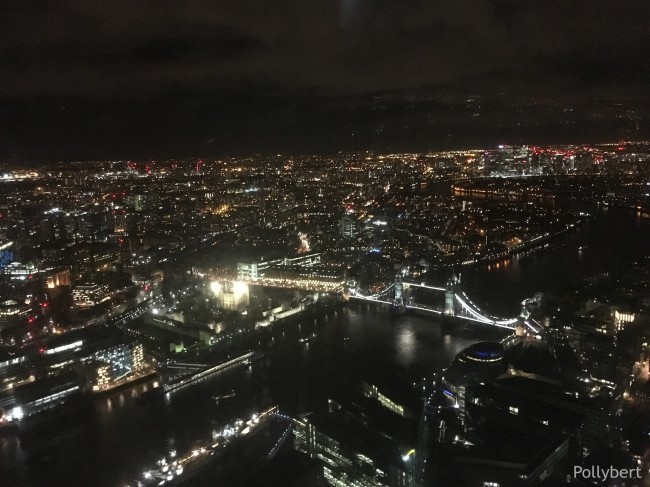 the Tower Bridge from The Shard @London 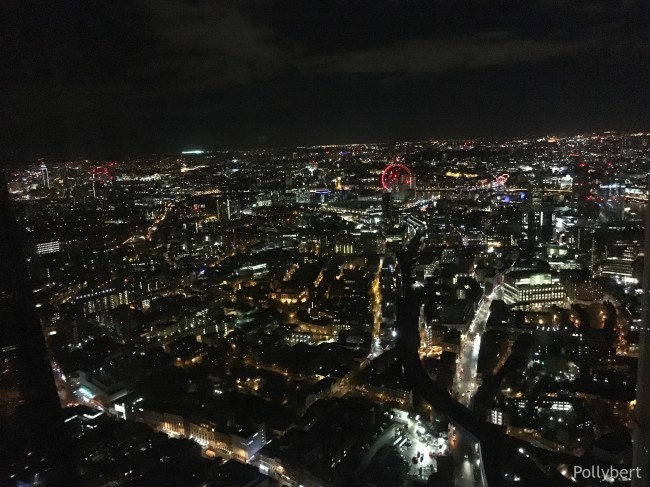 the view from The Shard @London 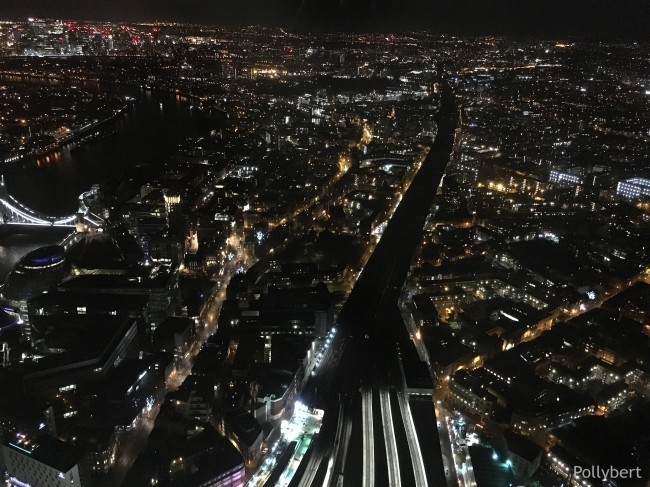 The next day started bright and early and, can you believe with it, with mass. Being someone who firmly eschews religion and all its related discussions, I am wondering myself what happened here. But Temple Church was on my ‘mental’ have-to-see-list (as you know there was no list for this trip) and due to it being closed except for religious services, a service it was going to be.

Temple Church is the oldest gothic church in London and therefore a must for any history lover (also a must for any Dan Brown, Freemason or conspiracy lover). The plan was to attend the early morning service and take a quick peak. That was easier said than done because instead of the expected crowd, there were only four people present. The priest, his acolyte and two worshippers. So much for seeing the church with stealth. We sat through a short mass, received communion and then introduced ourselves to everybody else. With the permission of the priest we walked around the church and took a good look at everything. 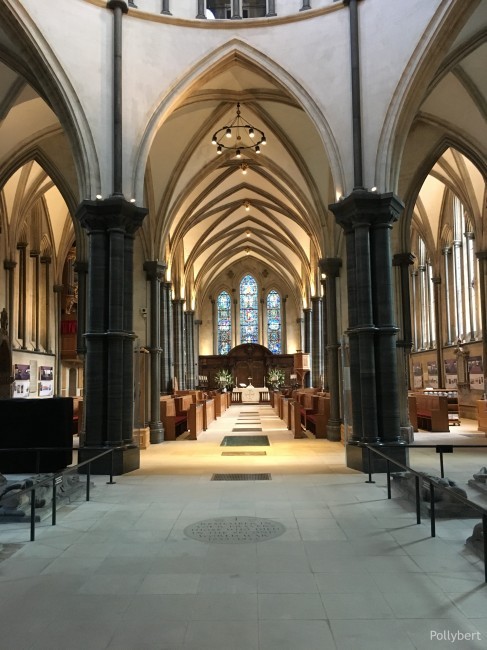 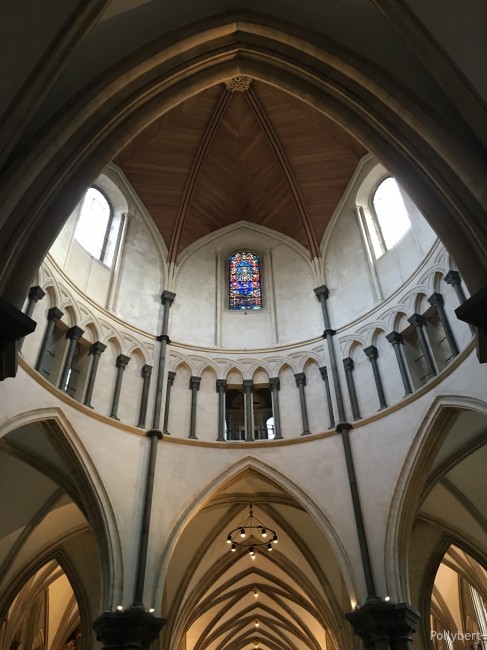 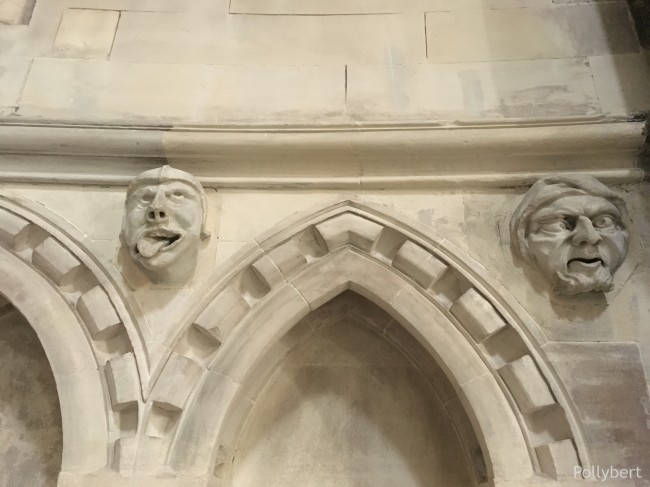 details from the Temple Church @London 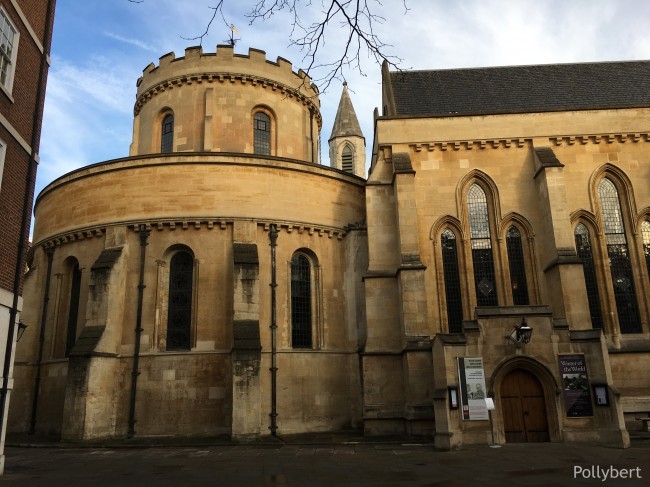 As you can see there was no one around. Temple Church doesn’t appear to be on anybody’s must see list of London. This of course only changed once we headed back to the tube and exited at Westminster Abbey for a short stop. We felt lucky enough to catch a second service (the abbey was also closed for that Sunday except for church activities).

No such luck at Westminster Abbey, we found only closed doors but tourists in abundance. Nevertheless we took some pictures, it’s not as if I am in London every weekend. The Abbey of course was so impressive in its grandeur and really beckons to be visited the next time. 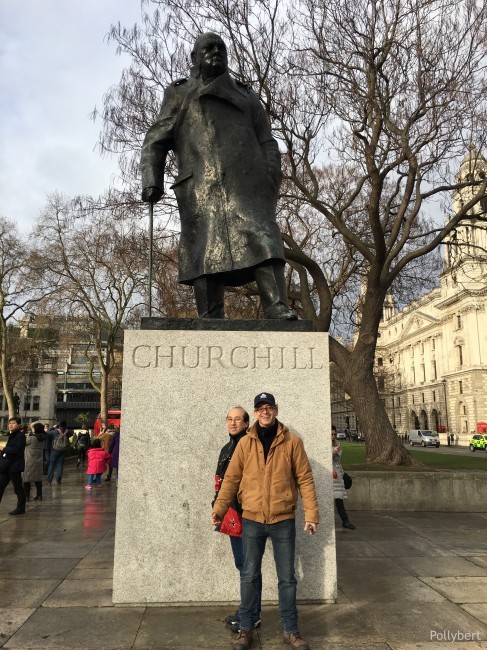 Churchill still has got fans @London 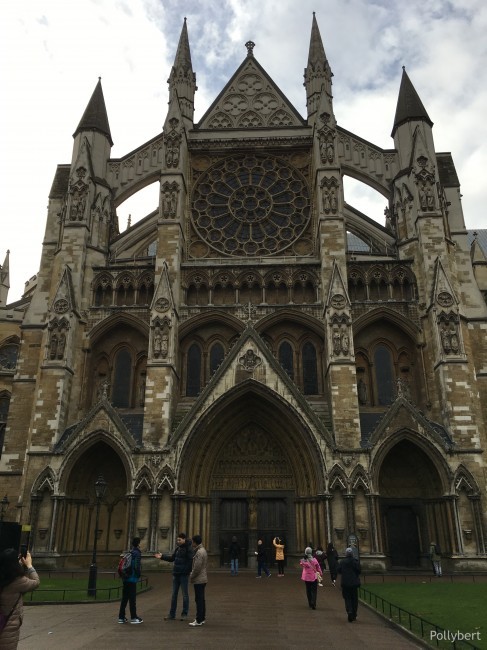 side entrance to Westminster Abbey @London 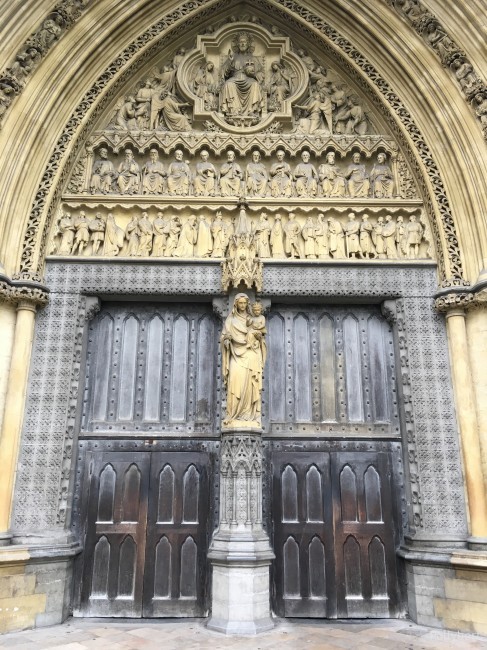 Then it was already time again to meet the others. Which we did at Muriel’s Kitchen (the food was to die for) but this will be a separate post. We split up again and with my church companion I headed to the British Museum. I always love to go there, the entrance alone is worth a visit. But times have visible changed since I entered it the last time and the security checks are getting more and more annoying. Nowadays everything comes with a line-up. 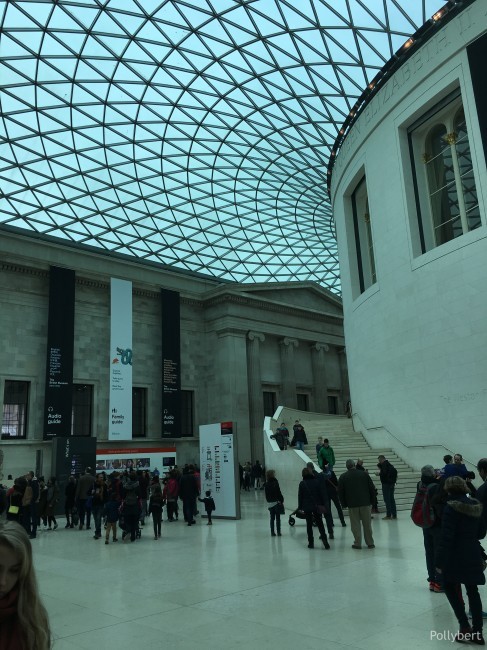 And that was it with my London trip. We had just time for another cup of tea and a cake. Two days in London in definitely not enough, but to revive my love for this city it was a good start. As you can see from our going-home picture, some of us were really successful with their shopping! I was too, I got two new books. One about the Plantagnets and one about the Tudors. What more does a girl want? Yours, Pollybert 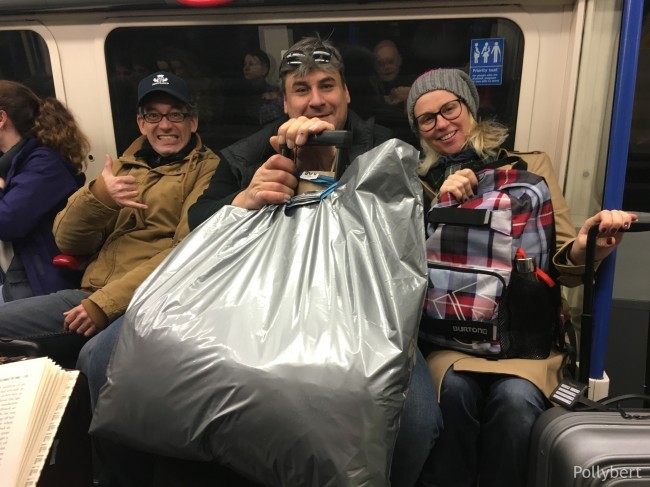 on the way home @London