The next morning we got ready and carried our bags the five floor down ourselves. I definitely had packed too much, the thing weighted 18kg at check-in in Vienna. We got it all down and deserved a good breakfast for it. In the cosy courtyard we ordered porridge with fruits and tea. 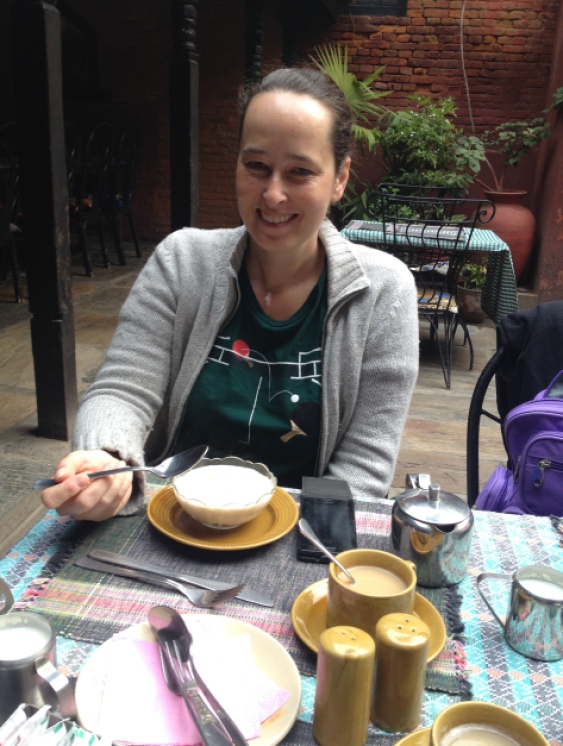 Not long after our driver came and brought us to the airport in Kathmandu. We were a bit early and had to wait in the hall until our flight was up on the board. 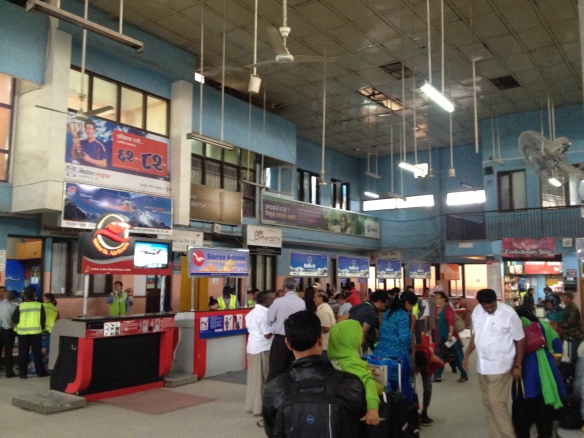 This time I had my passport copy ready (our passports are with the agency to secure the China visa) and we got our boarding passes without a problem. One more coffee and we were up in the air. 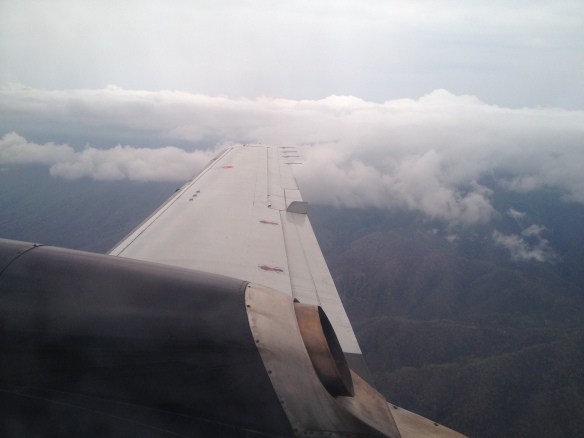 Even on a short flight like this (flying time was 30 minutes) we got water and a sweet. In no time at all we arrived at Bharatpur airport. 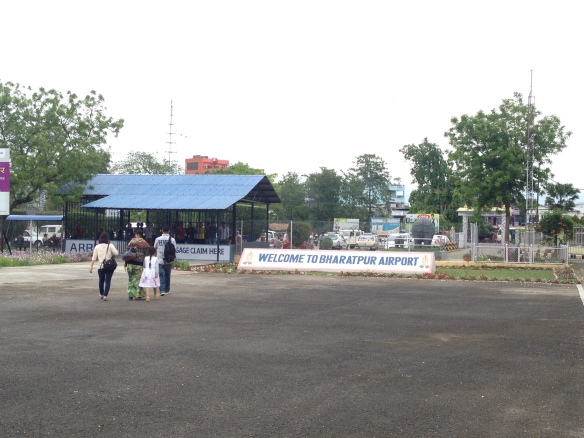 Madan, our guide from the Hermitage Hotel, was already waiting for us at the small arrival area and after a little discussion if we were staying at his hotel (but since no other two female tourists were on board, it was clear that it was us) we made the 30 minutes drive into the Chitwan National Park. Here we would stay for a three day – two nights jungle tour.

We arrived at the hotel and were told to get settled in our cabin and then come for lunch. I had just taken a picture for Facebook and was getting ready to go outside when all of a sudden everything started to shake violently. Sylvia called to get outside and join her which I did after I locked the door. We stood on the lawn in front of the bungalows, joined by two German guys who lived next door and waited through the earthquake. It was a weird feeling but none of us were frightened since nothing happened except that the earth shook. So when it was finally over (took ages for the first quake) we talked about how strong it could have been while I took some pictures of the garden. Sylvia just hoped that it would not get in the media. 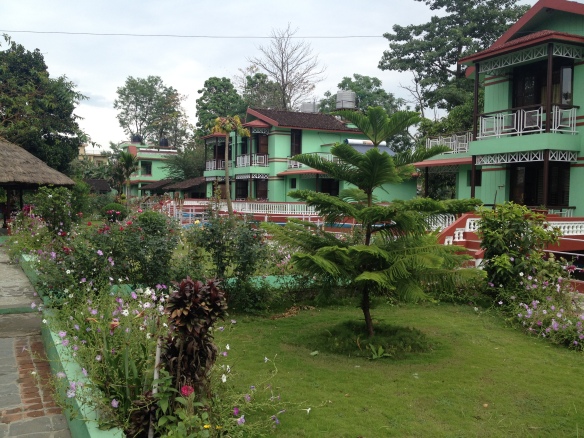 Eventually we made it for lunch where we joined a Chilean couple on the terrace. During the main course the second quake hit and I was more frightened by the screaming waiter who urged us to follow him down into the garden. Which we girls did while the guy from Chile kept on eating. I think Sylvia was more afraid that she couldn’t finish her meal. I know all this sounds weird to you especially after the quake made headlines all over the world and so many lives were lost. The  ramifications of it were not clear to us at the moment, but in hindsight we were super lucky. 90 minutes can make a huge difference.

We spend the afternoon in the garden looking down at the river and hoping for a crocodile to magically appear. Sylvia checked the internet and by then the quake had already made it into the news while was trying to update my blog (I am way behind, sorry). 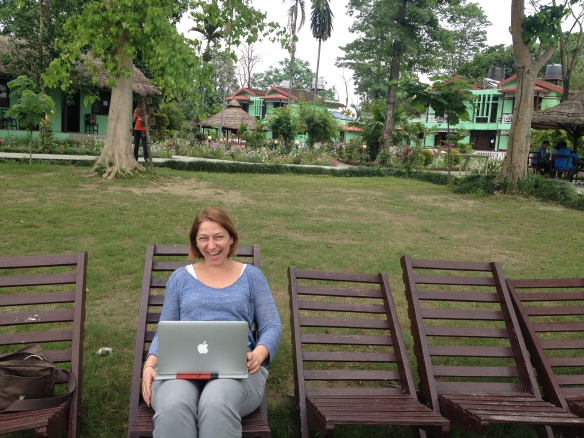 Around 4pm we got ready for our village walk with Madan. We saw some traditional houses from an ethnic group that came into this region from the mountains. They built their houses from mud fortified with reeds which they also use as a roof. But since the reeds need to be changed after the monsoon more and more were covered with a corrugated sheet. 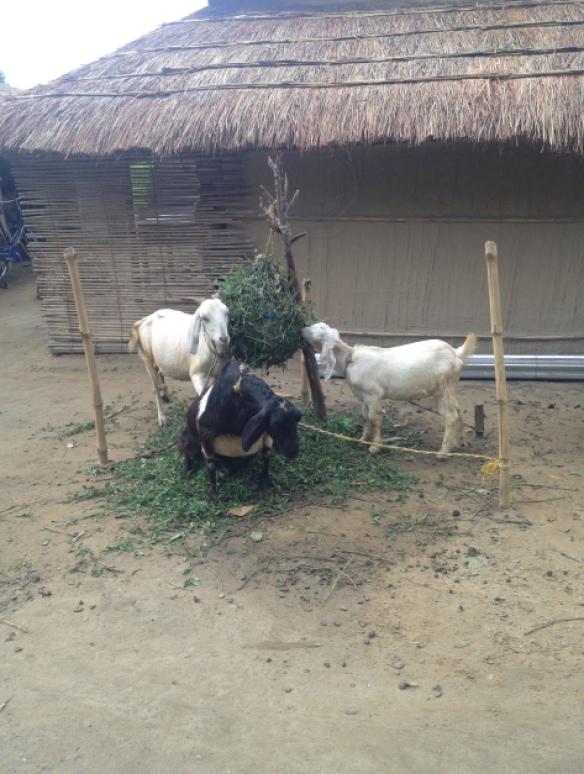 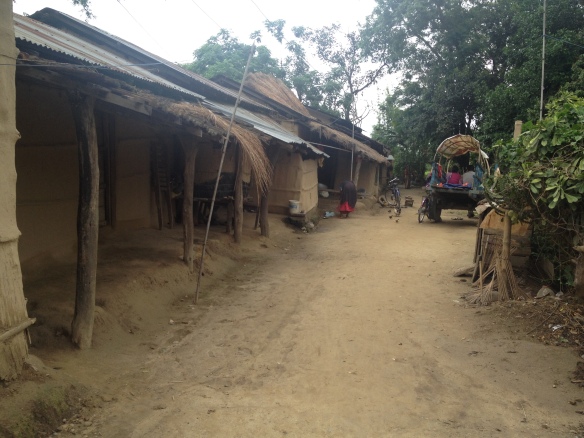 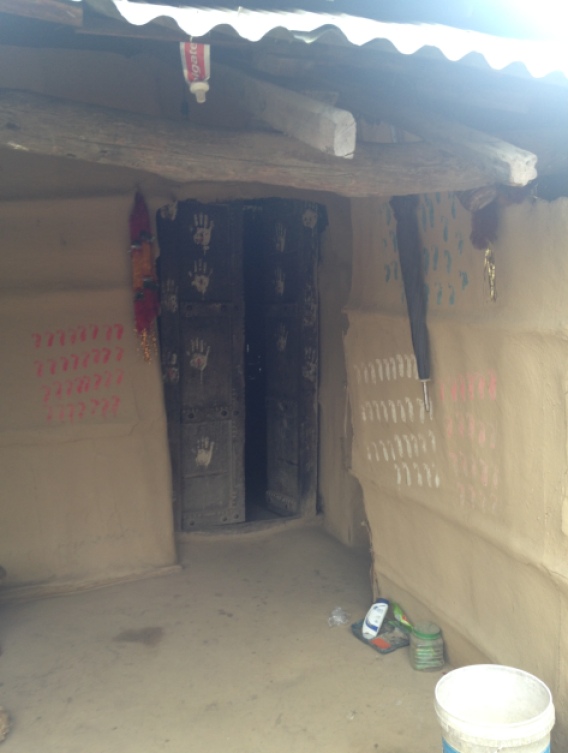 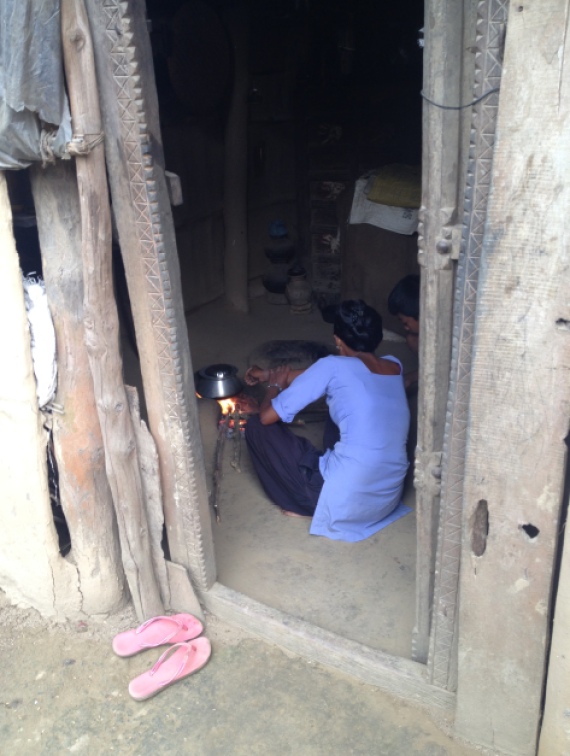 On the walk through the village I finally got some stamps and Sylvia another Ghorka knife. And we saw some interesting transportation. 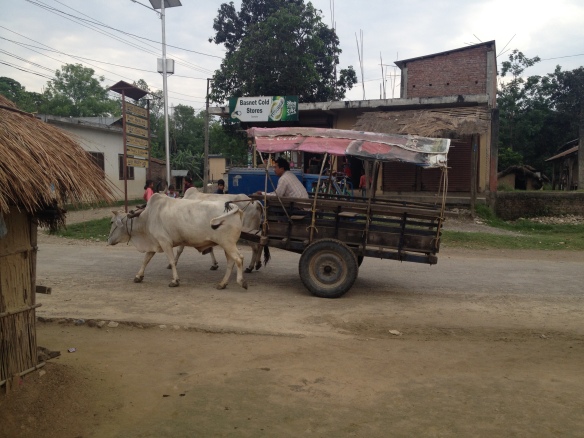 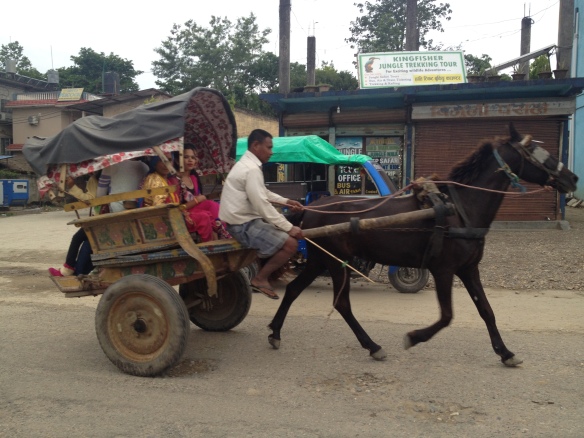 The walk lead us to the river where we spotted our first rhino footprint, easily recognizable but its three toe nails which leave a distinct imprint. The elephant by the way  has five toes in front and four in the back. We walked along the river to spot some more birds (mostly too late for me to take a picture) and to get a feeling for the national park. 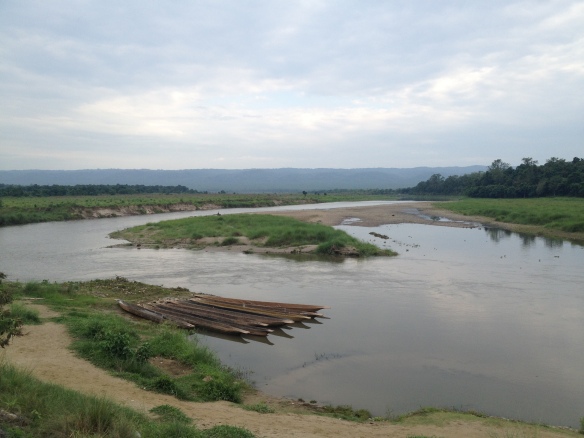 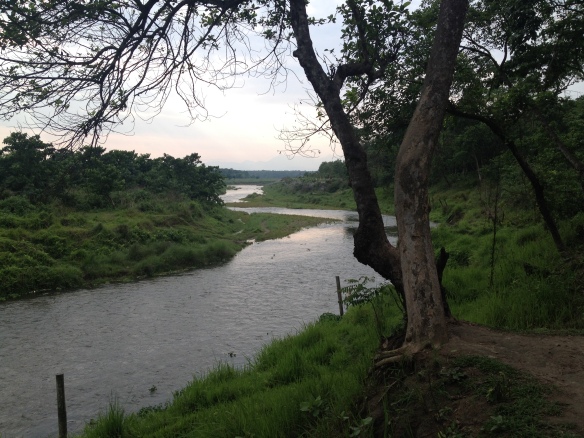 The destination for the village walk was the elephant station where the park rangers where training the animals. These elephants would come to warn us whenever another quake hit. 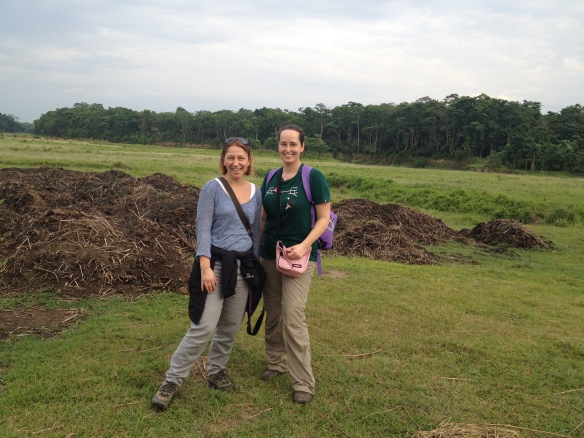 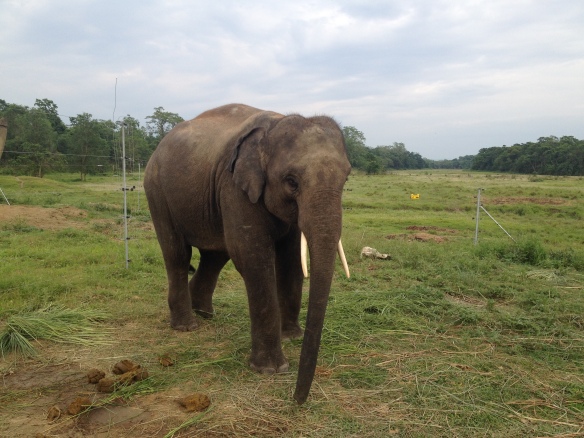 On the walk back the light had already a beautiful quality and the sunset looked very romantic. We made it back in time to have the last of sun at the hotel while enjoying a cup of coffee as sun downer (ok, maybe I had a beer). 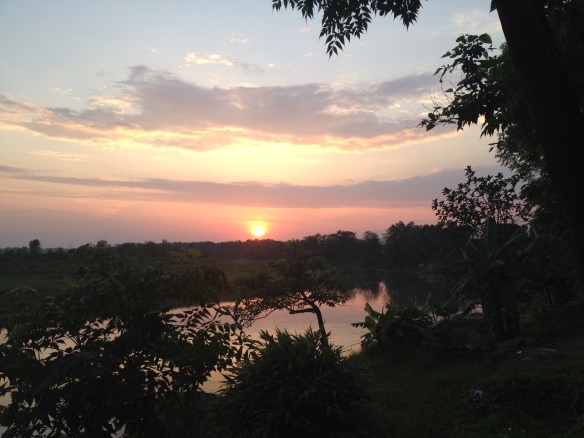 Dinner was a tasty affair with the typical Nepali Dal Bhat and a picture for the worried relatives at home. 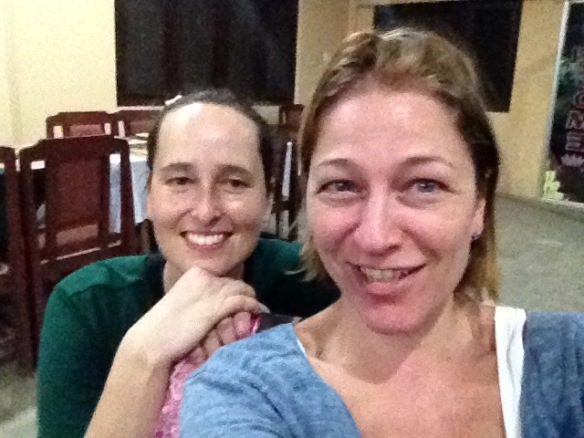 And to top this day we attended a cultural show at the village center. The tourists from all over the park got brought here to watch this typical dancing spectacle. 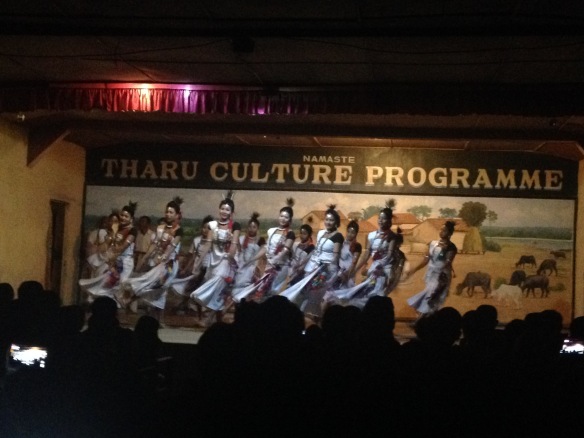 There were more quakes during the night and Sylvia felt each and every one while I missed most of them. I appear to be very insensitive in regards to tremors (and maybe other stuff too). We got woken by an elephant for a larger quake during the night which I felt as well this time. But both of us made no move to leave our bed, we already knew that nothing would happen to us at Chitwan National Park.
Yours, Pollybert