I was booked on the overnight sleeper from Hanoi to Sa Pa in a 4 berth soft sleeper compartment. When I arrived in my compartment three people were already there but only in two beds. I was ok with that since the two little girls were really quiet and shared their bed. The fourth one was a Spanish girl who partied next door.

Since it was already late and estimated arrival time was 6:30 with a full day of trekking ahead, I just relaxed in my bed and fell asleep in no time. At our arrival in Lào Cai we met our driver who took us up to Sa Pa which was a 45 minutes drive away.

The train station looked really modern, but I don’t know what it was used for. Because neither at my arrival nor at my leaving was I anywhere near this new building. I got on and off at the old part.

On the way up it was raining lightly and when looking out of the window the scenery was very different from Hanoi.

At the Panorama Hotel we were greeted by a woman who told us where we could take a shower and have breakfast. Our guide would pick us up at around 9:30. Enough time to get ready. While walking up to the hotel the difference to Hanoi was even more pronounced. I was now in tribal area.

While eating breakfast the rain kept on going steady, not a really good sign for today’s trekking. But I also noticed that the houses had a European appearance.

By the time our guide came I was fully awake and ready to go. I took off with 2 women from Singapore and a couple from Norway. Our guide, called Mù (or so) was 21 and accompanied by her mother who carried her nine months old son. The mother by the way was 49. More important than that, please check out the shoes. This will be very important for tomorrows trek!

Today’s program consisted of two village visits, first Cat Cat and then Sin Chai. Even looking back now on the pictures I am not sure where exactly the second village was, but we must have been there because I asked the next day and was told it was around the rice fields.

Anyway we started directly in Sapa going down to the tourist village of Cat Cat where there was one shop after another. Shop is maybe too hard, but since the area is living mostly from tourists everyone wants to sell you something.

Slowly we made our way to a waterfall within the village which had a small theater.

At the theater we saw some typical trial dancing that didn’t really impress me much after the long hair village. On we went in the direction of our lunch when we found some indigo plant along the way. Nils was brave enough to explore the qualities of this color giving plant.

And here the result which of course showed only a while later. Mù said that after two hand washes it would be gone. Cannot confirm it, he still had it the next day during our trek (and his wife confirmed the washing).

Through the rice terraces we went up, nearer and nearer to our lunch stop. The going was very steep from time to time. Living here seemed to be very exhausting. 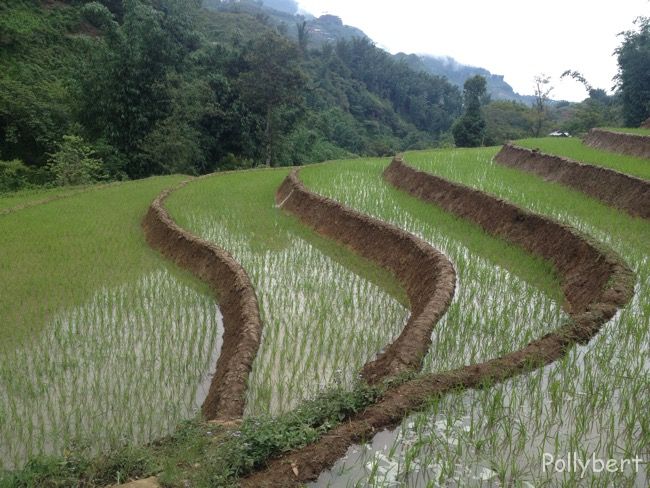 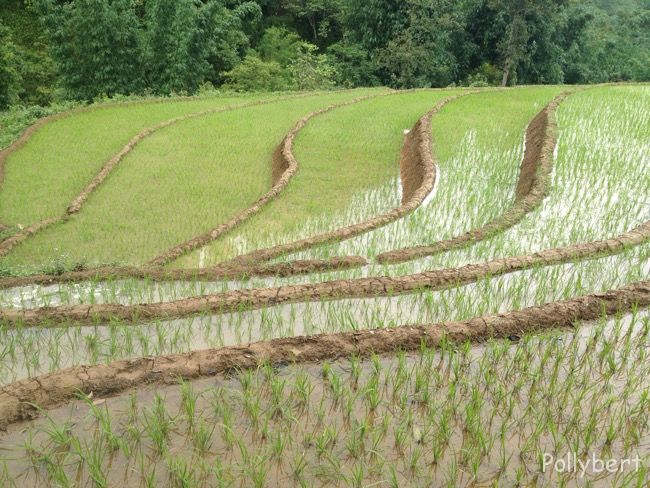 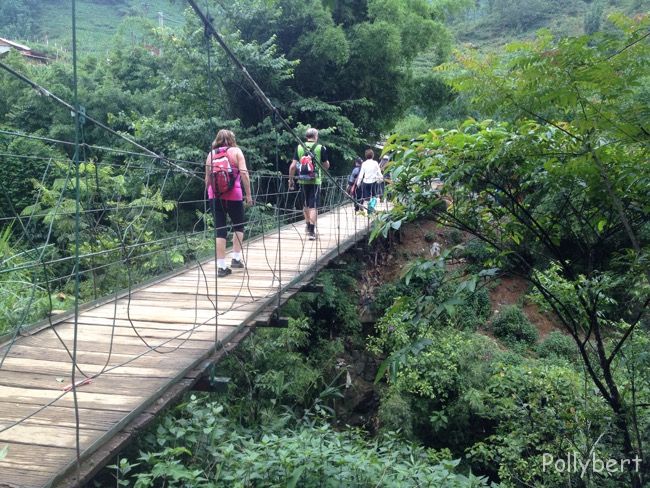 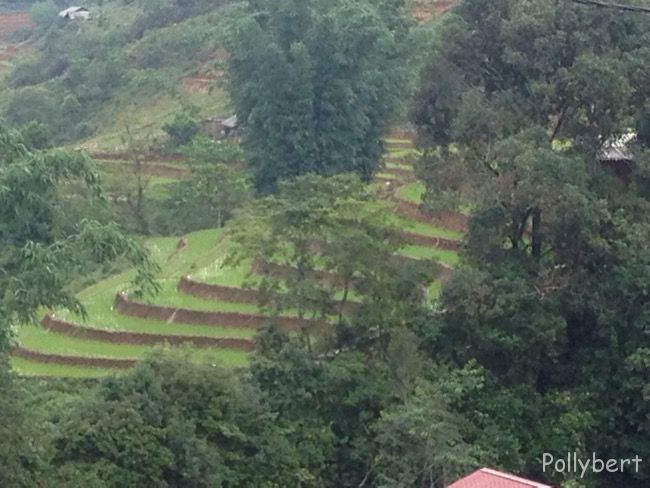 The highest peak in the region was the Fanisipan with 3.143m, not that we went up there. And anyway, after Tibet the altitude wouldn’t have been a problem.

When we finally reached our lunch destination some of the group were completely spent while I felt we had done a long walk. But it felt good to sit down at this very simple place where the food had been brought in from the hotel. Never on this trip before when doing a tour had food been delivered to a lunch destination (I really wonder why this was done here in Sa Pa). Anyway, what we got was good and enough for me. Helena from Singapore asked for seconds which were not available. 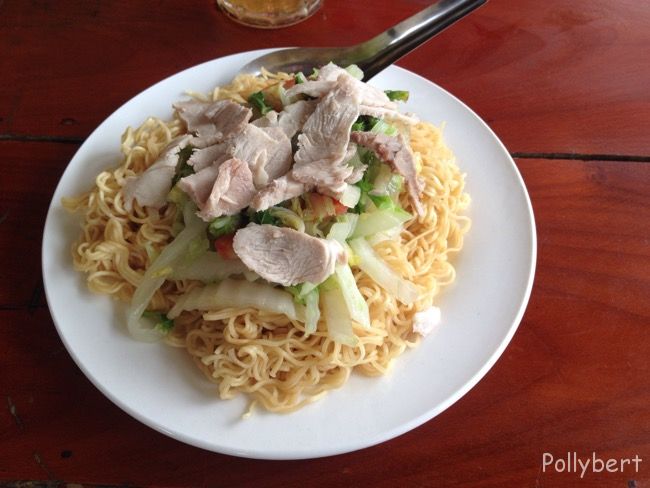 After lunch Mù asked if we wanted back to the hotel or trek some more. I was all for trekking and Nils and Fenella came along while Nils wife Randi and Helena stayed behind.

What we did was not really trekking again but for about 45 minutes Mù led us through the rice fields. Walking on the narrow ledge was a tough balancing act. So when we turned back to our missing group members even I was happy. 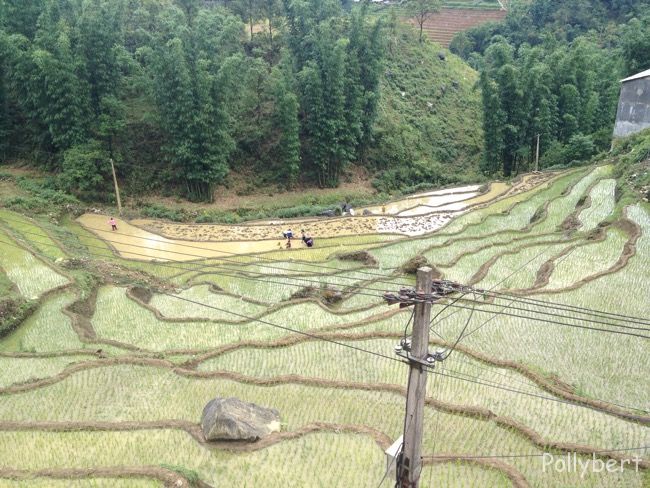 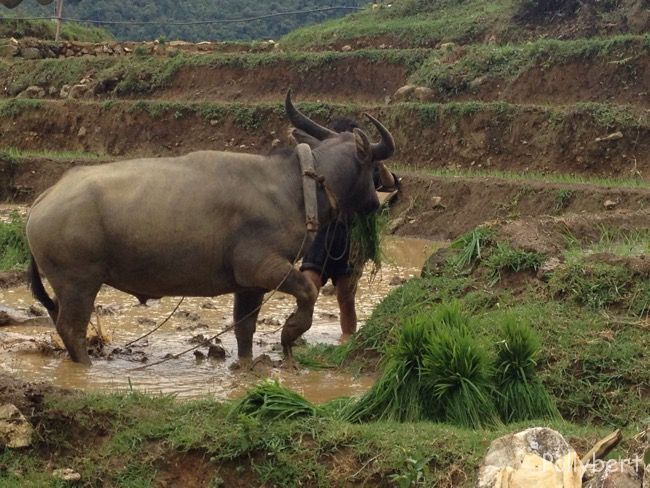 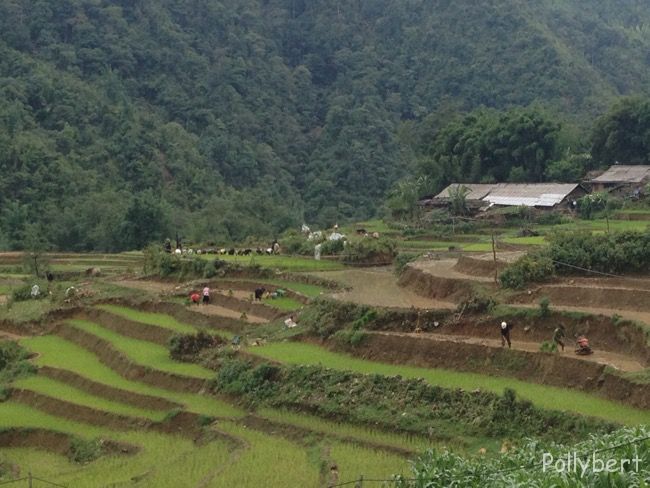 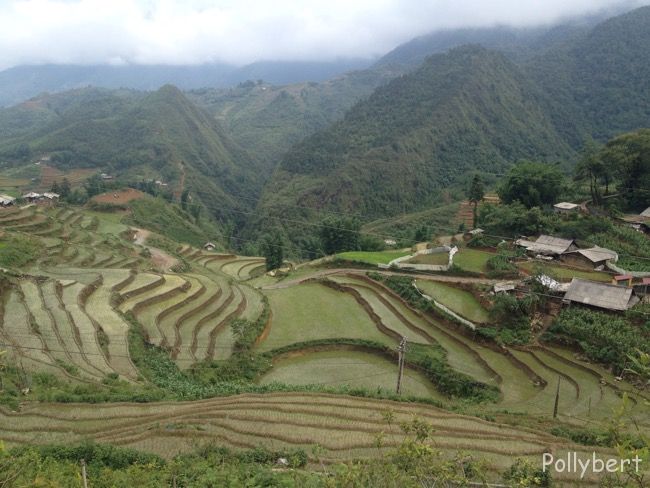 To get to the van we had to walk some more and after another 20 minutes going up we finally could rest and wait for the car.

Back in the hotel I had a shower and a power nap. Eventually I felt restored enough to visit the town. From my window I could see a church so I headed there first.

The church was right in front of the main square and from there I walked to the lake (also called in the local tourist map the lake). 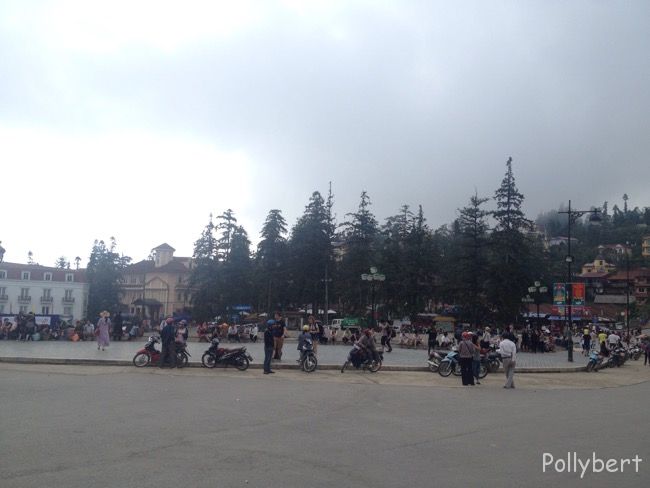 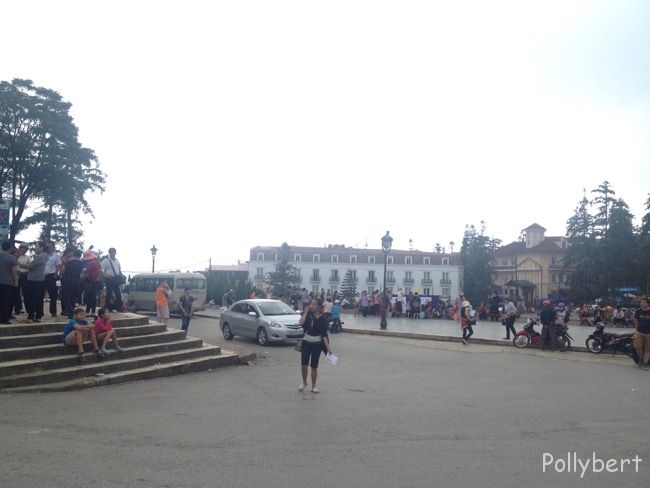 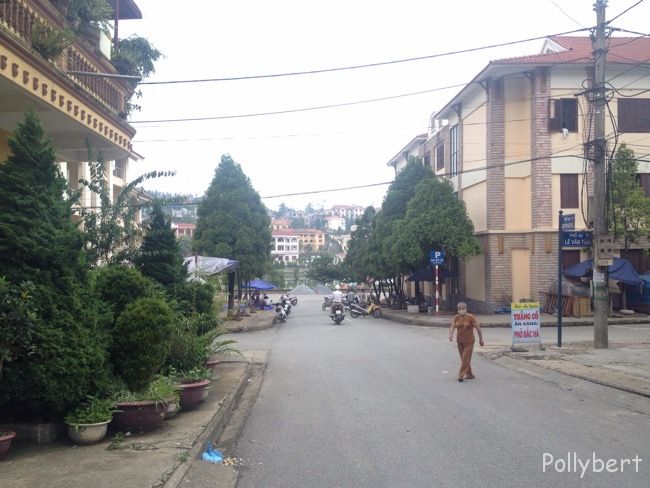 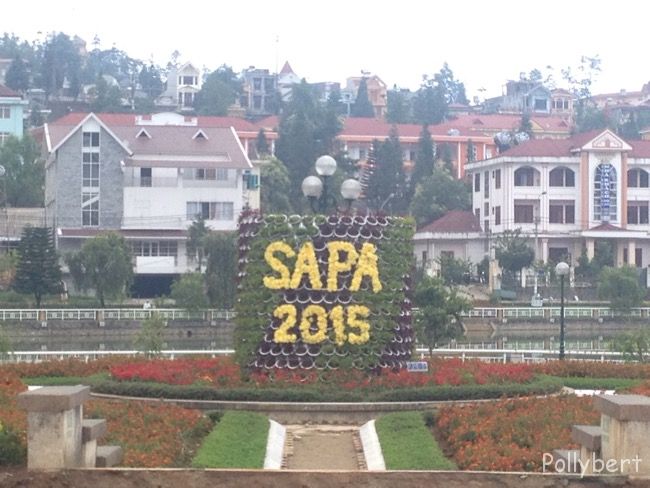 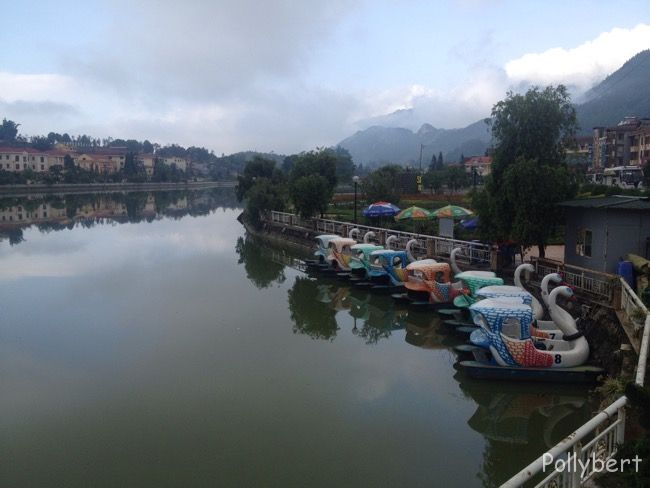 As you can see clouds moved in again and later a fog came over the town. While I was having dinner at the hotel I saw the church vanishing before my eyes. One moment there and in the next gone. Since that also happened the next night it seemed like a regular occurrence.

Dinner at the hotel was bland and not worth mentioning, but I met Nils and Randi in the restaurant and we had a nice evening. Yours, Pollybert