There was of course something in Champasak because otherwise what’s the point of going there. Champasak was the home of Vat Phu another world heritage site and supposedly older than Angkor Wat.

So this was our destination for the day. To go there we rented another scooter and Dudley drove us to the site. It was actually quite easy to go there. 10km straight ahead, over two bridges and then to the right. All very easy and straight forward, so we found it without trouble.
We paid our entrance fee and then sat down on the electric bus to get a lift up to the actual site. All very sophisticated especially since we were the only two tourists going up. Which is a bit unfair because there were other people once we were at the site (but nothing compared to Angkor Wat).
Having arrived on site we first got a bracelet full of blessings around our wrists for which we donated handsomely. Because what’s the point of money if you can’t share it with others?

So this was the start of our tour with a blessed bracelet and I was ready to be amazed again by a temple (see it’s enough to let some days go by and I was able to see another temple). Also Vat Phu was a bit different from Angkor Wat since it was built at the foot of a mountain, with another temple on top and a small spring. 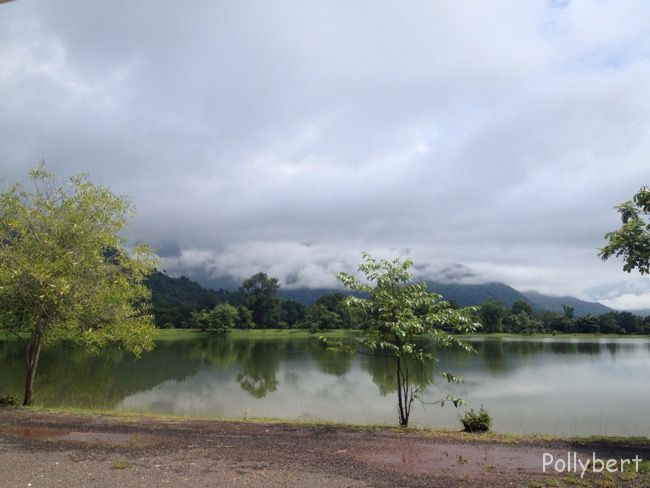 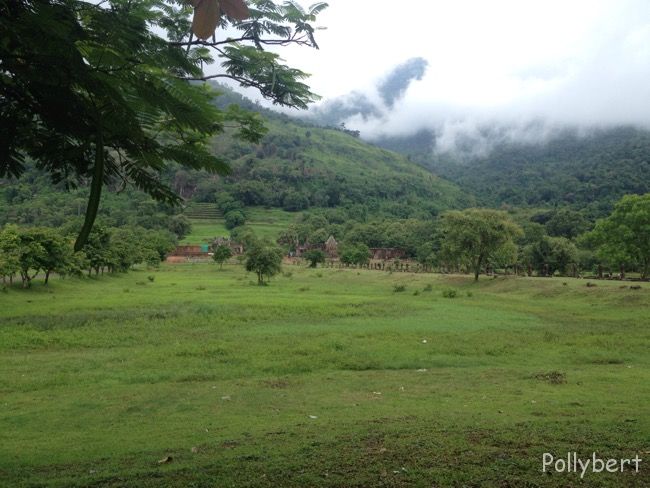 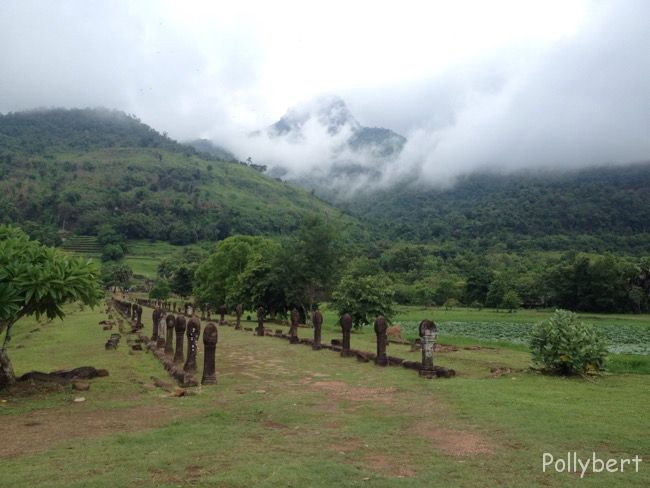 We didn’t take the obvious column lined road, no Dudley wanted us to take the paved one and leave via the boulevard.

So coming slightly from the side we could first see the two mirror temples with the one on the left side under heavy reconstruction. 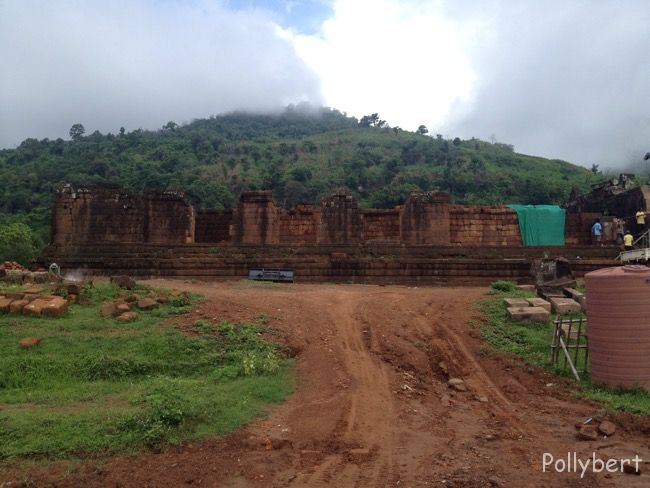 We therefore visited the one on the right side. 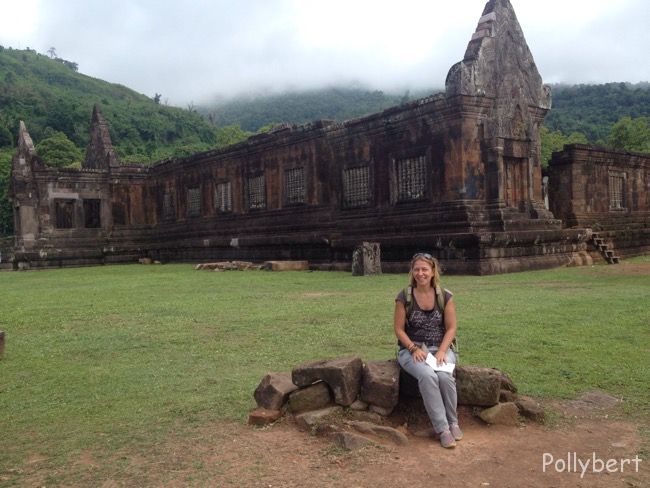 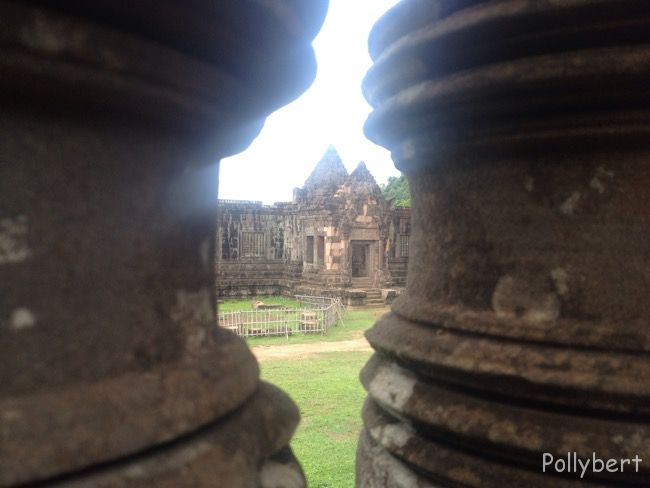 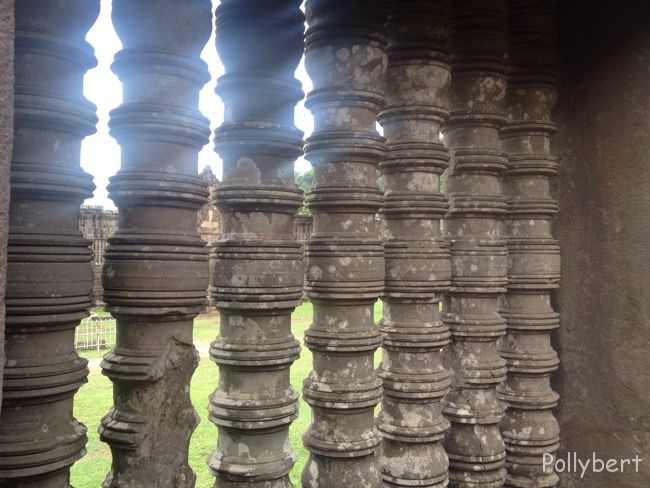 The way up was long and stony and had of course super steep steps again. But while going up the structure of Vat Phu became more and more visible. 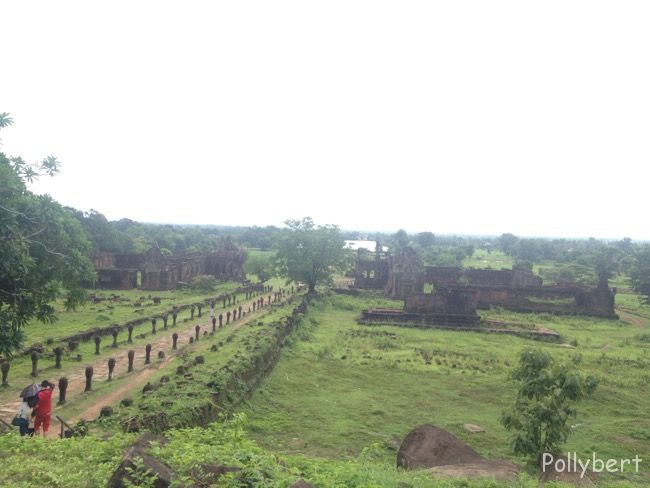 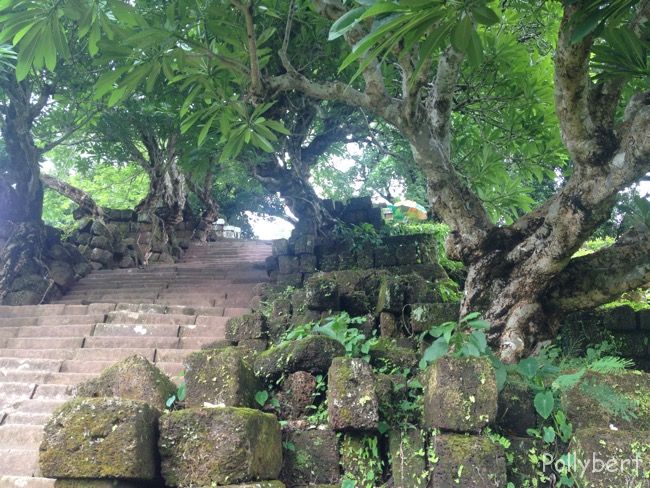 Once up we were rewarded with a view over the valley and the Vat. 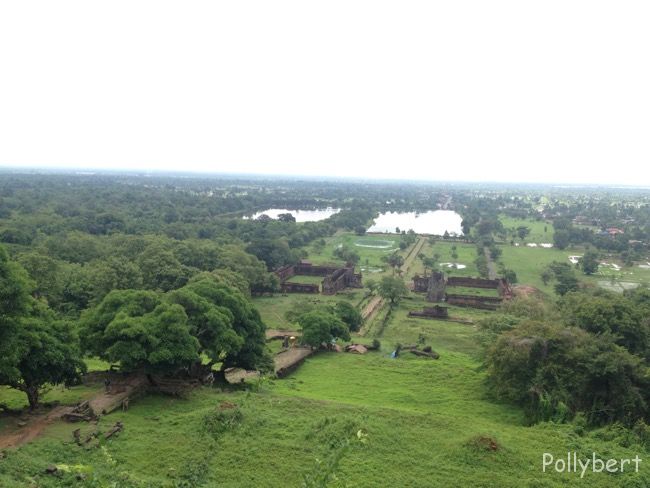 While visiting the temple on top we heard that if you pour the water from the spring on your head it brings good luck. One can never have too much of it, so of course I poured some. 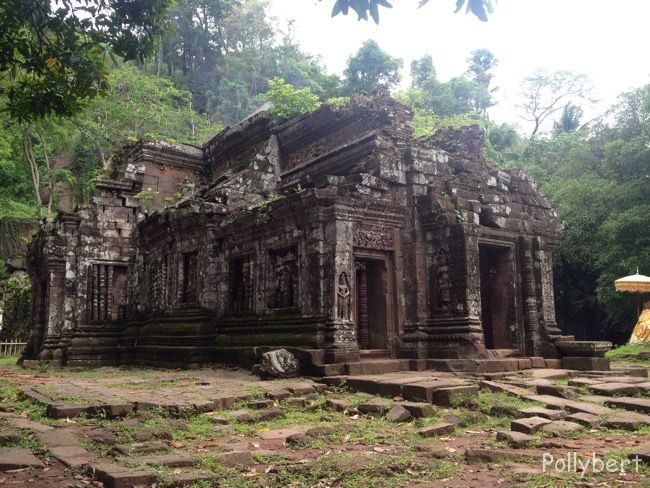 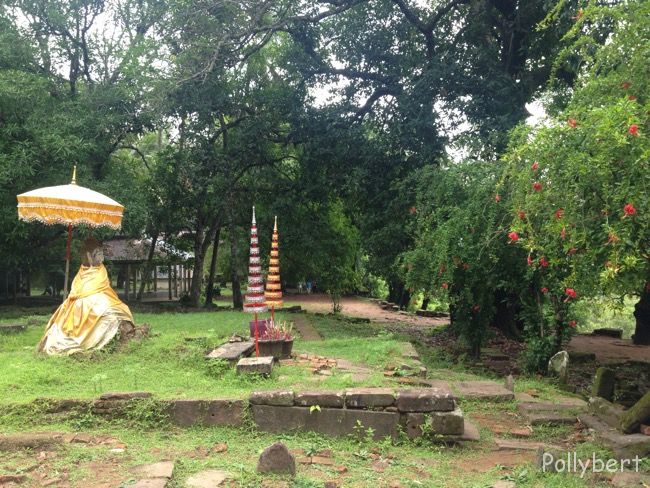 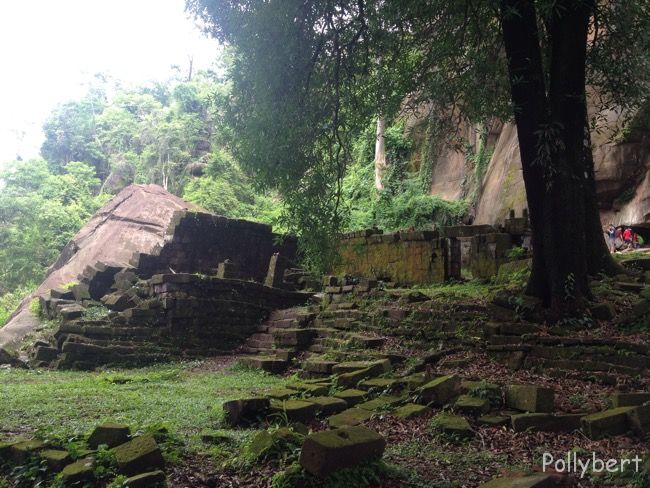 I don’t know if it helped but it definitely hasn’t hurt to get as many blessings and good luck bracelets on this trip. We went to explore the area further and came upon some rocks higher up with elephant carvings. 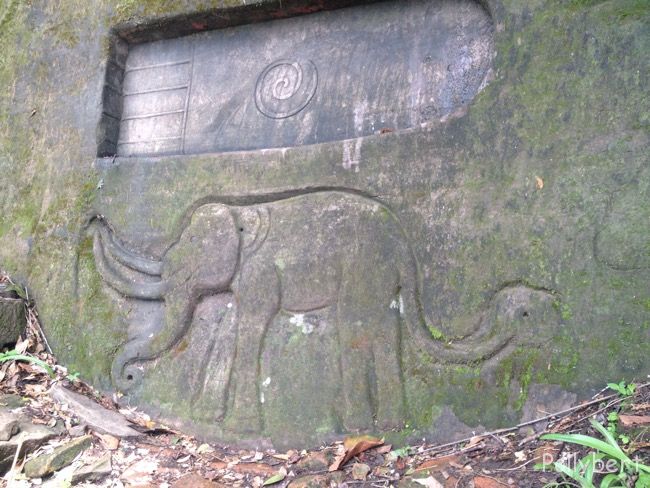 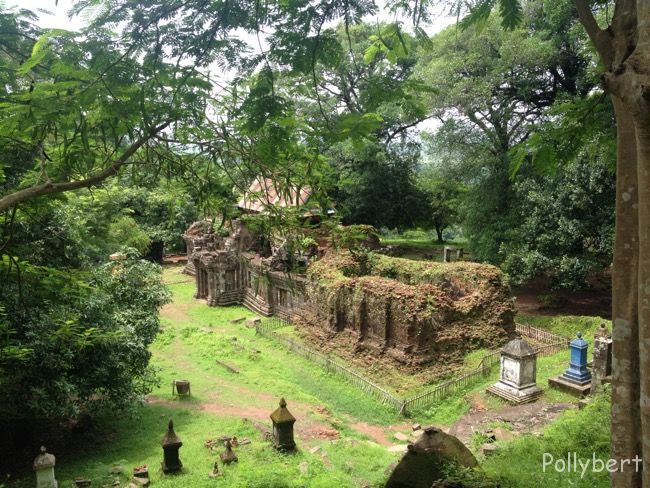 The way down was steep as up with the added challenge of actually going down. The steps were in some parts so narrow that I had to navigate them sideways.

The fallen statue of a Buddha had something tragic but walking through the boulevard lined with columns on both sides felt majestic. 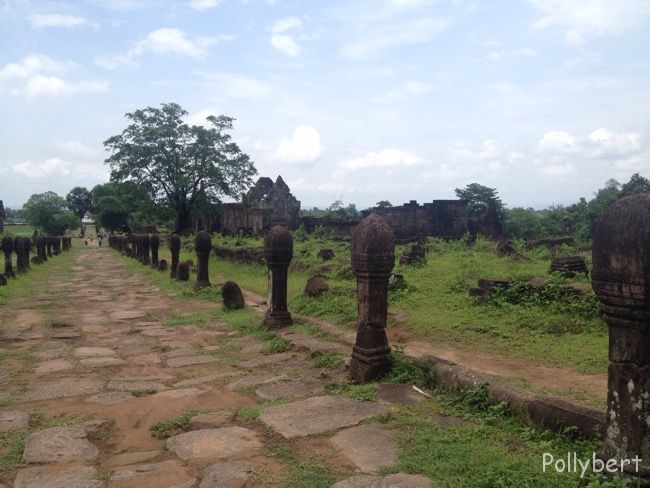 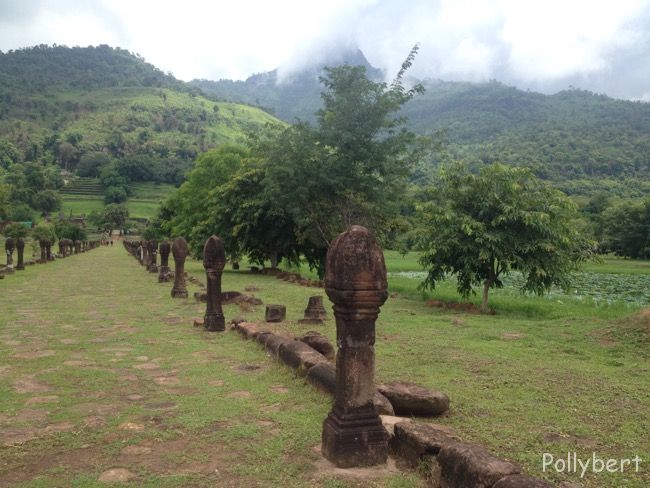 Since we were already in the area we set our sights on another temple just around the corner. The Hong Nang Sida Temple was just 2km away from Vat Phu but also in another world. The road there was no longer paved but a small dirt road with deep tracks, extremely muddy due to the rainfall last night and still half under water. Dudley managed to gut us there, I would have given up by at half way through. So this was how it looked in former times 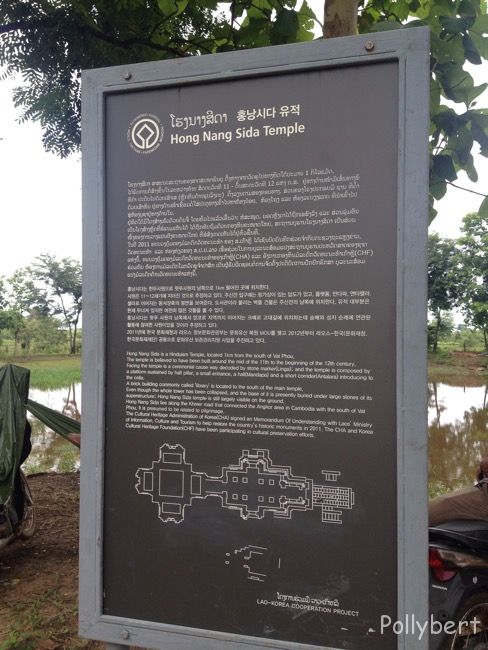 and this is what we saw. 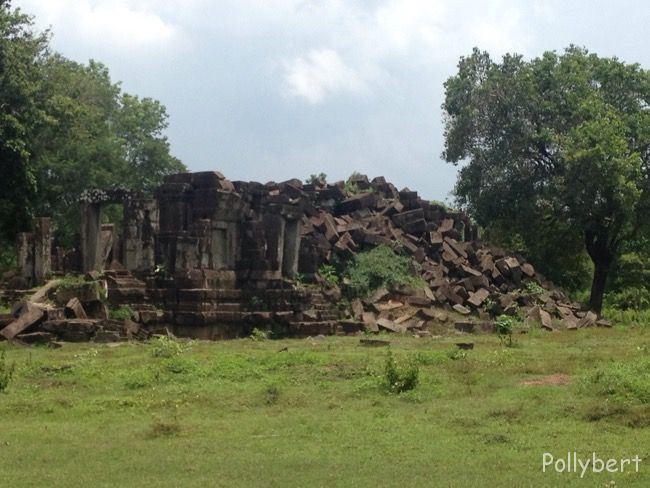 This temple has seen better times but it was still interesting to walk around. Not only we found that but also the local cows. 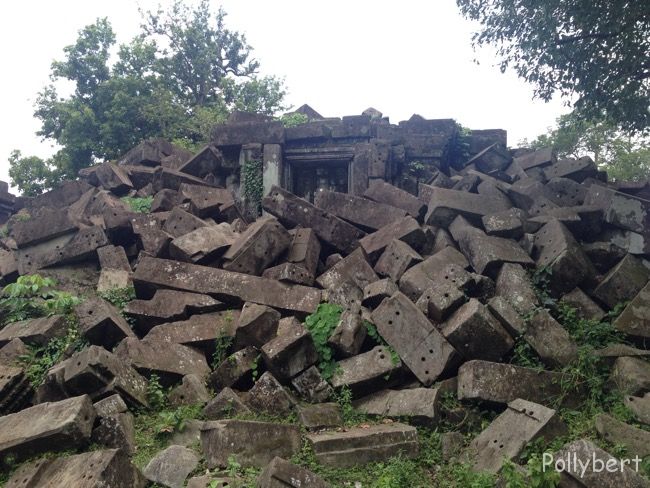 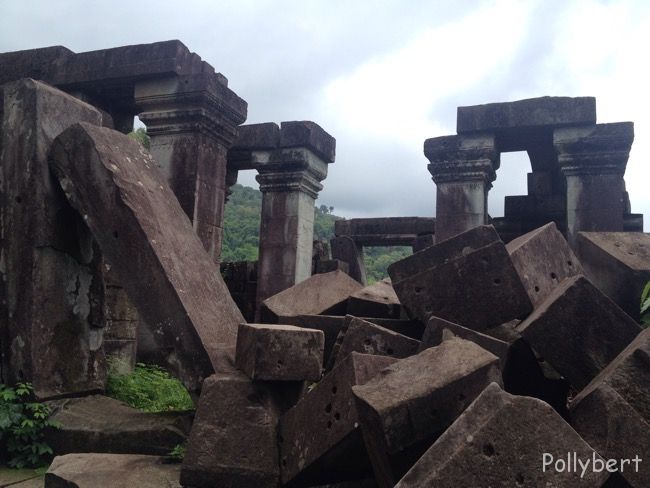 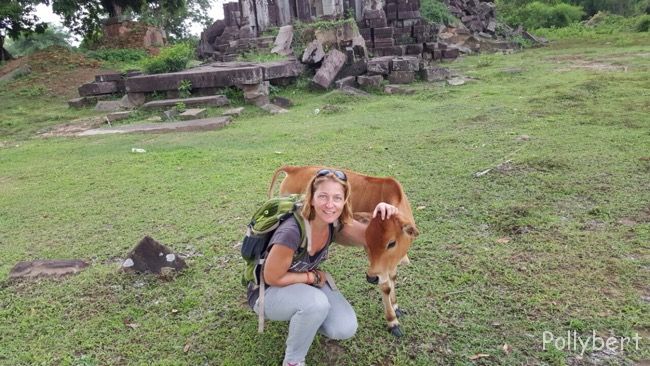 Of course the moment we walked back to the scooter it started to rain again. So we took shelter under the only construction at the site, a local house which looked lucky to be still standing. It helped with the rain though.

When we left the dirt road had changed into a mud pool and I was never more happier to drive shotgun. Dudley sneakers got dunked more than once.

Back on the paved road we had to stop for shelter a second time, the rain was coming down really hard (please see here).

But eventually we made it back into Champasak and Dudley had had it with me always sitting in the back, so he set out to get me driving. And of course I wanted to, it’s very limiting if you can only take the bicycle. Anyway, here we go. 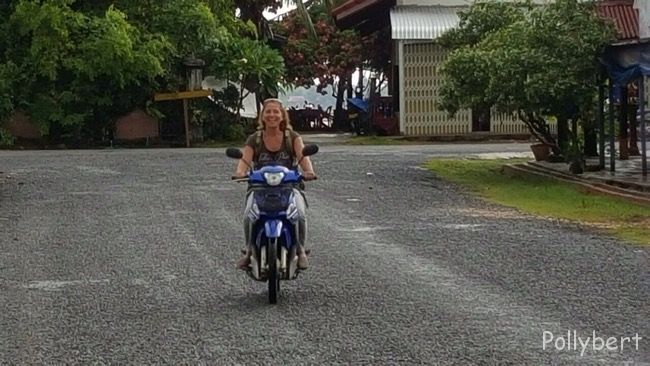 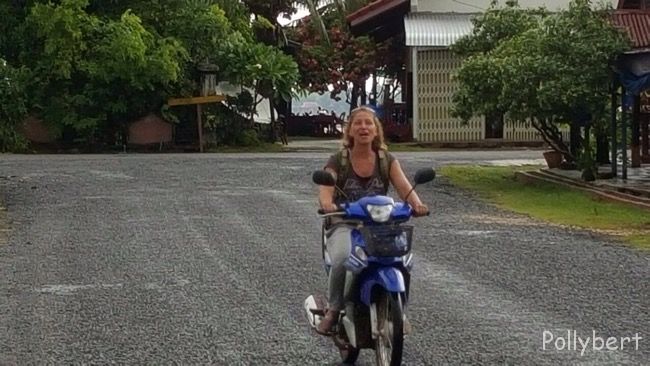 I drove a couple more rounds but definitely not enough, so I will have to do it again soon. It was a very liberating experience that I could that. Good to know that you are never to old to learn a new trick! Yours, Pollybert