More zip lining and a via ferrata

The next morning started bright and early. Maybe not so bright since it was raining again or still raining. Who could tell with the constant rain?

I got picked up by Sinsay shortly after 7am. He felt bad since the treehouse I got had not been properly prepared. He had only realized shortly before the evening ended that Dudley and I were not a couple. So he came to my treehouse first to check if everything was alright. Which it was since my bed got only a bit wet.
The waterfall in the morning was almost invisible behind the fog and mist.

After a hearty breakfast in front of it we started the day with more zip lining. It was so beautiful and exciting, the longest zip line went for about 450m and we did 13 of them that morning. 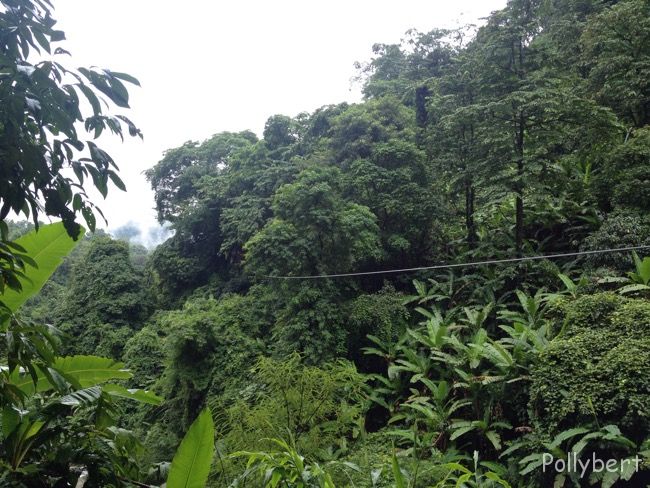 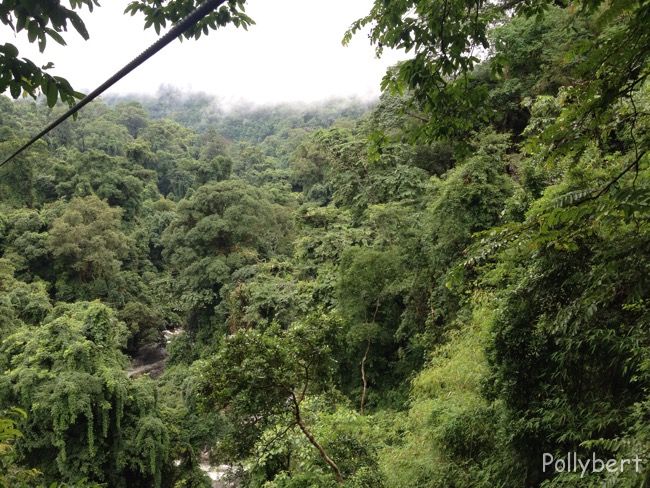 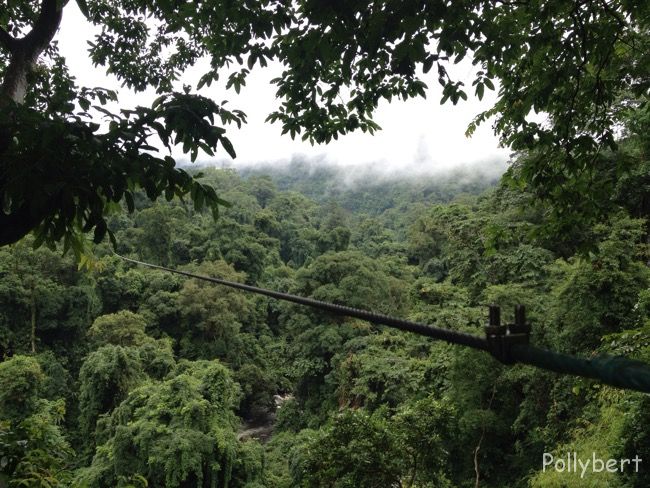 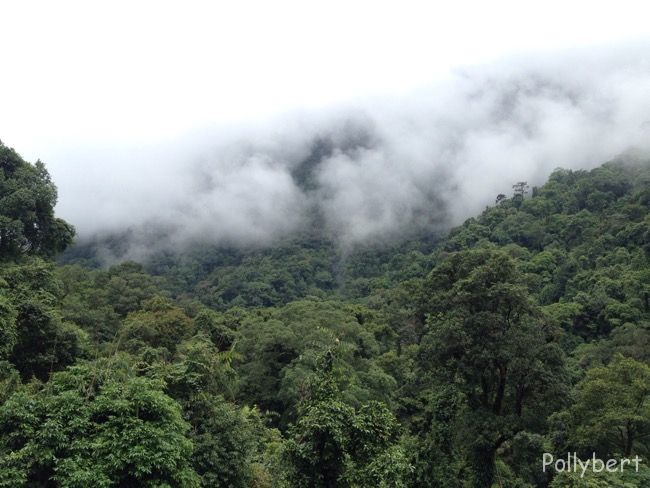 And here I am with our guide Sinsay. 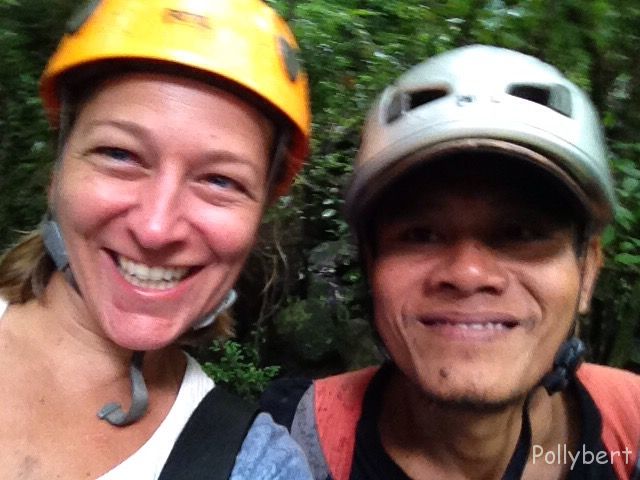 We also had to cross some interesting bridges to get back to the tree house station. I was glad that Dudley waited for me to finish crossing first before he went on. It was already shaky without an extra person on it and a challenge to get across. Suzanne was not ready to do it on her own and got a ‘lift’ from one of the guides. 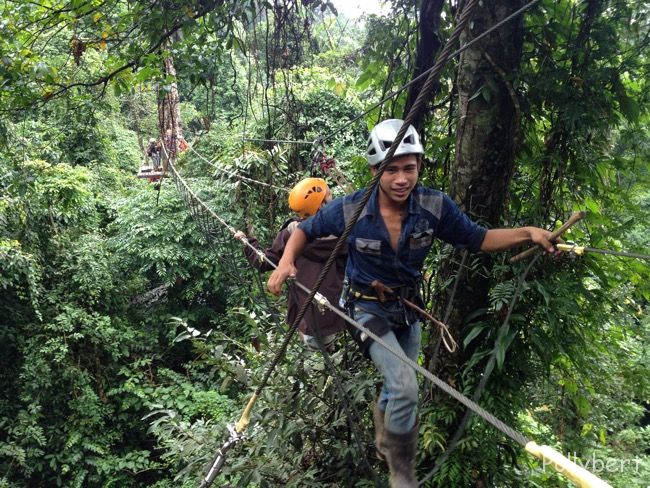 We had lunch back at the treehouse station and after that our biggest challenge waited for us. Since we had been zip lining down the day before we needed to get back up again and the only way to do that was through the via ferrata. I hadn’t really been sure what it was but after 90 minutes of trekking uphill we were standing before it. 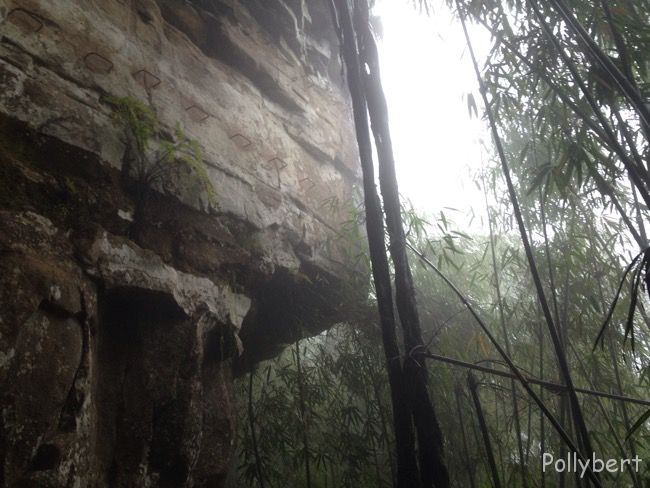 It’s probably not really visible on the pictures but we had to go up a couple of steps and then horizontal for a while around an overhanging rock and up again to a small ledge where we had a short break to wait for the others.

After the first two steps up on the wall I felt my legs shaking so hard that I had to take a deep breath and tell my brain to shut up. There was just no room for panic on this wall. It was better after that I was extremely focused. When I got around the overhanging rock I noticed that I had forgotten to change the carabiners to the new line. I had to go back around the bend and was so grateful that Sinsay was right there and helped me. When I finally pulled myself up on the ledge which was halfway through the via ferrata I was exhilarated and happy. A couple minutes later Dudley also made it to the halfway point.

Shortly after Suzanne arrived who had had a panic attack on the wall. Sinsay organized a guide in front and in the back of her and with these two guys she made it up.

After a short break we started on the second half which was a lot better since it didn’t involve any horizontal climbing. My problem was though that Suzanne with the guides were right behind me and her front guide grabbed my foot to let me know that I had to hurry. Suzanne was getting more and more hysterical and they needed me out of the way. This of course put pressure on me which I hated on the vertical climb. Eventually I made it to the top and couldn’t have been prouder of myself. I did it on my own, unbelievable!

More trekking waited on top of the wall for us and after another two hours we arrived at the point where we had started the day before. 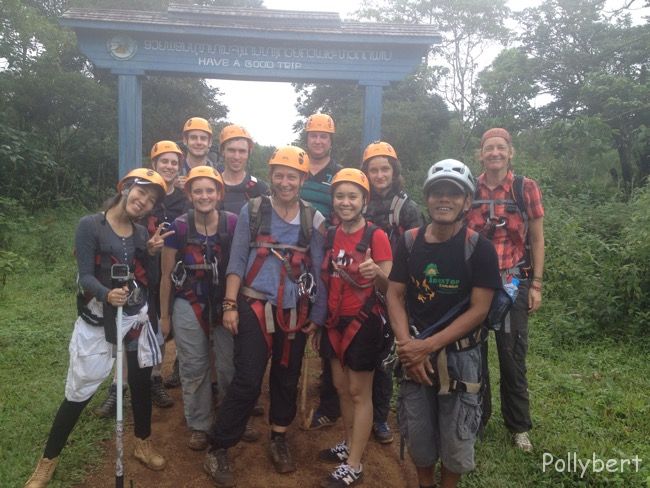 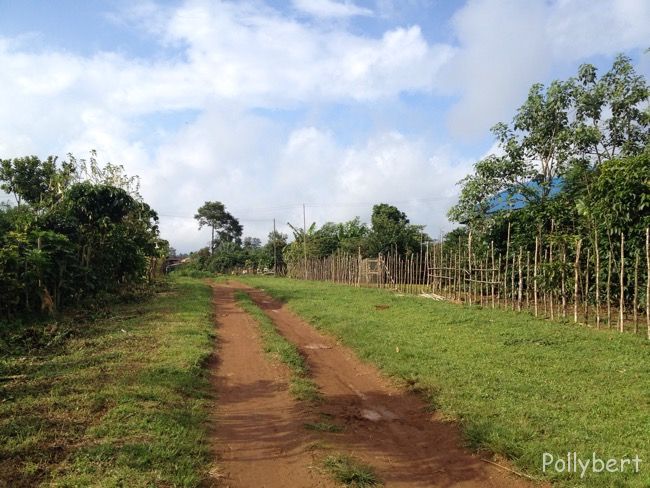 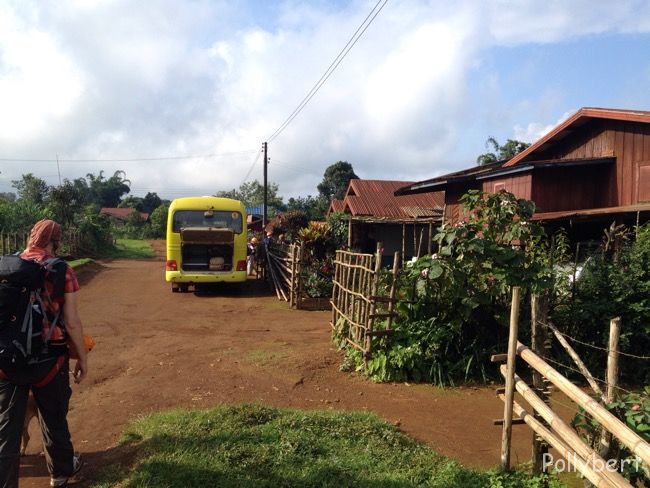 We had a short rest to take off all the gear and to just breathe evenly again. Our two-day adventure with Green Discovery Laos had come to an end. And we were all more than happy to have survived it. I had never felt more alive than at the top of this wall. Not sure though if I will ever go on a via ferrata again. Yours, Pollybert