After our more than interesting journey up north to Vang Vieng, we were glad to find our guesthouse easily. Champa Lao The Villa was an amazing placee, a little bit outside of the bustle of the village and definitely not in the middle of the backpacker party zone. When I told my brother that I was heading there I had to hear that last year 22 people died due to the rapids of the Mekong (and probably heavy inhibitions of LaoLao). But since I am not 20 anymore but a responsible adult, I didn’t foresee any problems.

After checking in we went first for lunch to get some energy and then I convinced Dudley to book a tour for the next day. 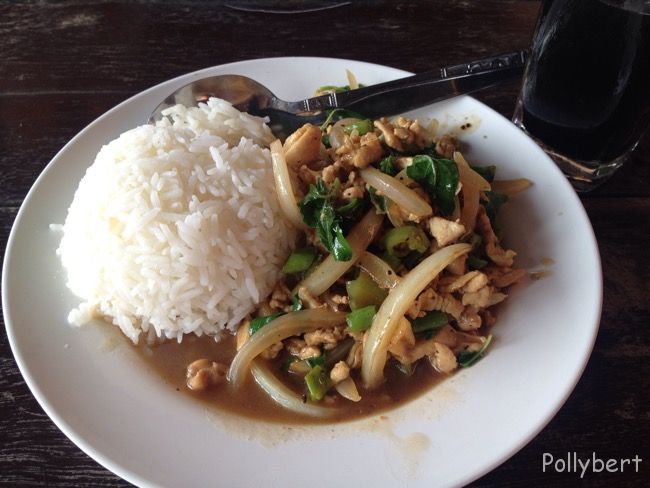 Since we had made such good experiences with Green Discovery Laos I wanted to book with them and they offered us a three caves visiting tour with kayaking in the afternoon. After finalizing our plans for the next day Dudley went back to get some rest while I sat down to write some postcards and to get a pedicure (so not worth it).

The next morning we had breakfast at the guesthouse where they served an amazing soup. 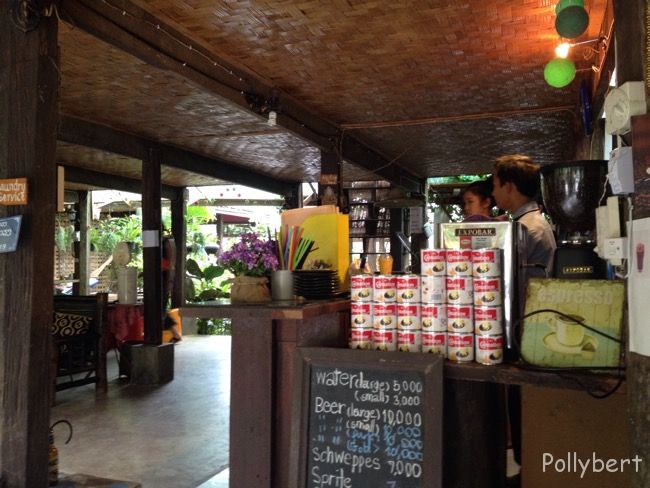 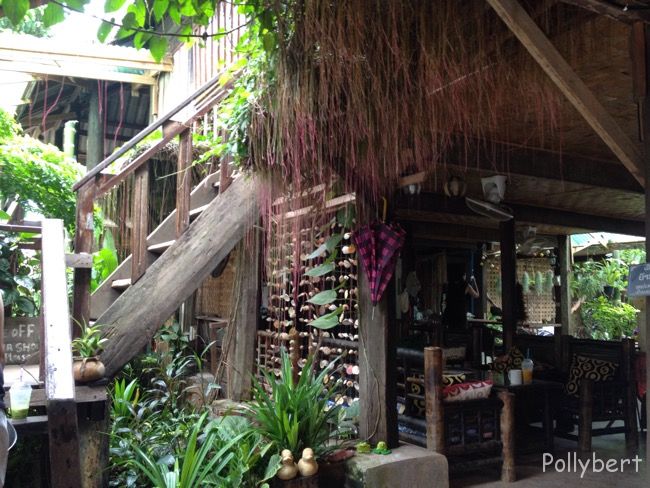 Right on time our pickup arrived with two girls from South Korea already in it. Minnie and Jinnie were way better prepared for the rainy weather than us. With rain coats and shoes which could get wet they were perfectly adjusted for the day. I of course didn’t bring neither but was at least wearing my bikini underneath. 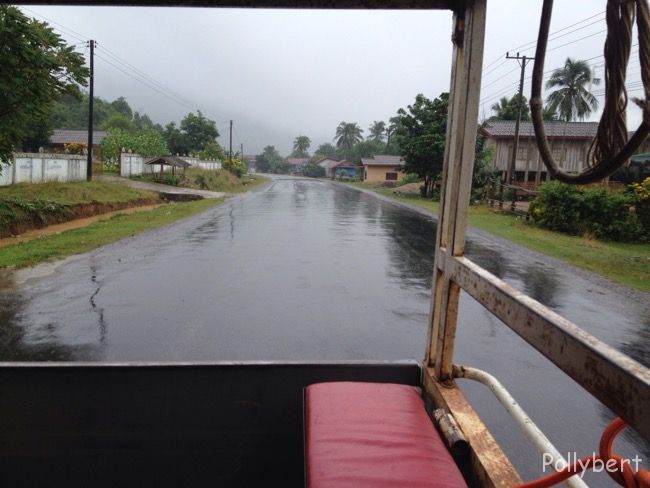 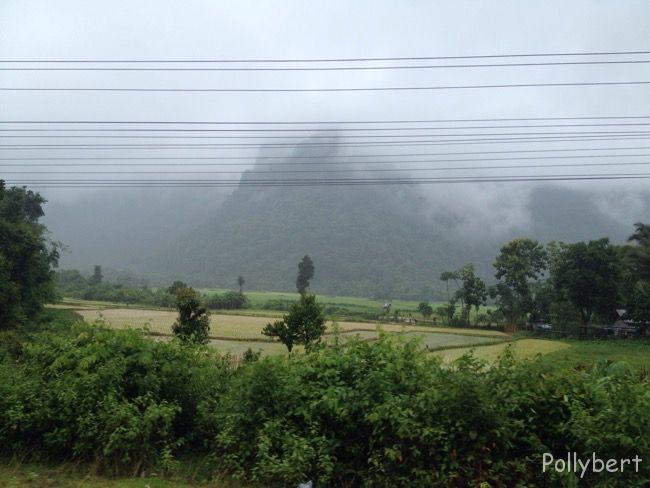 We had a 14km drive ahead and when we finally arrived near the first cave it was raining even harder. I decided to remove my T-Shirt and just walk around in my bikini top. Really no point in getting everything wet. 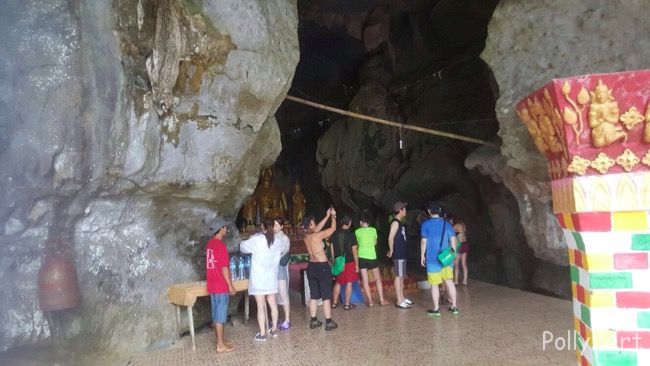 From the Elephant Cave we trekked for a while through the rain. The first couple of hundred meters I still tried to save my shoes but eventually I gave up and waded through the pools of mud. There was just no other way through. 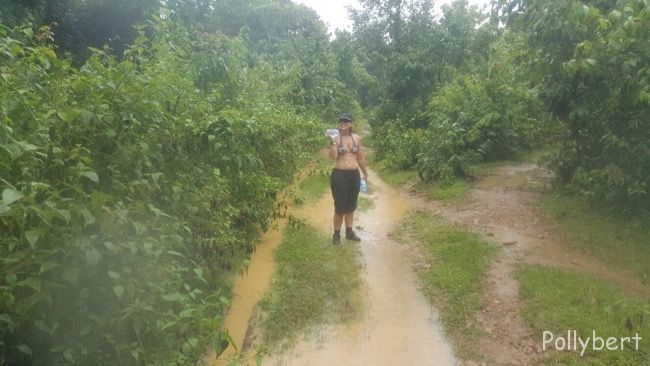 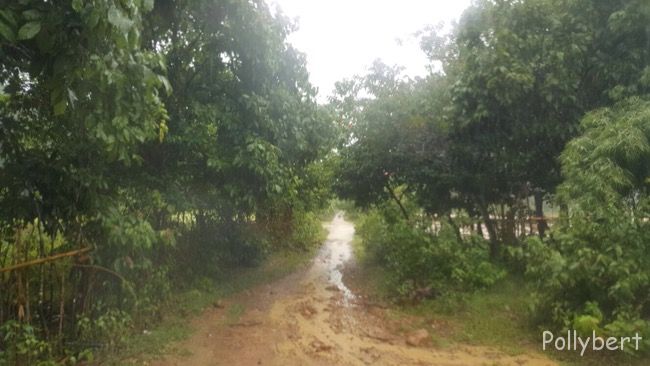 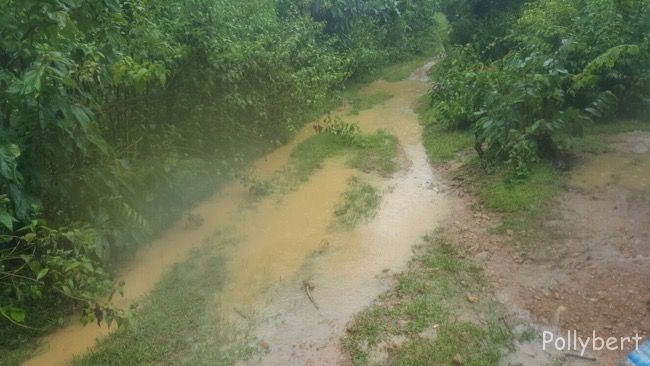 By the time we reached our lunch place I looked like a drowned rat. Since we would visit two caves before eating I put my T-Shirt on again, no need to get cold in the caves. 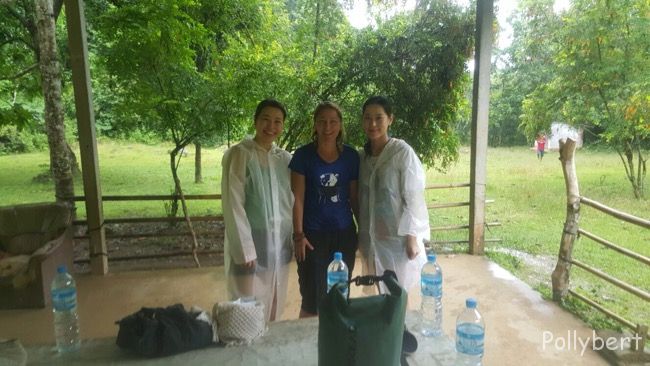 We left all our things at the table and started with the snail cave (Tham Hoi cave). After the caving experience in Vietnam the caves in Laos were of course disappointing. Nonetheless we walked through the first one for about 45 minutes and the second one maybe 10 minutes. The formations were better in the first one but still insignificant. In the second one was a large Buddha at the cave entrance though.

Once we finished with the second cave we went back to the rain shelter and had our lunch. Now this was a tasty affair, Laotian BBQ at its best. 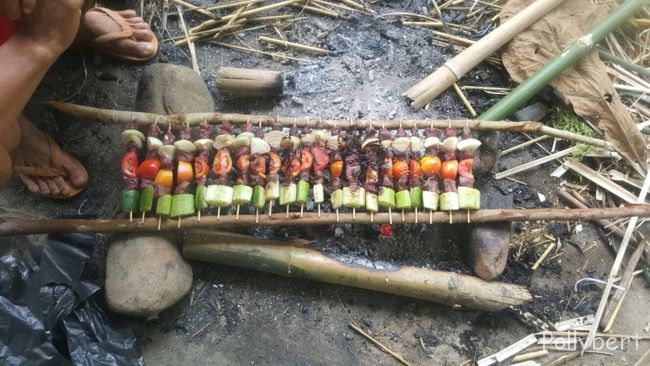 It was still drizzling when we left for next cave. After a short trek we arrived at Tham Nam (water cave) where I shed my T-shirt again because as the name implied this cave could only be accessed swimmingly or as in our case with tubes.

Thus we explored the last cave for the day. As with the others there was not much to see but it was fun tubing inside, using a rope to not get dragged along by the current. When we exited the cave the sun was out and all of a sudden it was hot again. We had another trek ahead of us to visit a Hmong village passing through some rice fields.

When we finally crossed the bridge we were all hot and sweaty and ready for the last leg of our tour. The tuk-tuk truck was waiting for us and with the canoes we made our way to the Mekong. We had a good two hours of kayaking ahead of us and we all wanted to get into the water.

Why Dudley was mostly taking pictures of me when I was not rowing, I really don’t understand.

But at least we didn’t capsize due to my unwavering support. Eventually we all made it to the last bar along the river before the village. Here we stopped for some sustenance in form of chips and beer. That “happy water” was served along the beer we didn’t know before but it had the desired effect.

We stayed a while longer and enjoyed the relaxed atmosphere with our guides and Minnie and Jinnie. What difference a little “happy water” could make, suddenly we were not strangers anymore.

After so much exercise we were really hungry that evening and Dudley managed to eat the biggest burger available in Vang Vieng. Yours, Pollybert