Around the Hoàn Kiém lake in Hanoi

I arrived in Hanoi with an hour delay at 0:30 on May 30th. My month in China was over and now a new chapter would start.

I had splurged for the hotel in Hanoi on account of a recommendation I got from a friend. The Golden Sun Suites Hotel would be my home for the next four nights. What a good idea that I had also ordered a pickup service. In no time was I in my room and ready to go to sleep except for the music at first and later cocks crowing. What a weird combination. The next morning I heard that one of the neighbors raises chickens on his roof.

Eventually I must have fallen asleep because at 9am I was up again and went down for breakfast. Reading through the guide book on what I had to see this day I went to the reception desk to ask for a map and was stopped by Eric the manager/travel agent of the hotel. In no time had I booked a trip to Halong Bay and Sapa. The moment I gave over my credit card I was not sure anymore if it was a smart deal. But too late.

Provided with a map from the hotel I made my way to the Hoàn Kiém Lake which was just around the corner of the hotel. 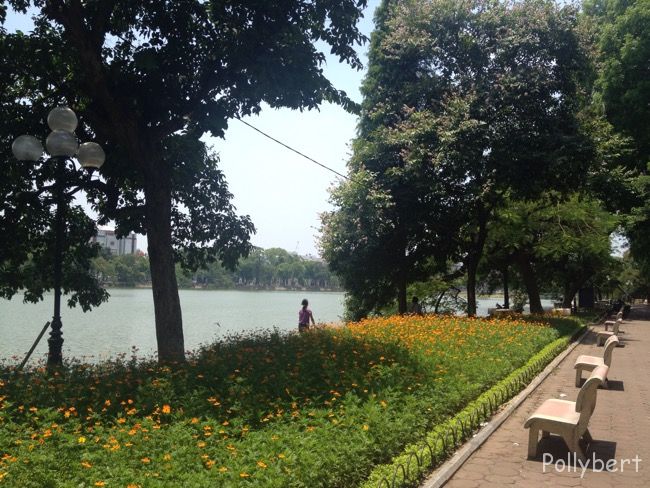 When I saw on the map that there was also a St. Joseph’s Cathedral (I think in Montreal it was the St. Joseph Oratorium or so) I made a little detour and walked there. The church closed during lunch hours and I made it in just before.

The church offered a welcome reprieve from the sweltering heat and humidity. It must have had around 40 degrees. But the reprieve was short lived since we were ushered out not 5 minutes after my entering.

From the church then I walked to the Hoàn Lò Prison which was started by the French.

The prison detailed the gruesome treatment of the Vietnamese by the French but also showed the almost summer camp like living conditions for the American prisoners. I took no pictures since it was very dark inside and the information came more from videos and information spread sheets. As usual I so much more preferred the book section of the museum and I wrote down a couple of titles to read up on this chapter of history. 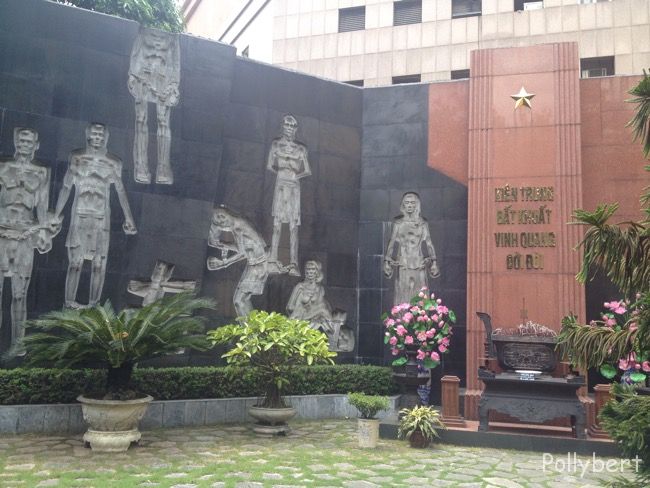 From here I walked back to the lake and set down in a shaded cafe (with fans outside) for water and a plain yoghurt on ice with a shot of coffee on top. Delicious in the stifling heat.

Still keeping to the lake I walked around it until I came to the Ngoc Son Temple. 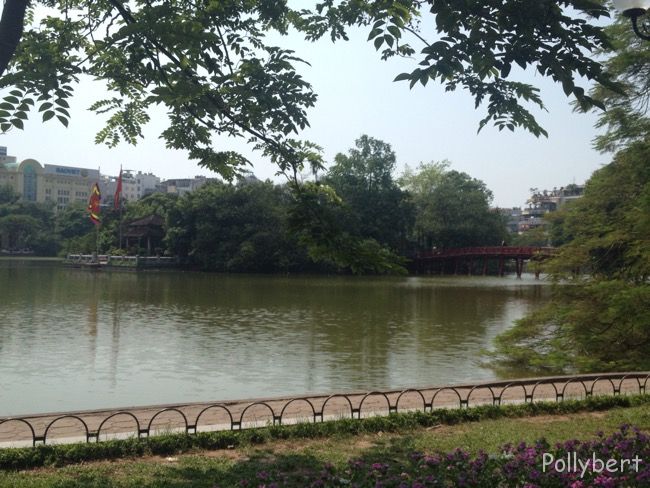 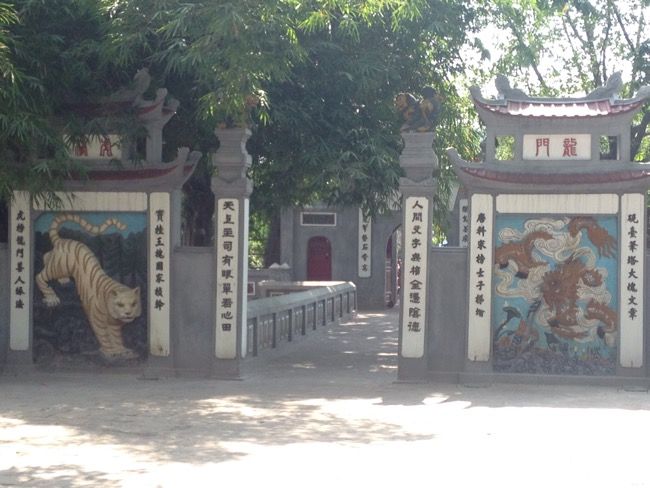 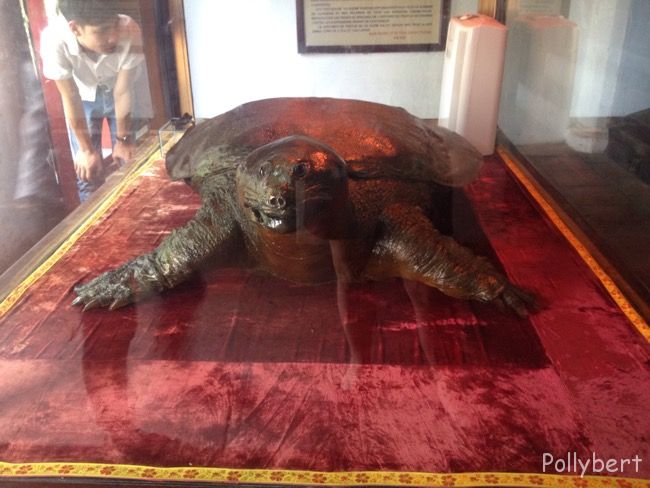 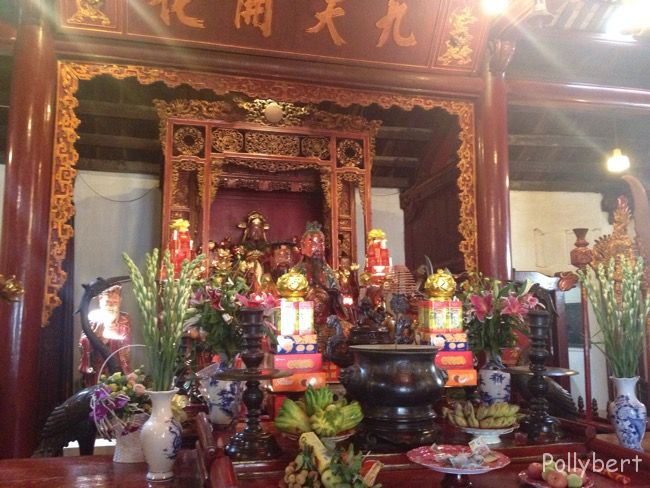 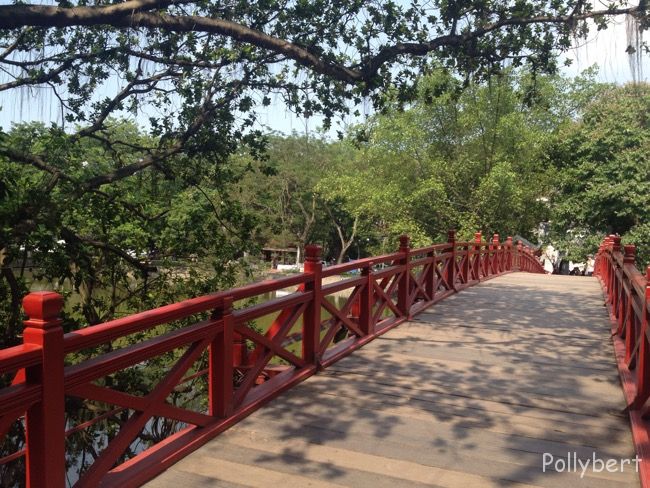 Here I walked slowly through the small temple area and savored the view on the lake. It looked cool and refreshing which was probably only an illusion though. 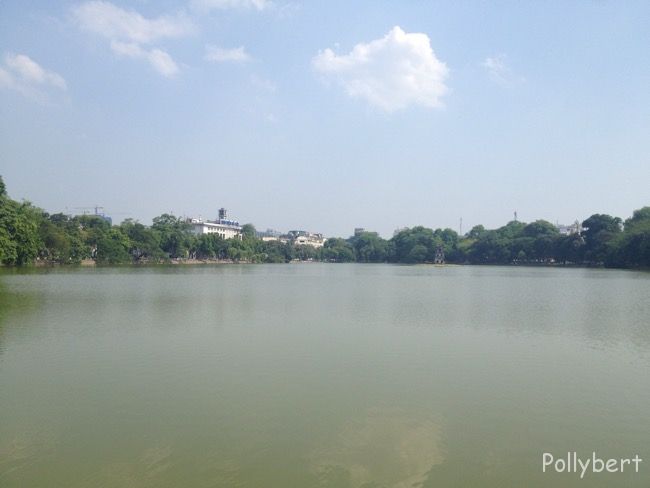 I decided against lunch. There was really no point in eating anything in this heat and walked instead further into the old district. One more temple was on my list and in the vicinity, the Bach Ma Temple and then I was proud to say I had seen all the sights in the area. Best to get that done right away. 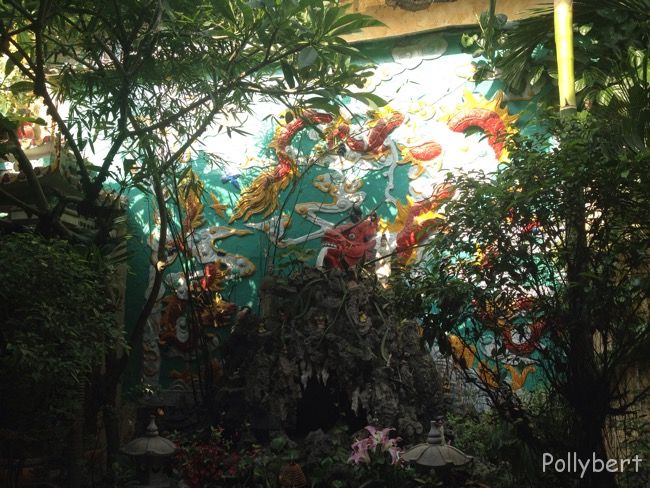 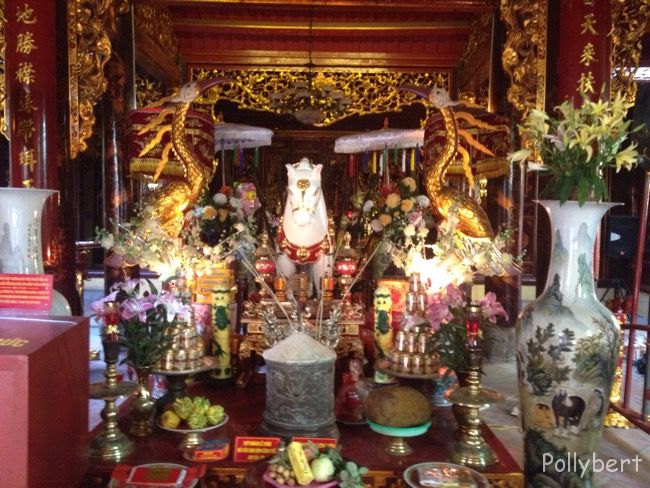 By then I was exhausted, soaked through with sweat and ready to call it a day. So I walked back to the hotel but once inside I got immediately refreshed by the cool air. Thus revived I signed up for the food tour the same evening. I had to eat something anyway, so why not try lots of new stuff?

We met at 6pm in the lobby and after a shower I felt like a new person. Which was short lived because once I left the hotel I was drenched in sweat again almost instantly (I later heard that temperatures hadn’t been that high since 45 years).

We started at a restaurant with AC (what a bliss) trying first a banana flower salad which was decorated with banana flower leaves.

Then some spring rolls and then we had to roll our own spring rolls with fish. The fish was roasted over fresh dill. 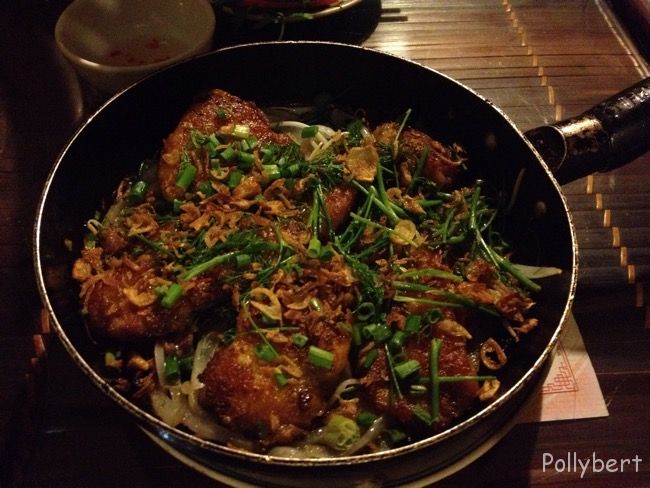 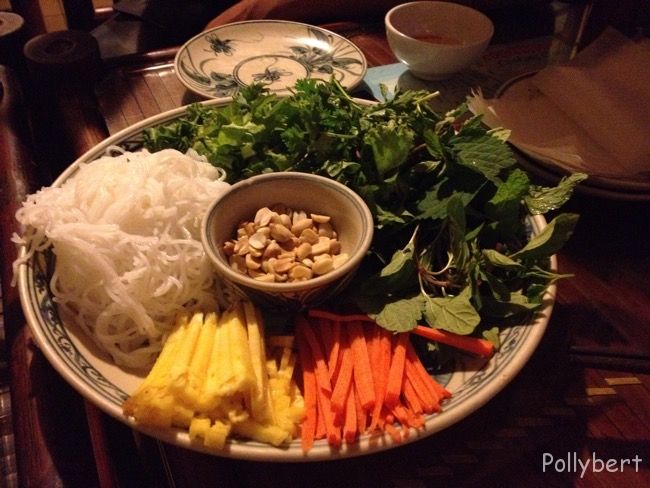 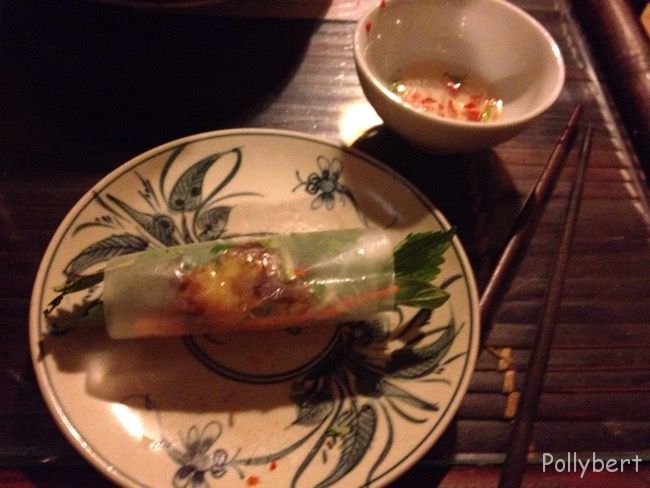 Next stop was a sugar cane juice stall.

Next we tried a Bánh Mì, a Vietnamese baguette filled with a freshly made omelet, cucumber and some other stuff.

After that we tried something fried on the street (sorry no picture and I can’t remember what it was, so not remarkable), were shown the best Pho place in Hanoi (and there was a huge line up of local people), passed the church that I had seen this morning and had some lemon green tea right next to it. 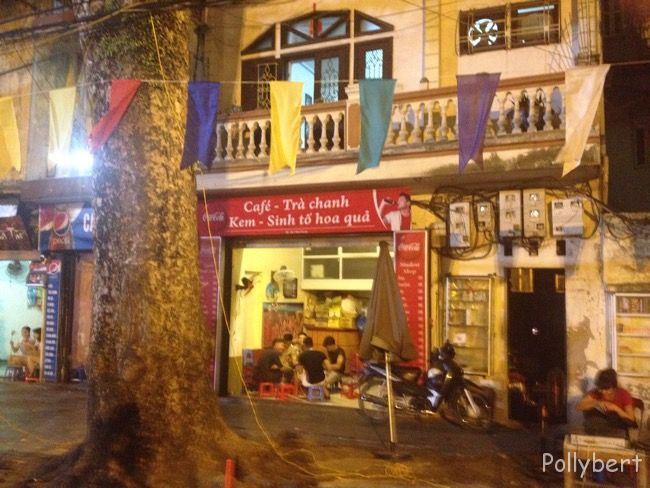 From there we moved on to the next place where we saw how to make the rice paper. We tried it fresh when it is very soft, stuffed with ground pork and mushrooms. And to wash it down we had cold green tea (tasted bitter).

We were still not finished, after the rice paper crepes we ate green tea ice cream. It was so hot that I had to take bites instead of licking it otherwise it would just have melted away.

Then we crossed the main square in the old district which was really a crazy thing to do since the motor bikes and the cars never stop. They just drive around you. You have to step down from the sidewalk and just begin crossing the street. If you wait for a pause in the traffic this will never happen.  After a day you get used to it and just do like the locals. 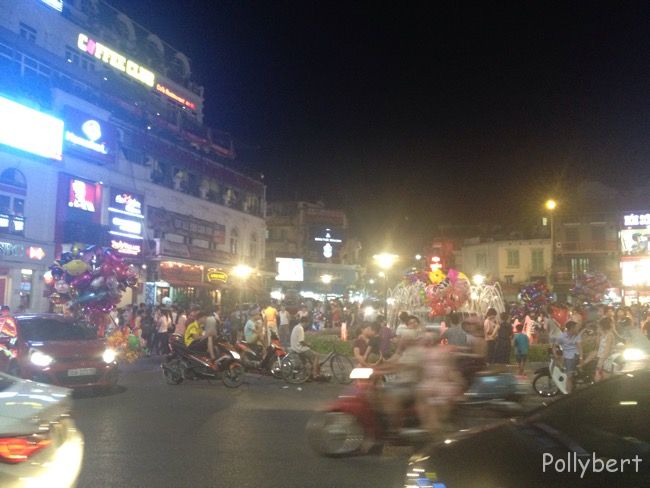 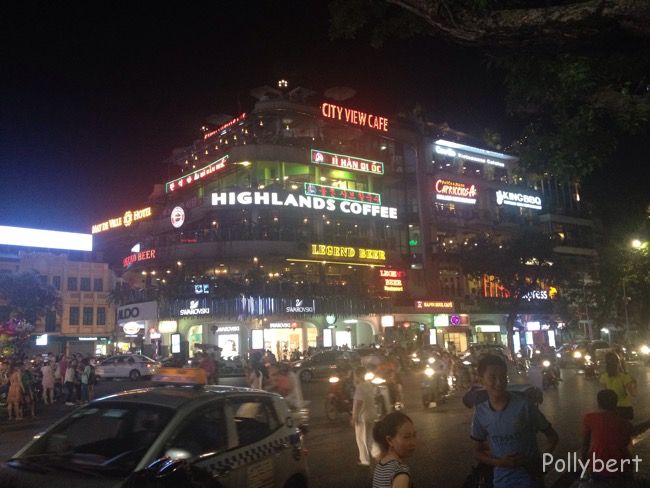 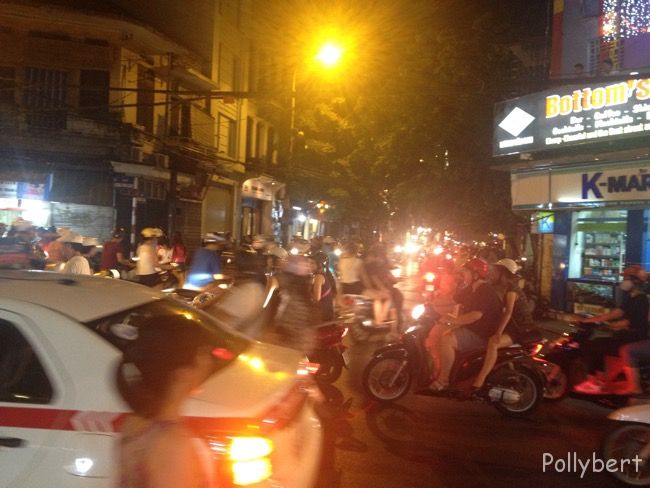 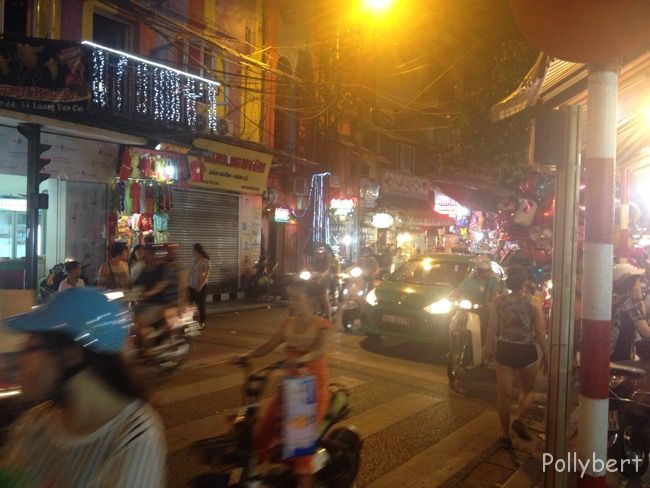 Far from ending the tour we now tried a fruit salad on ice with tapioca and coconut milk. There was also avocado in the salad. Loved it!

Passing a fruit vendor on the way

we moved on to our last stop to try Cafe Trung, coffee topped with an egg yolk mixture. Really tasty but also too sweet for me.

And this is how a happy me looks after an evening full of palate pleasers. Yours, Pollybert