So here I was in this quiet beach town with no tourists (I saw 10 all in all). This was going to be my relaxation after all my traveling. You can’t really say it out loud, but traveling is not relaxing. There is always something to do or see, to arrange a transfer or a hotel. Basically you never sit still and don’t do anything. So these four days were for me, to give myself a break.
Which meant sleeping in the first day. Which was a good plan but didn’t work. As usual I woke around 6am (why isn’t that happening at home?), updated the blog, watched an episode of GoT and just took my time.

In search of coffee I left the Hai Huong Hotel with the bicycle and made my way to the beach. And this was my first impression of the beach. 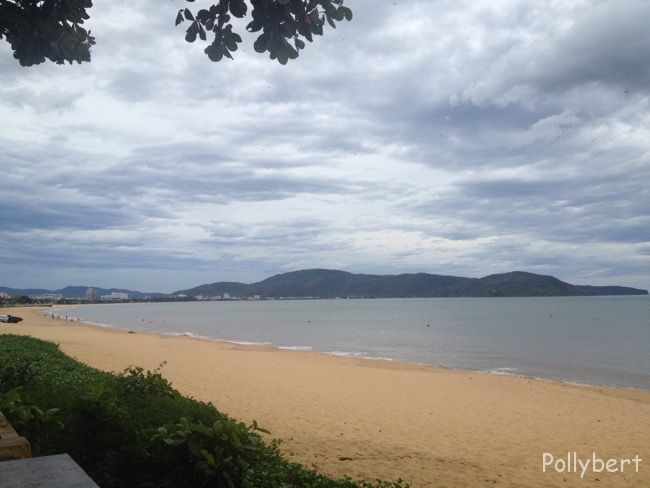 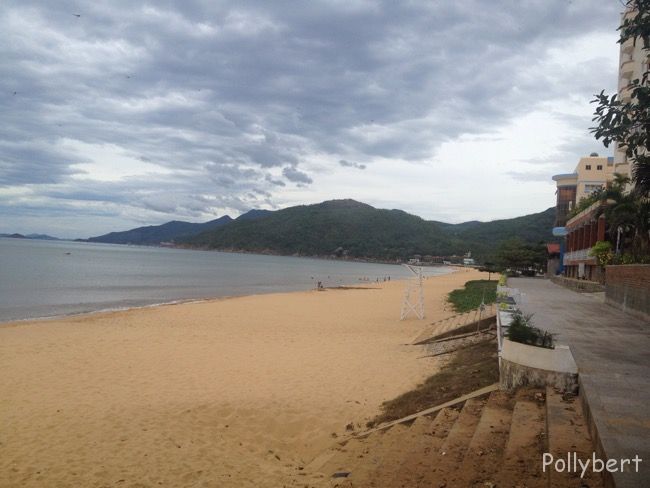 Really quiet, really no tourists but also no sun bed and umbrella. I stopped at a beach place (5 tables, plastic chairs and a guy with one of these ‘hot dog’ carts) and had an ice coffee. Looking at the beach I noticed that my beach vacation was going to be different than I imagined.

Since it started to drizzle I hopped on the bicycle to explore the city. Away from the beach I found a small coffee place that also had bathroom facilities (haha, sounds a lot grander than it was but long gone were the days in China with bathrooms everywhere).

When I left I was hungry and searched for something to eat. The first place that looked inviting was this little street place with excellent rolls! 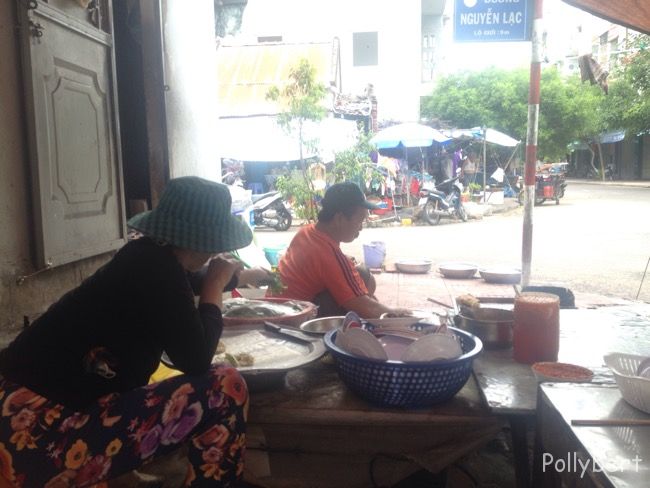 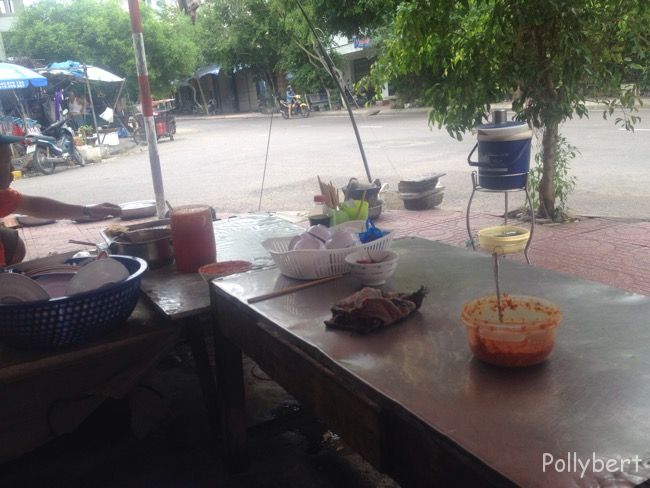 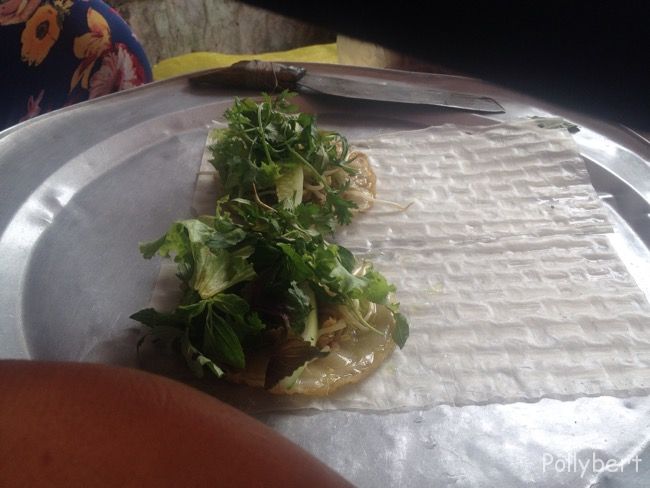 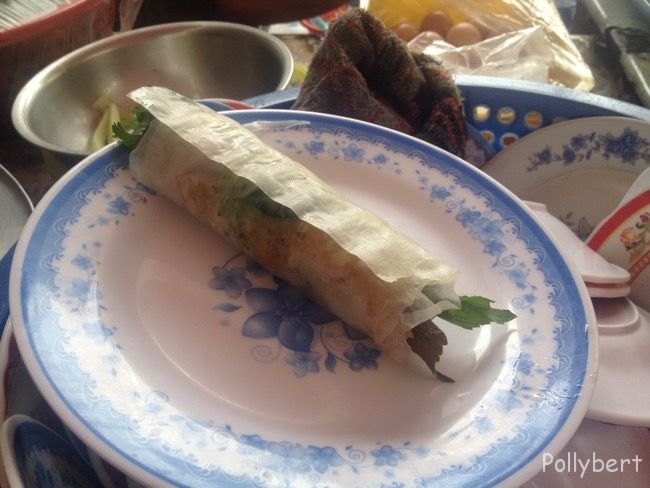 They were just fantastic! Warm crunchy pancakes with bean sprouts on top, rolled in rice paper with lots of herbs and salad, served with a peanut/fish sauce. Just delicious!

Since the rain had stopped but it was still overcast I drove to the beach again and  decided on a sugar cane juice. I parked my bicycle and noticed that the only other guest of the place waved me over. I sat down at the table next to him and our communication consisted of me saying ‘Xin chao’ and him saying lots of stuff I didn’t understand. Quite funny really. I ended up giving him my phone to take a picture which he did (that’s my bicycle in the back). But then he indicated that he wanted me to take one of him. So I did.

When I left a bit later because the sun had finally come out he ‘told’ me that he had paid for my juice. Really lovely!

So off I cycled to a place on the beach where I could see other people. Still no tourists but at least the local youth was out. As I realized later, no one was on the beach during the day but the locals came out around 4-4:30pm. So there were people on the beach, I just needed to wait.

There were actually more a bit later but most were wearing swim vests and some went into the water fully dressed. So I being on the beach in my bikini was a bit of a curiosity.

Kids were coming up to me, trying to bury me in the sand or offering me chocolate. Three students came to practice English and one even had his homework with him which I had to correct. Everyone was so friendly and the students told me were to go for dinner, showed me the massage places on the  map so that I didn’t mind the interruption of my reading.

Once the sun went down I said goodbye and went in search of my dinner. Which I found at the other end of the beach (see, lots of people in this town). 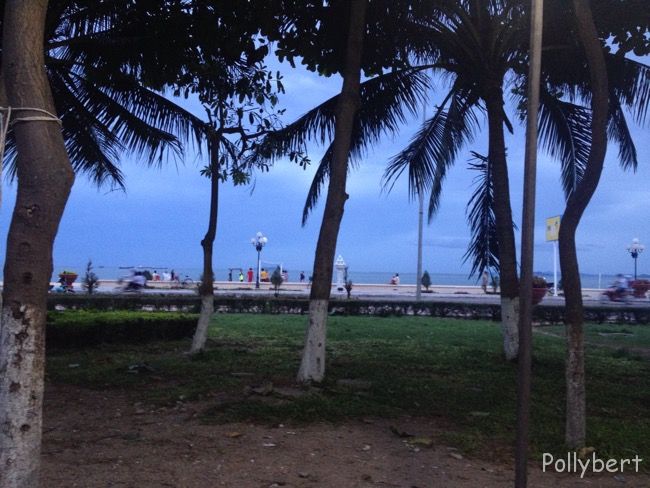 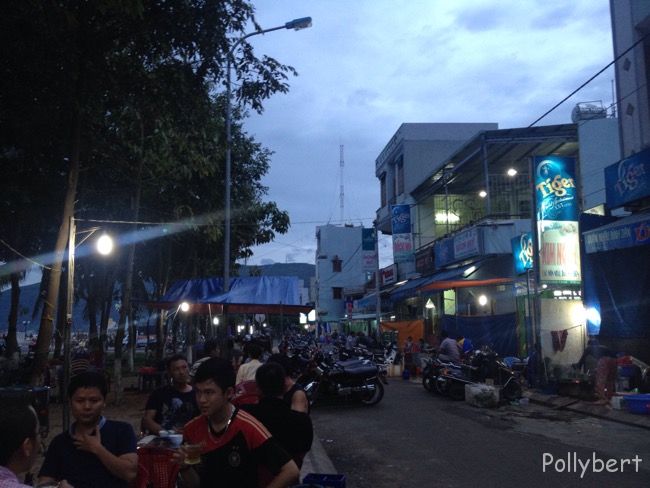 Right at the sea I figured fish would be a good choice and it was. I had one (no clue which) with salad. I really liked the way it was served, just cut in the middle which made it perfectly grilled on both sides. 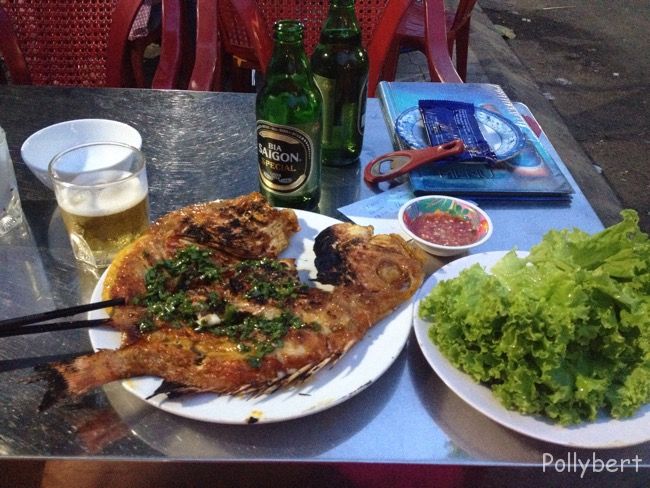 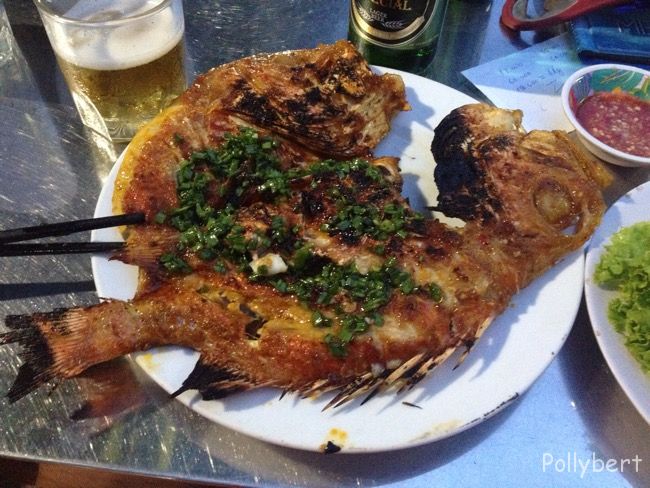 The next morning was overcast again so I decided instead of driving to the beach for coffee I would go and look at the grave of Han Mac Tu, a famous Vietnamese poet. On the map it was one of the sights to see and near my place. Off I went and got lost as usual. When I arrived at the indicated crossing where it should be there where two streets to take. One up and one straight. I took the high road, even asked someone if I was going to the right place, but they probably didn’t understand me and just said yes. After pushing my bike for more than 20 minutes I gave up. I took one picture of the town from above and decided this grave was not worth so much trouble. 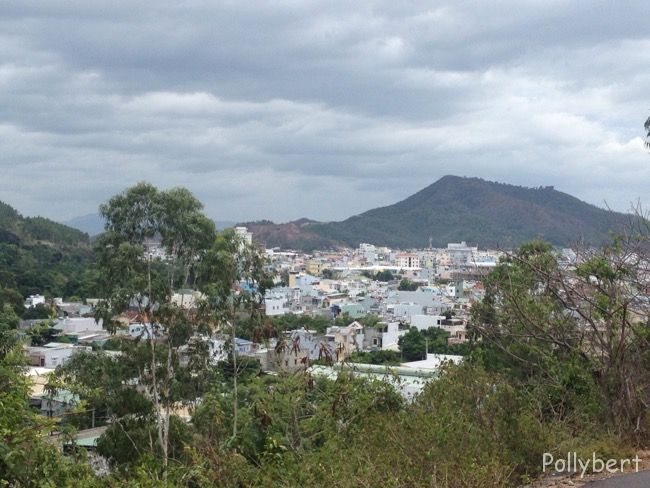 When I was at the crossing again I tried the straight road (don’t want to give up after all) which didn’t lead anywhere and in the end I sat down at the café at the crossing and had an ice coffee. 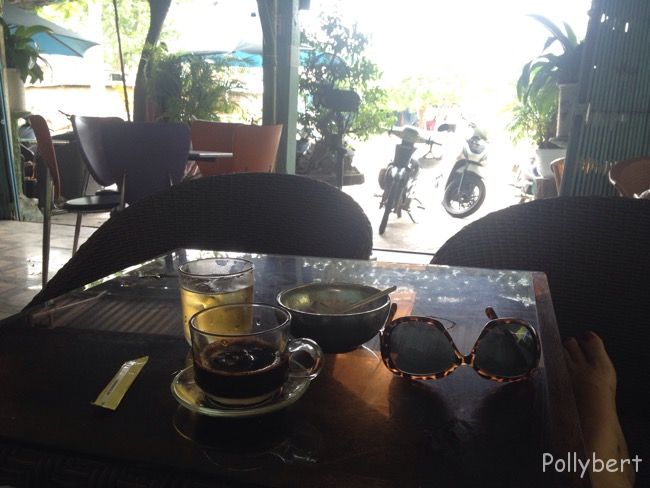 After a second one (weather was still not great) I was hungry and drove 100m further to a street vendor. Since I didn’t know what to order I said everything. What came was rice with a piece of an onset, a piece if fried pork and a piece of fried chicken. 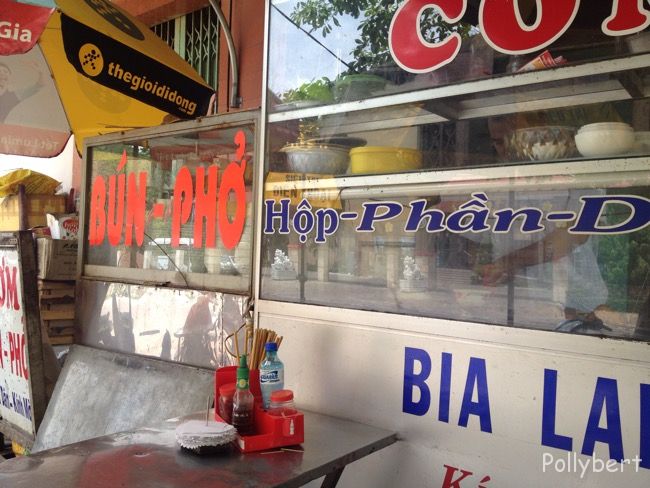 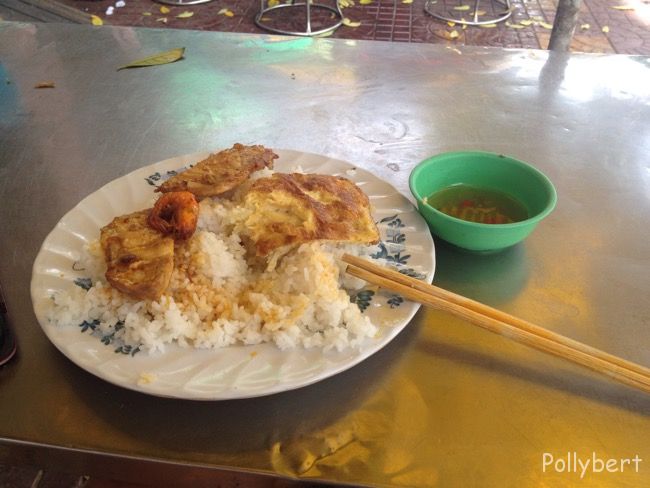 By then it was still grey but in a lighter form. There was hope that the sun might come out after all. So I decided to go to the Seagull Hotel and ask for one of their sun beds. It was a really interesting discussion, I offering to pay for the bed, the employee telling me the beds were only for guests. In the end we settled on my using it for free so long as nobody else wanted it. 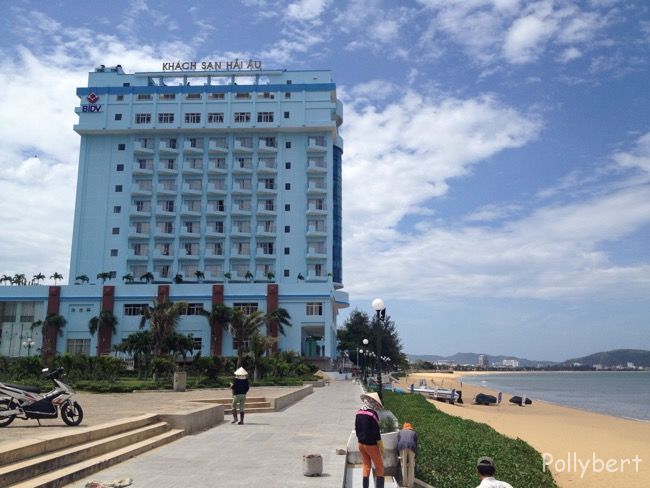 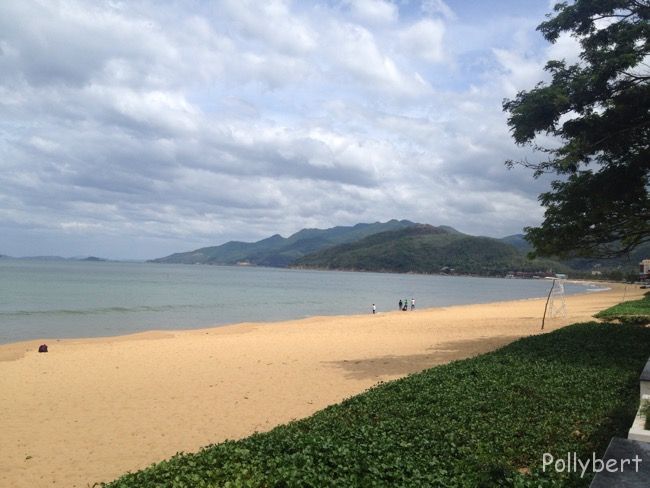 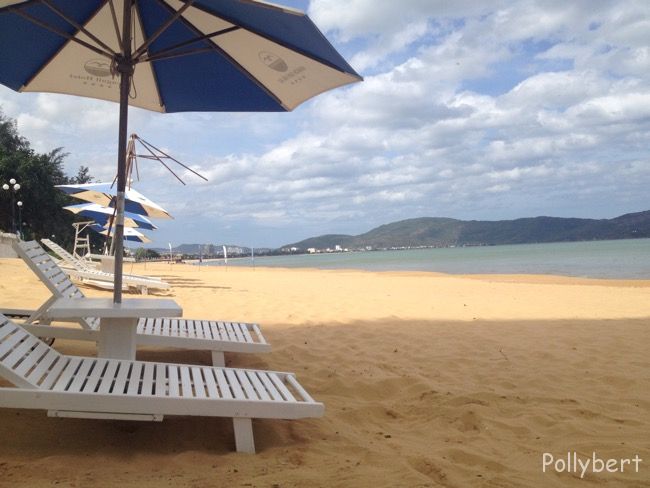 But I could only stay so long at the beach (will I ever do a beach vacation again?) and after an hour or two I was ready for a sugar cane juice. It was served with a dish of salt to cut the sugar. 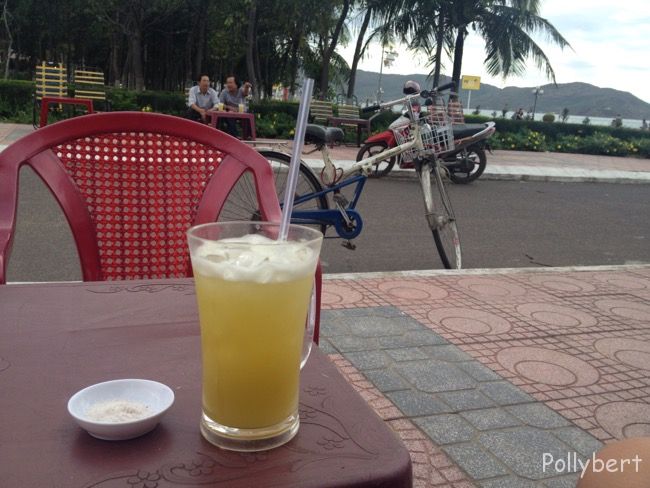 In search of another thing to see I went for the Thi Nai Bridge. Something of it being the longest over sea bridge or so appealed to me. It was definitely worth seeing. Yeah, can’t really tell you anything about it because I never found it. But I found a massage place that was not on the map. When I passed it I decided to forget about the bridge, I was on vacation after all and have a massage instead. It was glorious!

Dinner were rolls again at the same place as the day before. They were as good and crunchy as I remembered them. After that I just cycled home and watched GoT. Yours, Pollybert