My next destination was a small beach town call Quy Nhon. I had heard about it while visiting Sa Pa from a fellow traveler who also wanted just to relax without masses of tourists.

When I woke up that morning I noticed that the electricity was down and later heard that the government shut it down for the day in Hoi An. It didn’t really matter to the people though, life still went on as before.

I took the bicycle and went to the old town, sat down for coffee next to the Japanese covered Bridge with a view on the river. It had something magical to sit on one of the small plastic chairs and watch the locals going about their business. They meet for coffee before going their separate ways to work. It’s something I do at home too but not often enough. The day starts so much better when you see your friends first thing in the morning.

Back at the Homestay I finished packing and around 11 my shuttle came to bring me to the train station. The shuttle turned out to be a private car and we picked up only one more passenger along the way.

This was a woman who needed to go to the airport and while we couldn’t communicate she was super friendly and always touching my hands and my arms. Not in a weird way, more like letting me know that she appreciated my ‘Xin chao’ (hello).

At the train station the usual hustle and bustle awaited me and with only an hour delay I boarded the train. I had booked just a seat since the journey would take about 5 hours, so there was no need for a bed.

The wagon was full of Vietnamese, including a large group of high school teachers who traveled to HCMC (=Saigon). Again I had to find out that the English teacher was not able to communicate (at the Farmstay one of the receptionists was an English teacher and we talked a lot for her to practice; was a slow going I can tell you. But it reminded me of my high school teacher who couldn’t speak and had an appalling pronunciation). Nonetheless with the help of the English teacher I could tell the chemistry teacher what to do with his iPhone. Everyone was lovely, they offered me some lunch and later helped me get off the train. The little blue chair was used by their tour guide. And the man in front with the jeans shorts and I had a good chuckle when someone behind me was snoring so loud that the wagon fell silent. 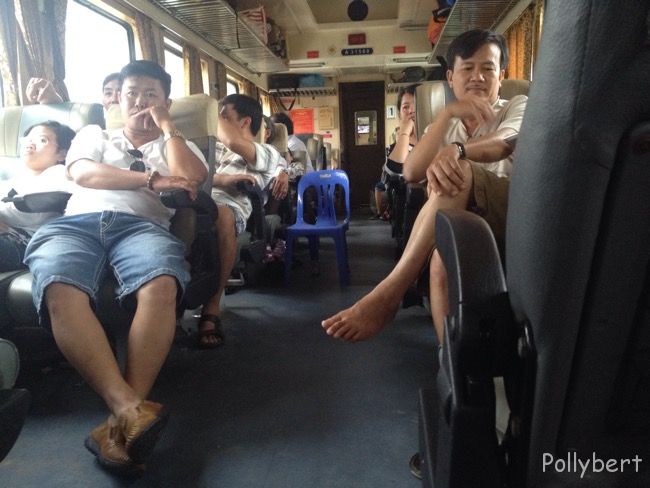 Once I arrived in Quy Nhon I took a taxi to the Hai Huong Hotel. The first thing I learned about non tourist places was that everything closed early. So after checking in and having a shower I rushed downstairs to ask at reception where I could still get dinner.

I walked a couple of blocks, saw a beauty salon on the way (which I kept in mind) and came to a bigger street leading to the beach. There I saw a small place that looked inviting and had one Western looking guest inside.

Since tourists were rare I asked if I could join him. Hans from Munich was a fountain of information due to his travels in South East Asia the last couple of years.

After an interesting dinner, a duck soup which included all the bones (the duck was cut in small pieces and then cooked; no de-boning here), and a shared pitcher  I called it a day and went back to my home for the next four nights. Yours, Pollybert