After the stressful journey to Luang Prabang Dudley needed the next day to recuperate. So while we had breakfast together he went back to his room after and checked my Lonely Planet for what to see in the center.

As it turned out there would not have been any need to check for something since what was right downtown I found and the rest I didn’t see. I took one of the free bicycles from the Le Vang Bua Villa and cycled into the city. First off I found the post office, bought some stamps and more post cards to get at least one card per person to all my friends. I then parked my bicycle right in front of the Royal Palace and started with the palace tour.

Easier said than done, because although I brought a shawl to cover my shoulders in this sweltering heat my dress was too short. For a small deposit I could get another shawl to wrap around my hips. First though I took a good look at the temple right next to the entrance. As everything in Asia there are steps to climb but not as many was there were still to come for me that day. 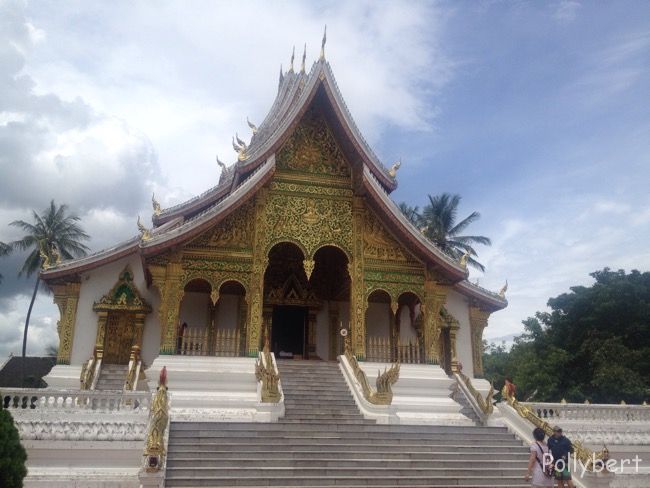 Here is my one and only view onto the palace. There I had to get the second shawl, looking a little bit like a bag lady by then. Also there were no pictures allowed within the palace not that there was so much to photograph anyway. The palace had an amazing reception room and from there I walked once around it to see the private quarters (they looked very formal). 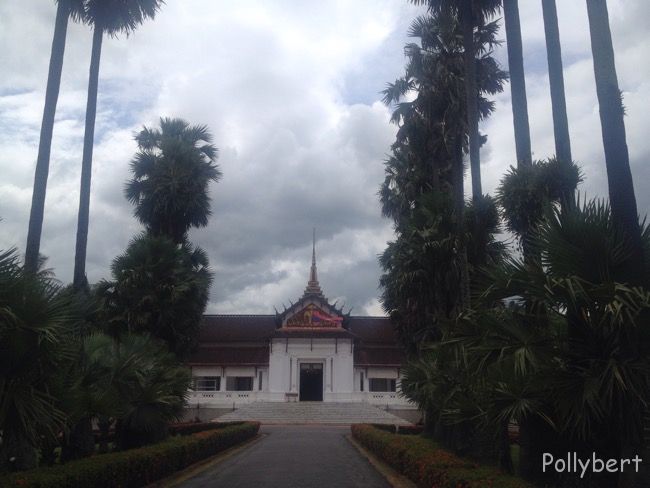 On the palace grounds was a garage with a couple of old cars and there I sneaked a picture.

Once I left the palace I just crossed the street and started to walk up Mount Phou Si.That sounds higher that it was but it was warm and especially humid and I had to overcome again hundred of steps. It really paid off though since the view from the top was beautiful onto Luang Prabang.

On top of this little hill smack dab in the middle of Luang Praban’s old town was the Wat Chom Si, a small golden stupa. I walked around it once trying to take in the view on Luang Prabang from all sides but got sidetracked by a tourist doing yoga right next to it. What the h*ll is wrong with people?

Walking down  I noticed that the daily monsoon rain was looming again (pretty much in the mornings and in the afternoons and then some more in the evenings. But in between it was really good weather) and I hurried down the steps. On the level of the ticket office I saw this tree that had escaped me on the way up.

The rain held off for a bit and then drizzled only slightly so I had a coffee break right next to the river (maybe not so much right next to it, but near and more on top of it). Coffee at all times is wonderful but that afternoon after walking around again in a high percentage of humidity and felt like a life elixir. The drizzle stopped eventually and then the sun came out in full force again. The weather during the monsoon season had a very interesting cycle.

I was wavering between a massage and a snack and decided then to go for a massage. But it wasn’t my day because in the early afternoon the masseuses were holding siesta and I was told to come back later. So you see it is always good to have a back-up plan and I  looked for a place to eat. In the end I stopped at the sandwich market. Really don’t know how else to call it since every stall was selling the same. Fruit juice and sandwiches.

My tuna-egg-avocado sandwich was melting in my mouth, absolutely fabulous! I can only recommend stopping there when you get to Luang Prabang, it’s right next to Mount Phou Si.

The rest of my day was spent looking for a different way back to the hotel (actually I thought it was a short cut, but I told you already I don’t have it so with directions  and map reading), napping next to the pool and finally eating dinner with Dudley. Nutrition wise it was an excellent day! Yours, Pollybert