On my first day I had booked tours for Ha Long Bay and Sapa. So Ha Long Bay was where I was going today. Pickup was again at 8:30 and with one bathroom stop at a store/workshop that sold products made by handicapped people (who sat inside and worked) we arrived at our destination. You know I always wondered how these “workshops” financed the bathrooms etc. But there are an amazing number of people who buy overpriced and mostly ugly stuff there. Later on my trip I met a couple who bought a very expensive jewelry painting at one of these stops.

At around 12:30 we boarded a small boat to get shipped to the cruise boat the Legend. 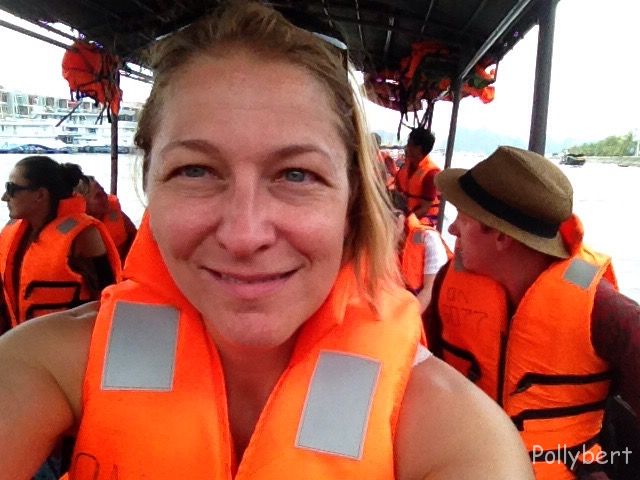 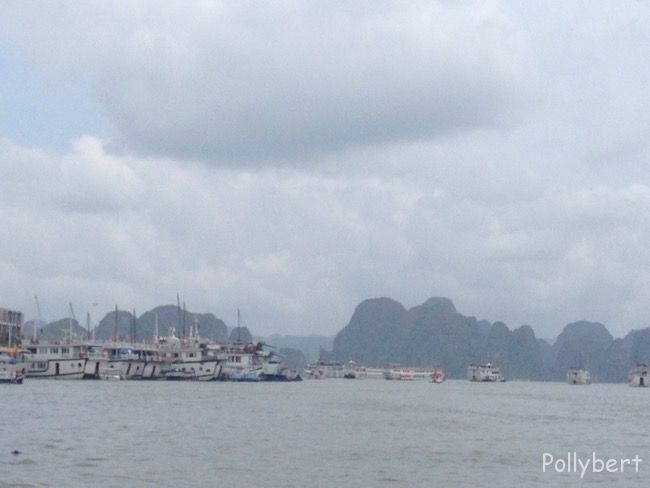 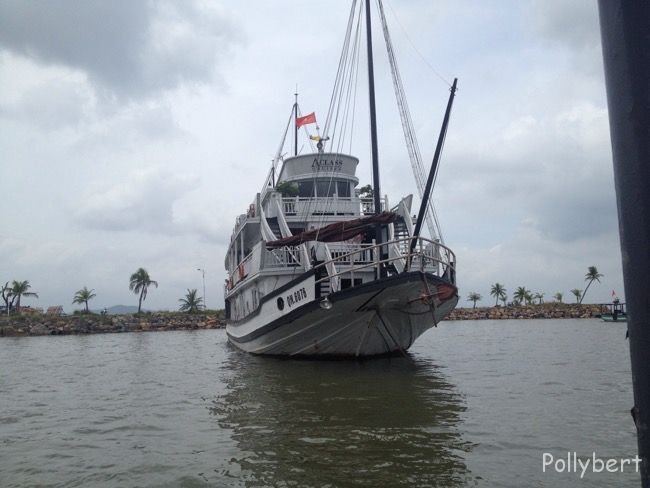 After a short intervention from my side I got eventually settled in a cabin on the upper deck (my first one was on the lower deck next to the machines; what up with this treatment of single travelers as second class customers?) and a few minutes later we all went to lunch.

Our first stop on the cruise was a floating village (now almost abandoned) to which we could either kayak or get rowed. I decided on the latter which was a wise decision as I would see the next day. 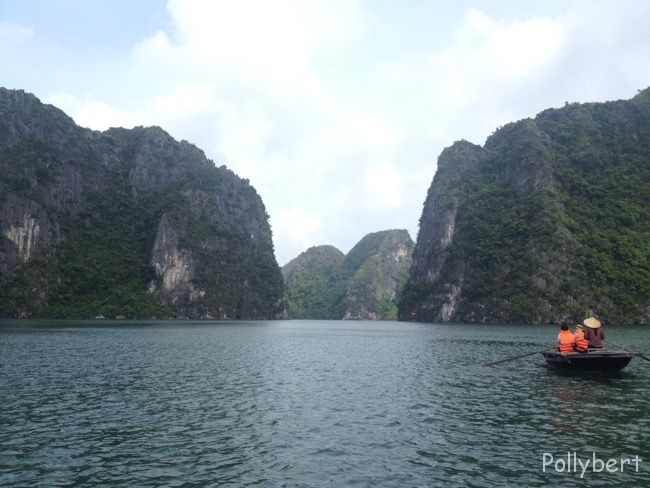 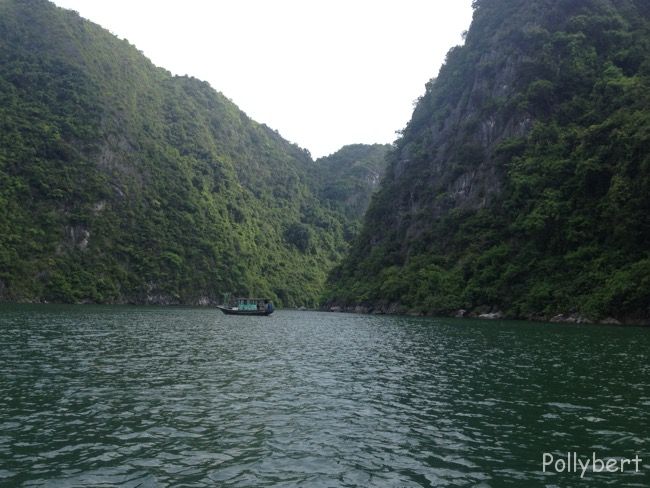 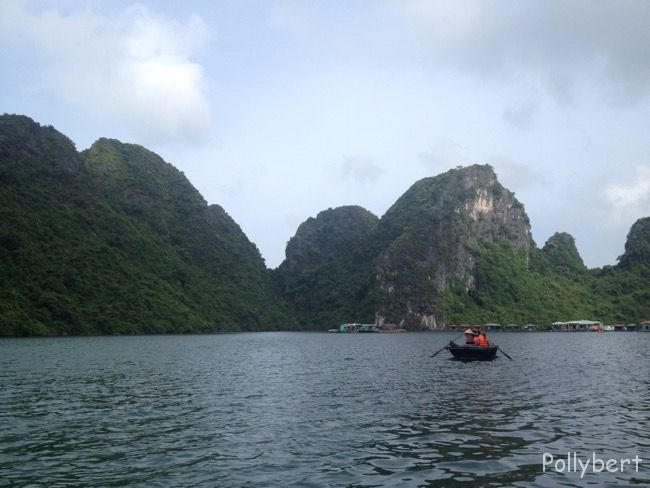 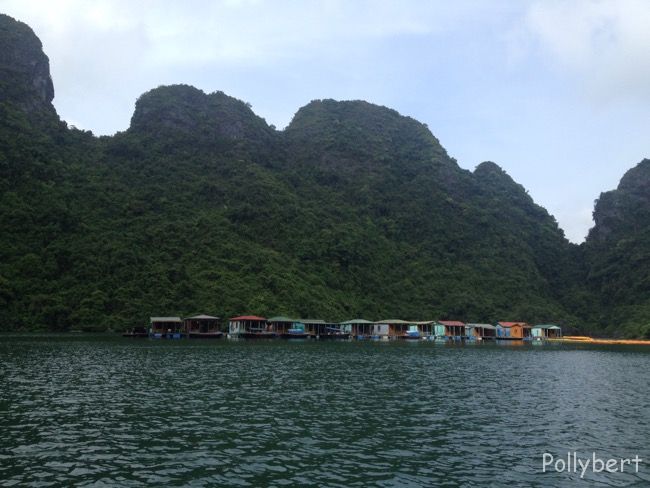 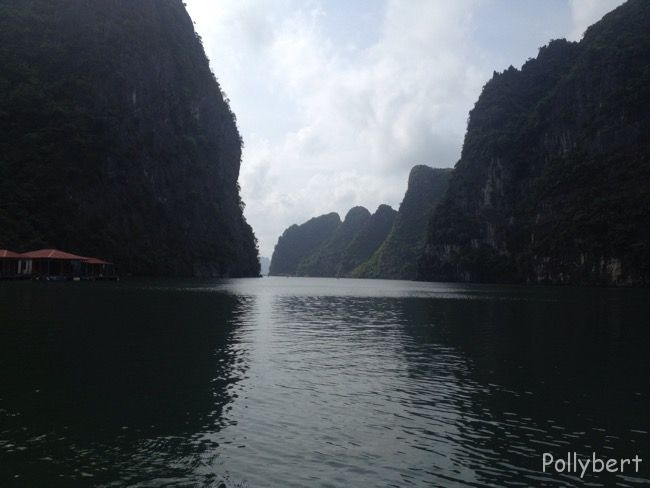 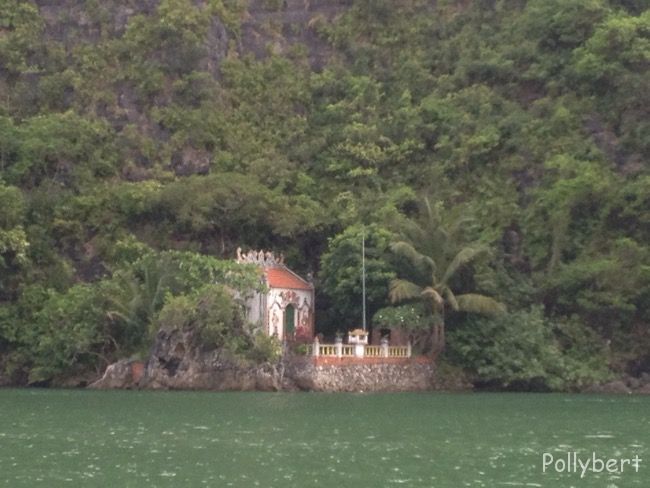 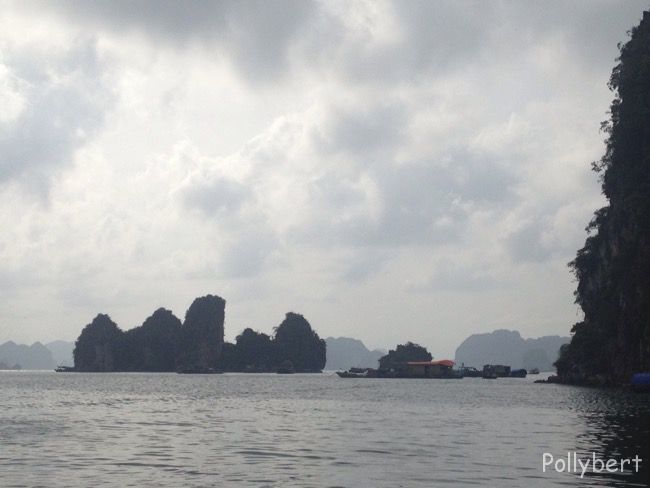 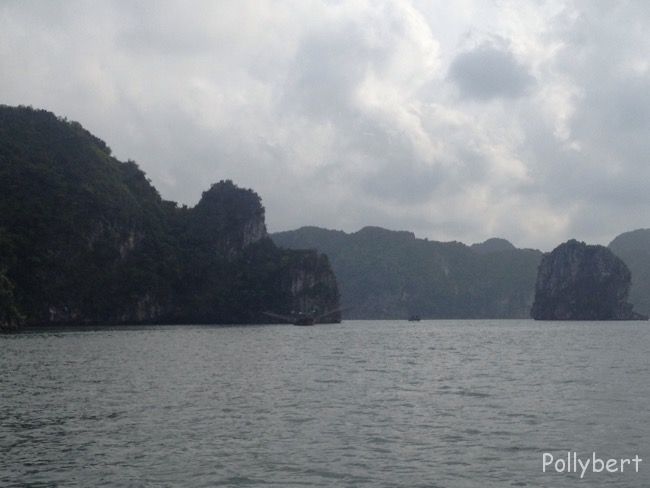 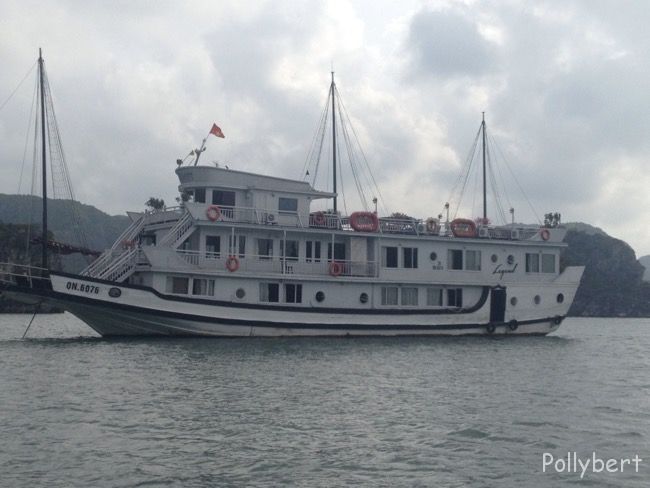 Next up was a swim stop at a beach with a small pagoda on top and while going there we had lots to see again. 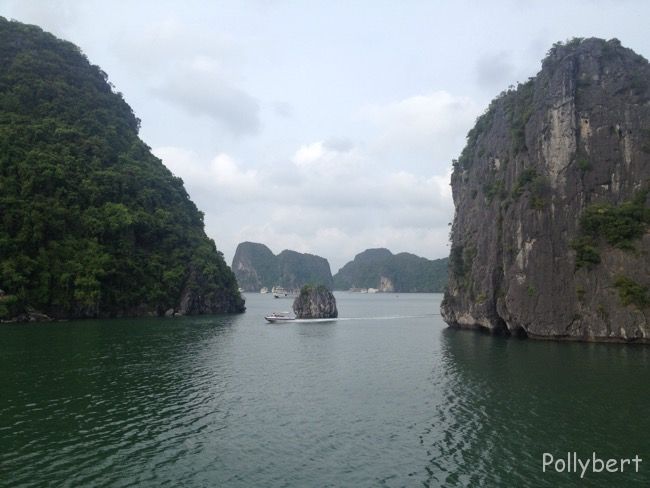 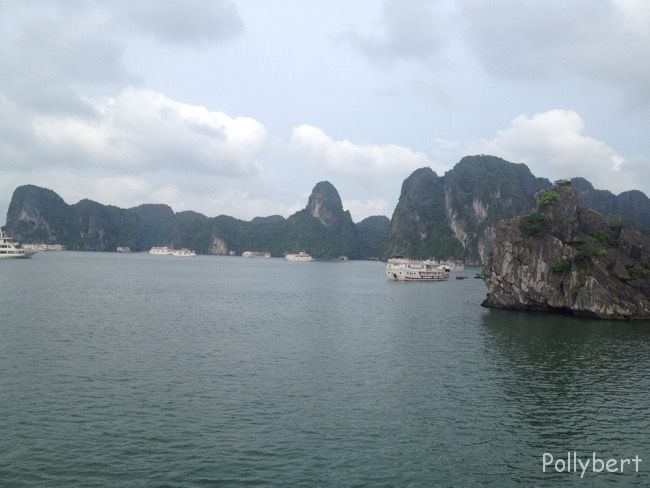 Vendors could even be found at sea. With the long fishnet she would pass her goods up for inspection and if you wanted to buy something you put your money in for her to take it down. 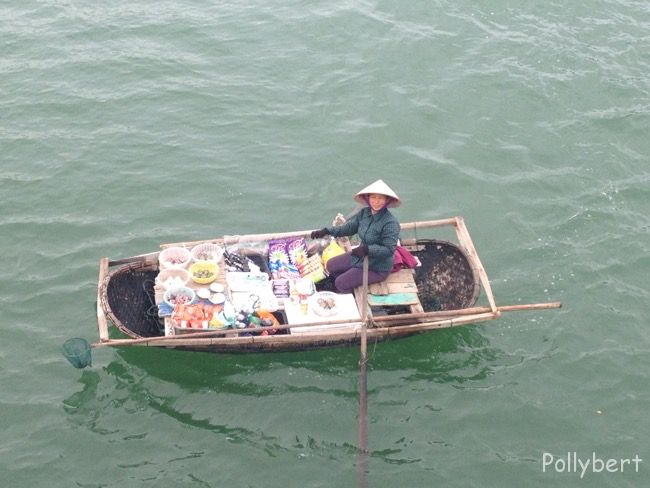 Again with the little boat (always wearing life jackets!) we went to the small island and first up I headed on top of the pagoda to get it done and then enjoy a swim after. We were lucky with the weather, the view was quite alright. 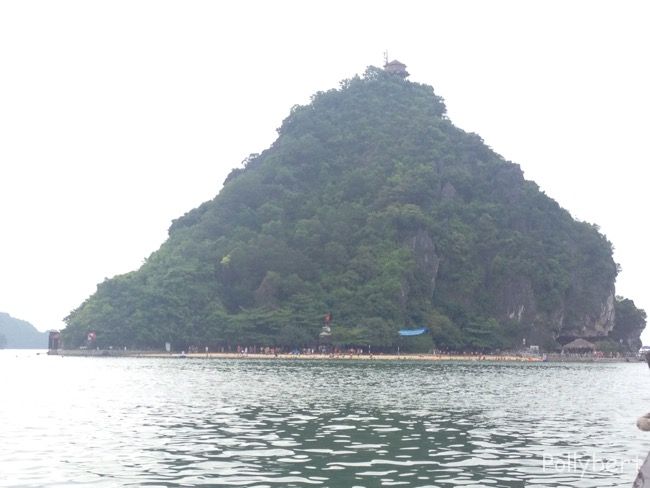 As always there were steps and more steps to reach the top.

But the halfway point made it already worthwhile. 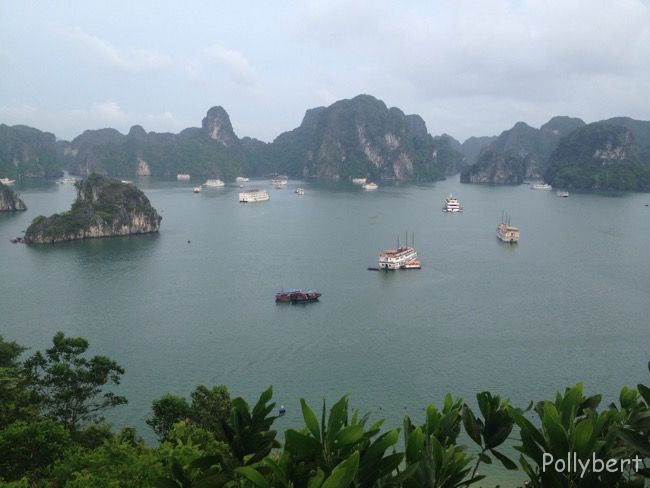 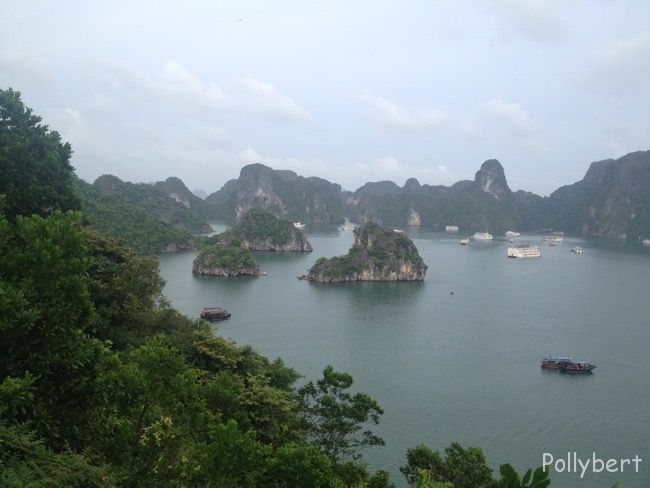 And then the view from the top was breathtaking. 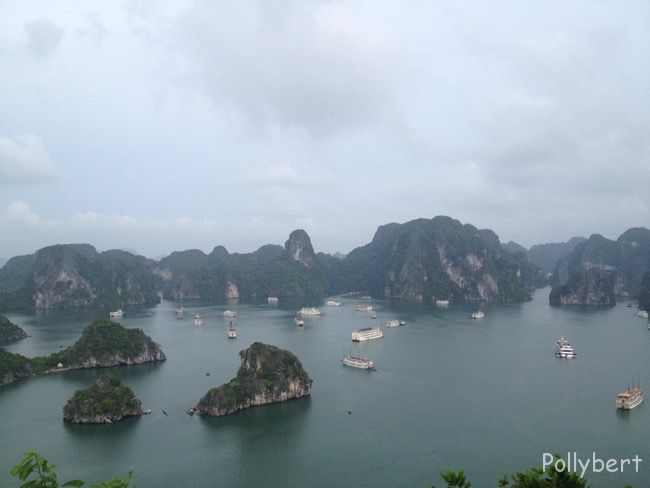 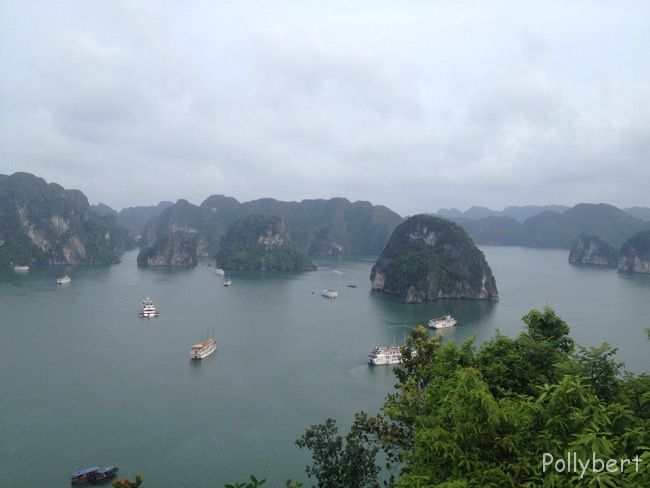 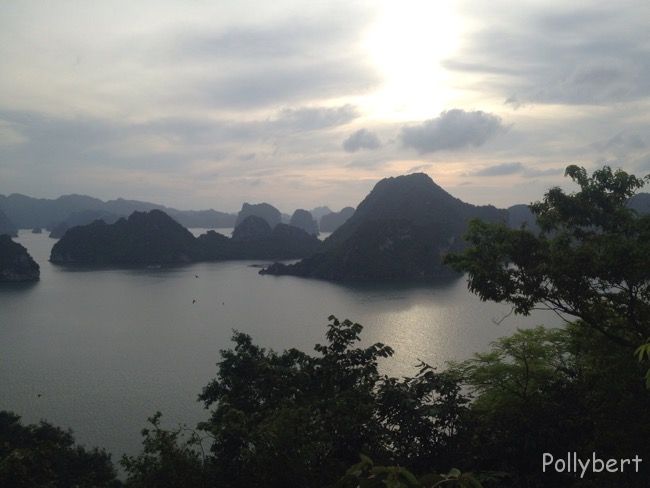 The swim after this short excursion was refreshing and well deserved. This was actually my first swim on the trip so far. You can imagine how much I loved it.

With the little boat we went back to our cruise ship where already drinks and fruits awaited us. 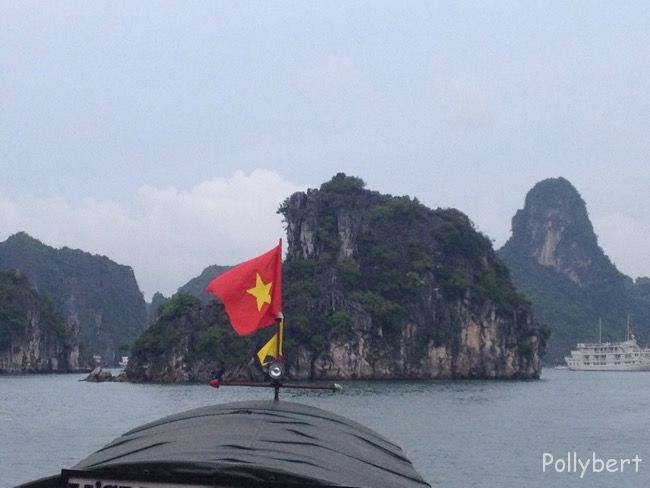 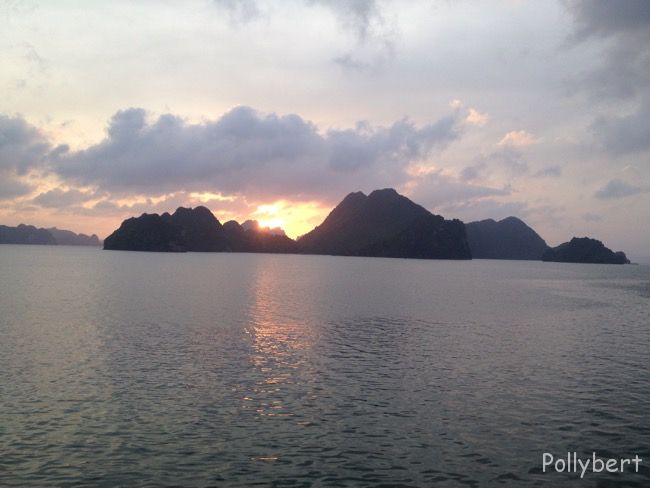 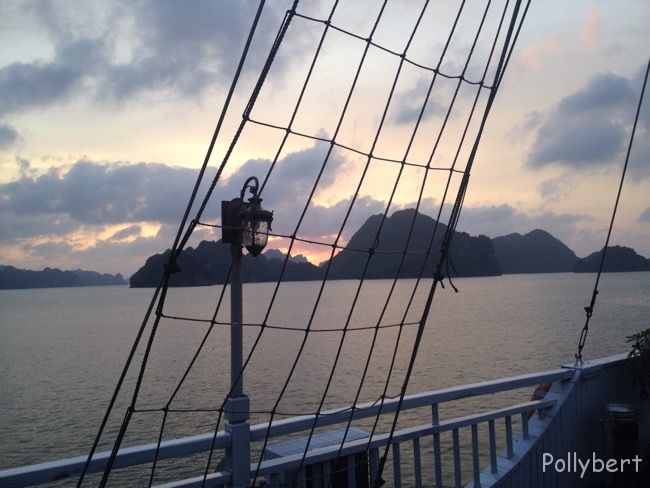 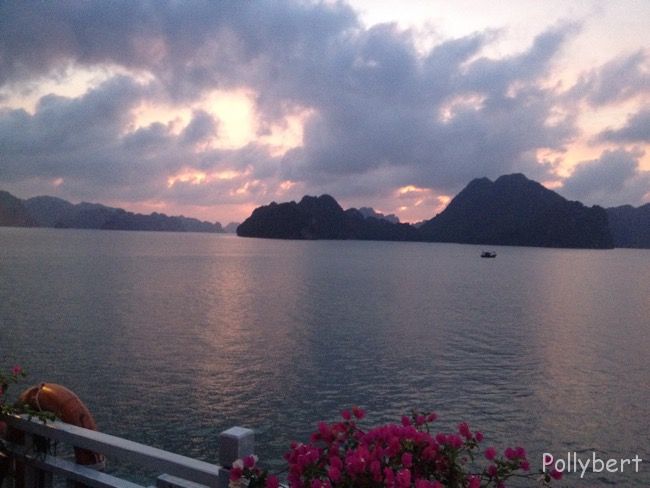 Dinner on the cruise was an excellent affair and I am sorry to say that I took only one picture. So here we go, please enjoy the shrimps.

After dinner we tried our hands at squid fishing but with no luck. The season for them was about  months earlier or so. Still it was fun to be on deck, sipping a cool drink and talking to other guests. Sometime later I went to my cabin to get a good night’s rest. Tomorrow we would be off early again. Yours, Pollybert